Sounding like a brawl waiting to happen The Herd, the latest EP from Israeli band Whitenoise, is a riot of rock ‘n’ roll which has no need of charm and measured persuasion to ignite the passions. Though not ground-breaking stuff, the three tracks making up the encounter rage and stomp with all the voracity and attitude you would wish from a bruising confrontation. It barges through ears, accosts the senses, and intimidates the imagination for a thoroughly agreeable and satisfying rampage.

Formed in 2004, the Tel-Aviv hailing Whitenoise was formed by four childhood friends whose parents were all immigrants from Soviet Russia and migrated to Israel in the early nineties. 2011 saw the release of their band’s debut EP New Breed, a year also finding the quartet co-headlining the Rock-Line festival in the city of Perm, Russia after Whitenoise won a 300 band contest. Backing their success up the following year by playing with Caliban on their 2012 Russia/Ukraine tour, the band set about recording The Herd in 2013 with its release coming towards the rear of last year. With lyrical inspiration coming from personal life experiences and exploring emotions such as anger, pain, depression, love and dreams, the release and its songs are abrasing and confrontational with a hunger and energy which is as magnetic as the sounds within.

Opener 4 AM is instantly coaxing with punchy beats and enticing riffs bound with slithers of what will emerge to be potent hooks. It is soon striding purposefully as vocals and guitars rage and 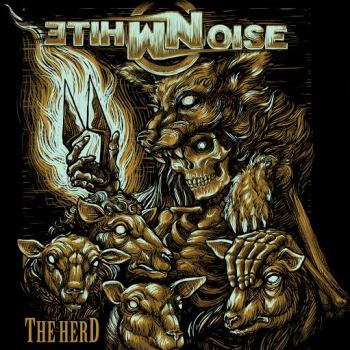 flame respectively within the broadening rhythmic frame of the track. It maybe has a familiar and unsurprising canvas but over it the band creates a fiery and incendiary web of ideas and enterprise. It certainly comes with an air of something already known, but there is little predictable or unrewarding to what is a excitingly rowdy and inciting slab of dirty rock ‘n’ roll.

Second song Between The Lanes suffers a little by being sandwiched between two outstanding storms, the final song Near Life Experience as impressive as the first, but still rampages with a tenacity and anger which leaves ears and appetite wanting more. Spewing animosity and fury with every harsh riff, spill of vocal spite, and lingering groove, the track is a formidable and pleasing protagonist, though with the certainly skilled but uneasily lying melodic detour that the song takes it loses its grip. The solo is undeniably superbly sculpted and presented but for personal tastes feels out of place in this particular song, defusing its potency as a killer track.

The closing Near Life Experience has no such problem. The best track on the release it is a predatory prowling from its first breath as riffs and rhythms harass ears with pack like aggression and tenacity before finding a heavier and darker gait and shade to their character. That again is a mere moment in the passage of the song, the band subsequently swinging with a new anthemic and virulent tempting before repeating the whole carnal offering again. Locking death and groove metal with wonderfully unwholesome heavy rock, the track is a riveting and blistering stalking of the listener and easily the best moment on the impressive EP.

Whitenoise still feels like a band growing their sound but with tracks like those igniting The Herd; expect to hear of and from them in increasingly impressive terms from hereon in.