Opening up the 2015 with a reboot of their second EP Burn The Skies, UK metallers Unforseen Prophecy are seemingly poised to awaken a greedy spotlight on their rather flavoursome sound. The three track encounter, without quite managing to find a striking uniqueness, leaves ears hungry and satisfaction full as it brews up a raw and potent blend of inspirations from the likes of Devildriver, Lamb Of God, and Malefice with a Lacuna Coil like melody and harmony rich temptation. Burn The Skies does not quite set the heart racing it is fair to say but certainly it sparks an increasingly eager appetite to thoroughly explore the Kent quintet and their accomplished invention.

Formed in 2010, Unforseen Prophecy has earned a strong live reputation, taking in shows with the likes of Malefice, Exit Ten, Silent Descent, Beholder, Bull Riff Stampede, Evil Scarecrow, and Seven Deadly along the way. Equally their five track debut EP Without Consequence stirred up keen support and attention from its release in 2012 whilst last year saw the band win the Kent Metal 2 the Masses competition which led to a successful appearance at Bloodstock. Burn The Skies revealed upon its initial release a potent step forward in the band’s imaginative songwriting and resourceful sound and its nationwide unveiling this month has the potential to open the strongest awareness of the exciting band yet. 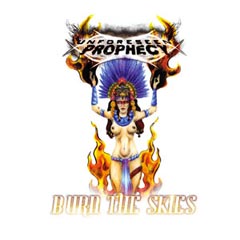 stamping stride of angry riffs and threatening rhythms. Bound in an equally addictive grooving it is an empowering and thrilling entrance to Burn The Skies which dips slightly when it relaxes for the entrance of the alluring melodic voice of rhythm guitarist Charis Pattison, though Wells is still there challenging with his great abrasing tones. The song is soon back in control of senses and imagination as the excellent creative swings of drummer Russ Edwards are courted by thick enticements from the guitar of Aaron Jones and bass shadows provided by Paul Gills. The song continues to flirt and intimidate with anthemic persuasion and enthralling enterprise. As the EP, arguably the song is not offering anything strikingly new but for technical craft and untainted enjoyment it leaves no doubts.

The following groove laden stroll of The Placebo Effect keeps things on a high, though it takes a little longer to grip compared to the more instant success of its predecessor. Wells is soon raging across its stirring canvas of aggressive sound and resourcefulness, the guitars a busy harrying of ears whilst rhythms are as predacious as the grooves are virulent. Unrelenting in its examination and stalking of senses and thoughts, the track emerges as our favourite confrontation upon Burn The Skies though the opening melodic charm of Oblivion soon makes a seductive argument. With the vocals of Pattison ebbing in potency at times though, and the fury of the track missing the spark of the other two incitements upon the EP, the song pleases without raising the same excitement and ardour. Technically the song is as riveting and impressive as ever though, revealing more of the band’s tenacious and imaginative enterprise ensuring the release ends on a strong if not dramatic high.

Whether Burn The Skies will open up the doorway to the major awareness it is easy to feel the band is destined to walk through of course only time will tell but it does mark Unforeseen Prophecy down as a band UK metal will be eagerly embracing sooner rather than later.

The Burn The Skies EP is released nationwide on January 5th through all digital platforms.