Grizzlor – When You Die EP

With so many releases presenting themselves each and every week it is easy for a fair few gems to slip under the radar without an additional nudge in their direction. Such would probably have happened with the When You Die EP if drummer John from its creators, the noise/dirt rock trio Grizzlor, had not offered an invitation to check out the four-track treat. Released via Money Fire Records, the EP is a raw and ravenous cauldron of noise and voracious intensity which is also unafraid to throw in the heaviest sludge bred endeavour and toxically seductive grooves. There is plenty more to their abrasing tempest of sound too, all revelling in the fuzz filtered tempest the band casts over the senses.

Hailing put of New Haven, Connecticut, Grizzlor was formed in 2013 with vocalist/guitarist Victor and bassist Wade alongside John. Their self-titled debut provided the first statement of noise last year whilst 2014 opened with the release of its successor We’re All Just Aliens, both providing great early hints and clues to the growing emergence and evolution of a sound which has hit a new plateau within When You Die. The band’s third EP can and should be the gateway to the broadest spotlight for the band, as long as there are plenty to nudge it in the direction of unsuspecting ears like ours were previously.

No Time sets the corrosive carnival of predacious sound off in gripping style, its first breath thick voracious smog of crunchy riffs and rumbling rhythms cast in a grizzled throated bass embrace which alone has the juices leaking. Bass and guitar make a ridiculously compelling bait, at times almost Morkobot like in its uncompromising persuasion, whilst the equally raw and honest tones of Victor and the pungent web of beats from John only adds to the lure and drama of the encounter. Grooves flirt from within the oppressive sludginess of the song whilst sonic temptation within the psyche rock seduction of the tempest, is as sultry as it is mesmeric.

The outstanding start leads into the psychotic bedlam that is Plaster Cowboy, manic squalls from Victor the prelude to a rampaging stroll of meaty jabbing beats and an impossibly addictive 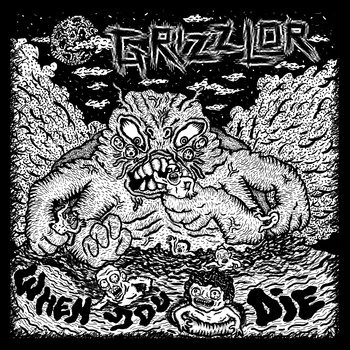 bassline. It is soon immersed in a caustic mesh of guitar abrasion, the song twisting and launching in unpredictable and riveting style like a mix of The Screaming Blue Messiahs, Melvins, and KEN Mode. There is also in many ways an element of the senses grazing rabidity which drives The Mad Capsules Markets to the sonic turbulence and tenacity spilling from within the songs creative fury. Adding a delicious strain of surf rock to its melodic acidity too, the track soon steals top honours on the release though it is soon rivalled by the salacious scuzz tempting of Stoned where sludge and noise collude with garage punk and again a surf bred devilry for a compelling seducing of ears and imagination alongside a lingering erosion of the senses.

Closing things up is Mini Spaceships, another provocation of chunky riffs and intensive rhythms ridden by antagonistic vocals. Once more that toxic surf tempting is permeating every pore whilst the seriously captivating ferocity of the beats and grizzly riffs leaves a deep hunger for much more.

There is nothing polished and arguably welcoming to When You Die yet it is one of the most gripping and inescapable joys of the year. It offers music in its rawest and most primal ingenuity with an invention and devilry which only ignites the passions. Noise rock has a new heir to its throne and it is called Grizzlor.

The When You Die EP is available now via Money Fire Records digitally or on 7” vinyl @ http://grizzlordestroys.bandcamp.com/ or http://moneyfirerecords.bandcamp.com/album/when-you-die

Like Loading...
‹ Void of Kings – Stand Against The Storm
The Top Twenty Metal/Rock releases which most excited The RingMaster Review in 2014 ›