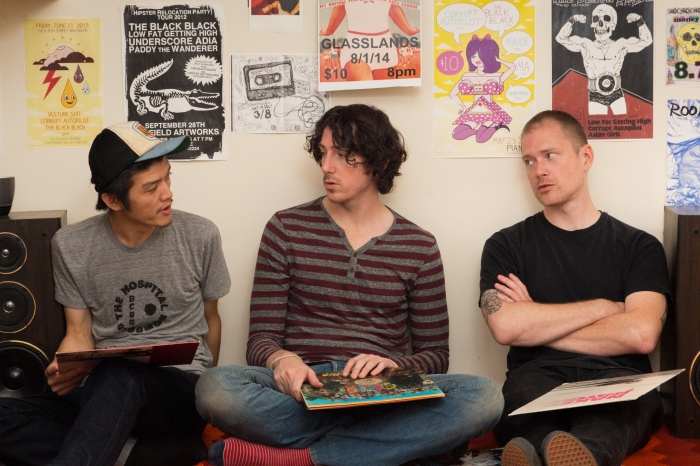 There is no denying that the One Blunt Death Party / You’re A Danger 7” single from The Black Black towards the end of last year, scored a deep rooted place on the soundtrack of our and a great many other’s passions with its three tracks of psyche flirting post punk. The release was not only confirmation of an already impressing emergence from the Brooklyn band but a sign post of greater exploits being brewed. It is a recipe which has come to a scintillating and seriously compelling boil on the trio’s debut album Boogie Nights, a salaciously contagious and schizophrenically toned incitement of post punk devilry. Inspired by the 1997 movie of the same name, the album is dirtily seductive and sonically swarthy, though no fakery in colour or overblown additives can be found on the lean and creatively rapacious groove machine. If you thought The Black Black was already the tang to your ears and day, be prepared for melt down once the rhythmically voracious and sonically irresistible Boogie Nights takes hold.

Formed in the latter months of 2011, The Black Black were soon luring attention with the self- release of a pair of EPs in 2012 and a split 7” with fellow Brooklyn band Low Fat Getting High. The early weeks of 2013 saw the band entering the studio with drummer Stephen Chopek (The Everymen) to record the double-A single One Blunt Death Party / You’re A Danger, the first for Money Fire Records and released in the September of that year. It was the spark to a far broader awareness and attention upon the band, the acclaimed release also in the words of the band, the first which “truly captures the bass-driven, groove-heavy sound and energy of the band.” With drummer Tomo Ikuta joining the founding pair of guitarist/vocalist Jonathan Daily and bassist/vocalist Chris Schnaars also that year, the band has obviously continued to hone their sound and invention resulting in an album which stalks new plateaus of imagination igniting alchemy.

From the first stubby rhythmic swipes and acidic strikes of guitar, opener the plan is, there is no plan has thoughts and appetite on their feet and throwing moves. The angular spicy sparks and grooves of guitar are instant flirtation which the wonderfully throaty bassline and crispy rhythms match in imposing kind. Teasing with a bluesy scent to those grooves and its air, the song continues to rumble and shuffle vivaciously as expressive vocals behave as mischievous and predatory as the sounds around them whilst sudden dips into restraint and melodic seducing add extra bewitchment.

The tremendous starts is straight away emulated by black black snow, the second song again throwing out wiry and tasty grooves as its body swings beats and riffs like an Ian Curtis dance.

Thoughts of Wire come to the fore quite swiftly, as too of The Gaa Gaas whilst the raw and rhythmically addictive side of the track is bred from the same primal instincts as The Fall. The track is a scuzzy turbulence of pure addictiveness and sonic sexiness, but it and its predecessor soon have to bow before the brilliance of until death do us party. The lead single from the album, it is a temptress from start to finish with a compelling acidic groove, coldly exotic hooks, and anthemic vocals as its biggest weapons out of many. Discord as ever is a vibrant colour to the band’s sound whilst a toxic melodic hue only excites the already vivacious adventure, but with grizzled bass tones and agitated rhythms courted by Mekons like sonic tenacity, the track breaches an ingenuity which is breath-taking.

The following what the world needs now strides purposefully in next with a beat carrying bulging biceps and a grizzly bass enticement which soon has the appetite licking its lips. A low tone to the vocals adds to the addictive drama before the song expels a caustic breath and garage rock ferocity. It slips through both elements again before twisting into a psychotic swing and vocal bedlam which again has body and thoughts dribbling in pleasure. The glorious tempting takes a different avenue with the darkly shadowed machine, who me?, cold almost sinister essences draping over the vocal agitation and Joy Division seeded revelry. As in all encounters though, numerous side steps and unpredictable turns bring greater fascination and ardour the way of the eventual Baddies flavoured evocation.

The previously exalted you’re a danger soon has ears and feet engaged with its slightly unruly but seriously infectious sonic emprise. Wrapped in richly spiced tendrils of melodic fire and intimidating bass menace, the song simultaneously smoulders and stomps on the way to hypnotising the senses with its unrelenting and feverish tapestry of alluring discord and searing guitar toxicity. The track as so many from the band, just seems to grow and worm deeper under the skin over time, a persistence which flows through the album and especially in songs like this drink’s familiar. Shimmering loudly with every shudder of guitar strings and grouchily tempting with every bass slap, the song slowly swarms over the senses, flirting with ears on the way through with bright flickering moves and raunchy beats.

Things get dirty and greedily energetic again with the silence is deafening, a grooved beast of riotous and infection fuelled escapades, and restrained with the sultrily tempting phillip gets divorced. The second of the pair is unafraid to occasionally fire up its bedlam though and bursts into occasional fierce blazes of sound and vocal fury, whilst both songs treat the imagination and passions to exhilarating doses of bracing and abrasing rock ‘n’ roll.

With the similarly irresistible creative psych-out of this land is not your land bringing the album to a close, Boogie Nights has little difficulty inflaming old passions and triggering new lustful responses. It is a certain challenge to all best of lists due to be offered around now and for newcomers to The Black Black an inescapable and thrilling doorway into post punk anarchy whilst for fans it is simply the best thing since…well the band’s last sonic plaything.

Boogie Nights is out now via on Money Fire Records digitally and on 12″ white vinyl @ http://moneyfirerecords.com/boogie-nights-by-the-black-black/ and http://theblackblack.bandcamp.com/album/boogie-nights