Crawling shadows and serpentine seductions: coursing the depths of Sidious with vocalist/guitarist Isfeth.

The recent release of Revealed in Profane Splendour from British blackened death metallers Sidious, showed that the band’s first EP Ascension to the Throne Ov Self was not just a flash in the fires of hell. It was also compelling evidence that the band had discovered and was exploring even richer depths to their sound and intensive invention. The time between releases also saw the band facing line-up changes whilst forging equally potent heights with its members other projects like Eye Of Solitude. Revealed in Profane Splendour provides an insatiable temptation of sonically carnal and uncompromising raw beauty which skilfully enslaves ears and ignites the imagination. It also sparked a thirst to explore the heart of the band and the corners of their release, so with big thanks to vocalist/guitarist Isfeth we looked at the origins of the band, the impact of the changes within it between release, lyrical inspirations and much more…

Hello Sir and thanks for taking time out to chat with us.

First up can you give us some background to the beginnings of Sidious?

Sidious was founded by Indomitus, Baalrath and I in 2012. We had collectively played together in various acts for many years – particularly in the case of Indomitus and I, for which it has now been 8 years. At this point we had been involved in various death metal acts, yet decided the time was right to pursue our true passion, black metal. The idea had been discussed continuously, but it had to be the right time. We infused our technical and aggressive death metal background with the grandeur and venomous roar of our black metal influences to create our sound.

Many of you are involved with Eye of Solitude as well as having other projects and experiences under your belts. Where or what specifically in Sidious and its sound did you deliberately start exploring which was different to the other bands you are involved in?

The will to create Sidious was always there, it was more a case of waiting for the right time and maturity in our collaboration to act upon it. We initially began exploring darker and more elaborate elements, maintaining the aggression but also focusing on atmosphere.

So the band and its music been brewing up inside in thoughts and ideas long before Sidious was born but was the coming together of the band more a swift let’s get together and see what we can come up with or a long-term process?

There was nothing swift about the process and founding of the band, it had been a long-time coming and had been thought through.

Your debut EP made a potent mark and statement upon its release last year and now you have unleashed the beast that is debut album Revealed in Profane Splendour. Immediately it sung

out in new adventure and exploratory evolution from its predecessor; how from inside the band do you feel your music and the album has moved on from the Ascension to the Throne Ov Self EP?

The line-up has changed since the EP, the departure of Void (vocals) and Fahim (drums) resulted in the recruiting of Khrudd (drums) and repositioning of myself to vocalist – whilst continuing my role as guitarist. I feel the music has evolved naturally during this process and we have further refined our sound. The album conveys a more intense array of emotions and certainly a wider range of influences.

In our review we described Sidious as blackened death metal but the album shows there is a maelstrom of flavours and elements which make up your incitements. Were there specific elements you went after on songs musically or was it predominantly an organic emerging of ideas and tracks?

When writing a song, it typically starts with an emotion or message we want to convey within its contents. An example I can give here is Infernal Reign having a barren and cold atmosphere to represent complete isolation from religious hypocrisy. Sections of the tracks, including speed riffs and the more technical elements, are added during the process, which are either brought in by a member or collectively written in a more organic writing session.

Are there any inspirations which you might say have added a colour to your music, or certainly sparked ideas within Sidious?

By majority we are all big fans of classical music. This has inspired our use of orchestral elements and added to our overall sound. Both Baalrath and Indomitus are classically trained to a high standard. Khrudd and I are big fans of depressive and atmospheric black metal, so there is also influence in that respect when concerning atmosphere and ambience. In terms of lyrical content I am inspired by literature concerning anti-theism, and Satanism.

Talking lyrically the album is as brutal and antagonistic as it is sonically, what was the core bait for your furies on the album?

My lyrics seek to denounce religious systems and ignite the realisation of self-potential and purpose. I am enraged by the continual recycling of ancient ignorance. There is no place for it. The masses pander to the foreboding call of failure; it sculpts the existence of the weak and leads them blindly into an inevitable void. Although the themes are consistent throughout, I present them in various forms. This ranges from anger and complete hatred, to the stating of principles and demands, many of which are based around my personal interpretation of Satanism.

Tell us about the recording of Revealed in Profane Splendour; did you approach it any differently to the previous EP especially with new members involved and musically did you explore any different ideas and technics with the album compared to your other projects?

We recorded again with Russ Russell at The Parlour Recording Studio. Russ is a master of his craft and working with him is always an inspiring experience. We did explore a sharper and more aggressive guitar tone for the album and also spent considerable time finding the right sound for the orchestral and atmospheric elements.

Was the album mostly complete going into the studio or did it evolve more in that scenery?

I would say the album was 90% complete before entering the studio. We always leave a little room for improvisation and spontaneous ideas – from experience, being in a studio setting, particularly with Russ Russell, inspires all kinds of ideas. We always aim to create something authentic.

How long did it take to bring the album to life and was it difficult to bringing it all together because of your other bands any time restraints etc.?

The album was written over 6 months – within which we met up pretty much every other day. The recording process took a total of around 11 days. There was no difficulty in bringing everything together, we are always focused on what we want to achieve.

Sidious has seen a couple of changes in personnel as you mentioned earlier since the recording of the EP, how did that specifically impact if at all, on the band and more so the recording of Revealed in Profane Splendour?

The key song writers in the band have remained consistent throughout the line-up changes, so there were no major changes during the writing process. The addition of Khrudd (drums) naturally added a new creative element to the drum tracking. The realignment saw me take over vocals and therefore naturally gave me a dual role which I embraced completely.

Additionally taking on that role how does that affect songs with obviously no voice being the same; did you have to tweak existing tracks slightly in that department for your own tones?

For live shows I have certainly presented my own take on Void’s vocals from the EP. The songs have remained the same by majority, and we maintain playing various EP tracks during our live set. 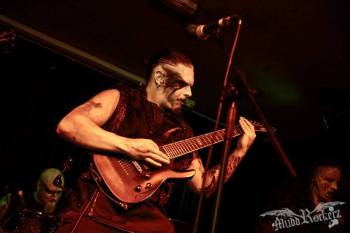 Is there any particular moment on the album which gives you a personal tingle down the spine? For us it is that opening rhythmic coaxing of Sacrilegious Majesty.

The intro to Annihilation Ov Abhorrent Credence and the mid-section of the title track are personal highlights for me.

Going back to Russ Russell, he seemed to find and understand in production the sweet spot between the hostility and melodic beauty which unites across the release?

Russ is certainly a master, he really takes the time to understand the intentions behind a song or section and through him we have been able to present our creations in their full intended form.

Tell us about the outstanding artwork wrapping the album.

The artwork was created by Giannis Nakos of Remedy Art Design. We had worked with Giannis through Eye of Solitude, therefore he was the number one choice. His art is outstanding and we are very proud to encase our music within it.

What is next for Sidious now the album has been uncaged?

We have so far played some nice shows including, main support for Anaal Nathrakh, Kaotoxinfest and Wrongstock. We were recently confirmed for Incineration Fest and are in discussions with another UK black metal band about arranging a tour for next year.

Thanks again for talking with us. Any last words or thoughts you would like to leave us with?

Thanks for the questions.

Read the review of Revealed in Profane Splendour @ https://ringmasterreviewintroduces.wordpress.com/2014/11/05/sidious-revealed-in-profane-splendour/