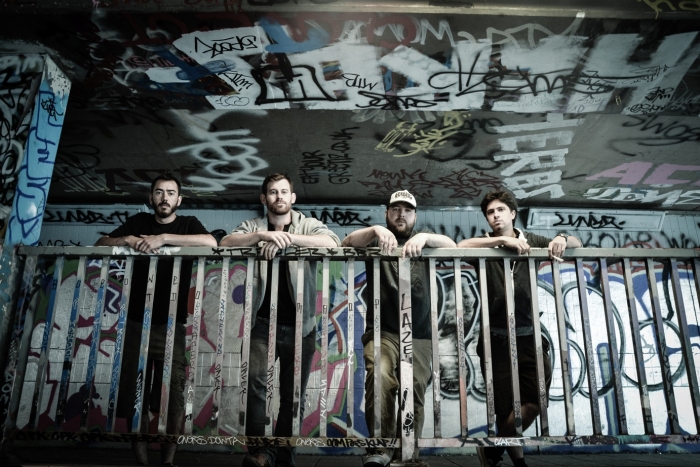 With far more deep rooted grooves than a wet weather race tyre and the torque to seriously send body and senses spinning, Death Rattle from UK metallers Hellbent & Hammered is a wake-up call for ears and attention to the band’s evolution and presence. Formed in 2004, the London quartet has certainly been through the usual obstacle bands come up against as almost perpetual loses and gains in the line-up create a turbulence to defeat most bands. Stability in that area has been found over the last three years or so and as the band’s outstanding and ferocious new EP reveals, Hellbent & Hammered has only relished in and flourished from that calm.

The band wears their inspirations on the sleeves of very note and viciously swinging groove it is fair to say but twists it into a rich flavour that appetites can only become greedy for. The accompanying press release cites Down, Lamb of God, and Clutch as a trio of references merging to fire up the band’s sound, and it really does sum up the potency and force of Death Rattle if not all the fury and raw enterprise fuelling each track on the encounter.

Since forming Hellbent & Hammered has been an acclaimed force on the live scene, blistering stages alongside the likes of Feed The Rhino, Godsmack, ANVIL, Godsized, Thunderhorse, Head-On, and Sons of Merrick along the way. Their groove metal has been an increasingly potent lure across the south of the UK from the start, but with the current line-up completed in 2011 when guitarist Junior Gouch linked up with vocalist Ryan Le Roux, bassist Dr. Jon Casey, and drummer Simon Bullock, the band has in a way shed a skin to their sound in creating an uncompromising and bordering on toxic strain of groove metal as evidenced powerfully by Death Rattle.

The EP’s title track opens up the seductive hostility, riffs and rhythms creating an imposing wall from its first breath before the first flirtatious groove entwines ears and appetite. There is

swagger not only to the increasingly tempting grooving but every mighty swing of Bullock, bassline of Casey, and the grizzled delivery of Le Roux. It is Pantera-esque in so many ways but with a blues toxin and the superb bait of Gouch’s inventive lures and craft, the song provides an invigorating freshness. The first predatory anthem of Death Rattle, the track stalks and overwhelms the passions with ease.

The gripping start is swiftly matched by Hung, Drawn & Quartered; the track showing a more merciful welcome for ears, if only by a hairs-breath, before turning out a relentless rapacious stride of abrasing riffs, crippling beats, and psyche searing grooves. As its predecessor, the song is inescapable in its anthemic tempting and the sonic binding of the imagination, whilst the searing solo of Gouch adds further toxic manna alongside a deliciously throaty stalking bassline which just lights the passions.

The gnarly yet beckoning tones of Le Roux hit the sweet spot too, and in third song All Consuming, which from another irresistible bass bred bait, launches a virulent and corrosive smog of torrential riffery and rhythmic slaughter, he unleashes a delivery of impressive grazing power and fury. The track itself is the most inventive on the release moving from a strong and appealing start into a fascinating cauldron of aggressive adventure and sonic spite.

The EP closes with Built That Way, a powerhouse of rhythmic muscle and sinew sculpted riffs roared over by Le Roux and the blazing enterprise of Gouch. It is an impassioned furnace of grooved causticity amidst a hurricane like energy, with plenty of inventive designs and melodic venom to ignite the imagination all over again.

The track is a tremendous end to a thoroughly thrilling release. There is a familiarity and originality to Death Rattle which aligns for the perfect recipe of grooved mayhem in undoubtedly one of our favourite propositions of the year. Hellbent & Hammered has found the spice to greater things going by their new incitement and the potential to sculpt plenty of major things ahead. A thunderous way to round off a great year of releases sent to us by Garry of SaN Pr, and we thank him for all his help and support, Death Rattle is a must for all groove and seriously anthemic metal fans

The Death Rattle EP is released on Monday 15th December through all digital stores.