Home › Music › EP › Inherit The Stars – Beyond The Beacons EP

Inherit The Stars – Beyond The Beacons EP 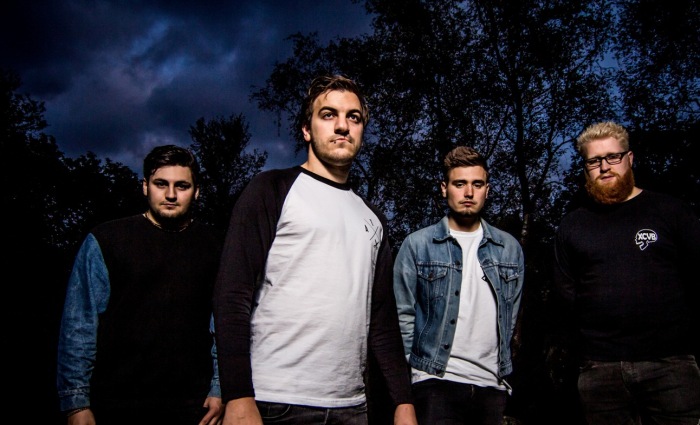 There is no denying that UK band Inherit The Stars is growing into one seriously compelling and impressive band, but it always helps to be forcibly reminded with releases like Beyond The Beacons. The band’s second EP, it is a gripping slab of melodic and voracious metal aligned to tenacious rock and electronic enterprise. It never gives ears a moment of dull peace or expectations the chance to stake a claim, persistently providing a strikingly diverse and flavoursome incitement. It is not without a few elements which do not quite find the same heights of persuasion as others if we are being picky, but Beyond The Beacons ultimately only grips the imagination and passions whilst reinforcing Inherit The Stars As one of Britain’s brightest prospects.

Hailing from Sheffield, the quartet of vocalist Daniel Jeffery, guitarist Chris Brayshaw, bassist Lewis Wild, and drummer Theo Egginton, have earned a potent reputation for their live performances and sound which has been more than backed up by their first EP and debut album Were Made to Walk the Skies. Both were infested with songs which showed inventive songwriting and vivaciously entwined and diverse essences. Beyond The Beacons is no different yet it seems to have a buoyancy and tenacity which moves the creativity and raw power of Inherit The Stars on to greater heights. The press release with the EP suggests that it brings “the potency of While She Sleeps to the electronic wizardry of Enter Shikari and the melodic fluency of Fightstar,” something hard to go against but there is plenty more which only enthrals and excites.

Latest single Still Alive sets the drama of the release off, though its opening caress of keys does not give a real sense of the raw power to come. It is a potent if unsurprising lure, but only around

for a few seconds before a gripping rugged groove binds riffs and rhythms for an imposing tempting. It too is a mere breath in the emergence of the song, it sinking into a relaxed embrace as Jeffrey’s tones begin their narrative whilst crystalline melodies wrap the senses. There is always a sense of drama and impending intensity flirting with ears though, its expulsion through additional vocal roars and predatory riffs an intriguing and pleasing counter to the smouldering elegance elsewhere. Every movement of the track enthrals, vocally Jeffrey persistently impressing whilst the spicy craft of Brayshaw is a constant inventive enticing backed by the predatory rhythmic skills of Wild and Egginton. The electronic elements become more pronounced towards the song’s climax too, adding another hue to the fiery blaze of the encounter.

The impressive start is followed by the similarly radiant presence of Flaws, keys again making the initial colour of the developing scenery. Clean and blistering growls switch and entwine as the song grows, the former it has to be said where Jeffrey especially shines, whilst keys continue with their melodic dance and expression within the expanding tempestuous climate of the encounter. Post hardcore seeded, the track is at its best when the band erupts with their additional vocals for an anthemic incitement matched by the thick enticing of the vocals. The track does fail to reach the heights of its predecessor but keeps ears and attention bound with total ease before making way for the hellacious fury of Exit Plan. The third track brawls with and spills animosity over ears from its first breath, aggressive rhythms and raging riffs emulated by raw vocals. Within the turbulence though, tangy grooves flirt with venomous intent before the track spreads its imagination with electronic spicing and another blaze of contagious vocals. Like a mix of Dead Til Friday and Collisions, the track is a simultaneously brutal and seductive romance for senses and emotions, and another lofty peak on the increasingly striking release.

Better Than This rumbles and soars in equal measure next, the song one which also does not hit surrounding heights yet with its weave of electro and sinew encased melodic invention provides a tapestry which is a constant provocateur. The difference between the song and those it is sandwiched between is marginal, just personal tastes adding their commentary for the main, and it is fair to say that Better Than This only adds to the adventure and raw potency of the release, a success given another shot of thrilling quality by the closing On Our Own. The track is simply outstanding, the best of the EP revealing yet more of the skills and imaginative resourcefulness of the band. As pop as it is muscularly anthemic and as imposing as it is melodically and harmonically poetic, the track is the tour-de-force of the EP, easily the next single to awaken attention in newcomers.

Inherit The Stars was already talked of as one of the most promising bands to emerge in recent years on the UK scene but Beyond The Beacons more than suggests that the band has arrived, though still with further potential and depths to be tapped. A prospect hard to keep anticipation and expectations grounded for.

The Beyond The Beacons EP is available now as a name your price digital download @ http://inheritthestars.bandcamp.com/

Tags: Alternative Rock, Beyond The Beacons EP, Enter Shikari, Fightstar, Inherit The Stars, Post Hardcore, RingMaster Review, Were Made to Walk the Skies, While She Sleeps