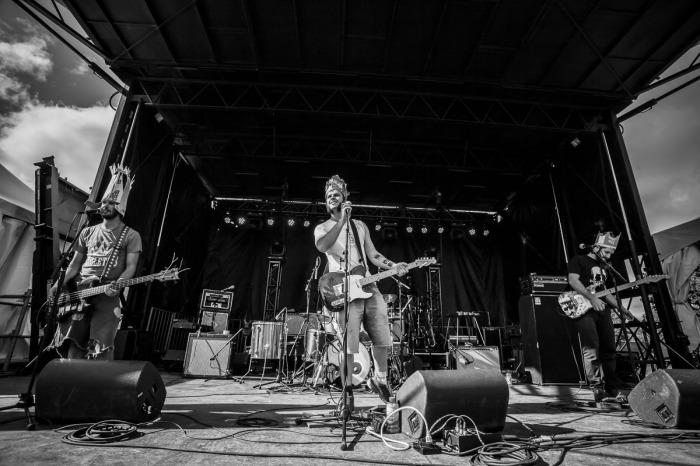 There are treats, there are triumphs, and there is undiluted devilry, and in the case of Global Citizen there are irrepressible riots of combining all three. The album comes from Canadian rockers The Cardboard Crowns, a band creating a mischievous maelstrom of adventure from the raw tenacity of punk, the majestic swagger of ska, and the sultry charm of reggae, not forgetting a very healthy dose of pop. Formed in 2009, the band has been a relative secret outside of their home borders but it is easy with a little bit of luck to see that changing thanks to the thrilling stomp of Global Citizen.

Hailing from Aylmer, Quebec and now Ottawa based, The Cardboard Crowns’ seeds begin in high school with Joel “Rat” Kuehn (vocals/guitar), David “Tokyo” Speirs (drums), and Matthew “Googles” Megannety (lead guitar), the first two already strong friends before meeting the third in that place of learning. They formed a trio of garage bands, The Madd Fizz, The Fog Pilots, and The Rocket-Propelled Space-Fish along the way of their musical journey, potent steps which have laid the seeds for what they offer today. It was with the link-up with bassist Franks “Mystery Skunk” Cuningham around five years ago though that the spark for Cardboard Crowns was ignited, and from that point it has been full steam ahead for the band and its insatiable revelry.

It does not take long to realise the eclectic and inventive expanse of sound and imagination which fuels the album, the first three songs enough to reveal the wonderfully unpredictable and infectious variety at play. Opener Pulling Teeth sets things off, its opening and immediately engaging acoustic caress and alluring vocals folk like with a summery breeze to their relaxed temptation. It is just the gentle coaxing to bigger and bolder things though, energy building towards a rampant stride of punchy rhythms and tangy grooves driven by equally tenacious vocals from Kuehn and band. The song reminds of British band Knots, its emerging instinctive and anthemic stomp inescapable flirtation for feet and passions. The track is exceptional, fiery blazes of raw guitar only adding to the drama and power of the brilliant encounter.

Its might is soon backed up as the album’s title track and the following Hats Off unveil their distinctive and diverse designs. The first of the two strolls in on a smiling stride of reggae seeded 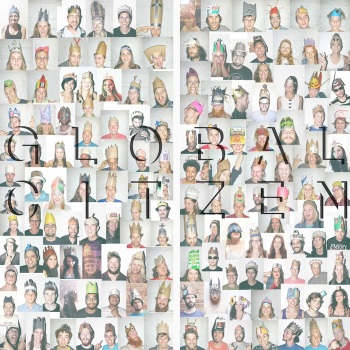 riffs and a rhythmic swing which soon has body and imagination swaying in unison. There is a just as vibrant pop punk enterprise to the song, bands like Smashmouth and Reel Big Fish coming to mind as it swerves and entices with vivacious melodies and bubbly chords, though the track ultimately evolves a unique identity. It’s smiling gait and devilry is matched by its successor, ska bred stabs igniting ears within seconds as a punkish air sets in motion another contagious persuasion. The song though not flawless, the band shouts not working for personal tastes, manages to smoulder and bounce simultaneously, like an exotic temptress with seductive curves and voracious appetite.

Sun And The Stars winds around ears next; its tone equipped with a country twang aligned to smoky keys and Southern kissed sonic flaming. Again sound and vocals provides a seriously catchy and excitable devilry and even though it lacks the final persuasive spark which ignited its predecessors, the track leaves appetite hungrier and satisfaction fuller. It is a level of pleasure straight away thrust to new levels by the outstanding Shut My Mouth, another incendiary romp of piercing hooks and devilish enterprise allowing pop punk and ska to collude in a virulently infectious rascality which might even have the power to bring the feet of the lifeless to dance.

The thrilling adventures and diversity just keeps coming as Olé brings its Latin ska tempting to tease and excite ears and imagination. The cosmopolitan shuffle is a festival of swarthy rhythms and rosy faced melodies, a lively footed canter merging the rebellious charm of Mano Negra with the seductive zeal of Les Négresses Vertes. At the song’s end its gentle hug allows a breather to be taken before the rugged brilliance of Your Son has body and emotions leaping again. Adding new causticity to vocals and chords, the track switches its roars and croons for the album’s most ferociously captivating offering. Pop and punk collide, virtually brawling throughout as they breed some of the sharpest appetising hooks and rhythmic provocation you are likely to devour this year.

The release is brought to an end by firstly the seriously magnetic Bounty On His Head, a part punk and part folk romp, and lastly through the carnival-esque tempting of Generations. The final song is a mix of gypsy punk and folk vaudeville, like a mix of Tankus The Henge and Flogging Molly, and a sensational end to one scintillating tapestry of sound and invention.

It is hard to imagine The Cardboard Crowns remaining a relatively unknown proposition once Global Citizen works its alchemy around the world. The album offering music just as it should be; imaginative, passionate, and pure fun.