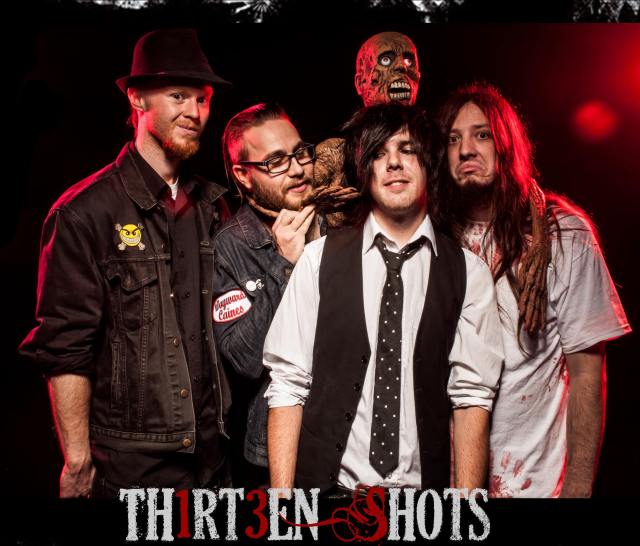 Ever since the release of the single Danzig in 2011, UK rockers Thirteen Shots have been evolving a sound which seemingly chooses its own direction through each release. It is an organic journey which constantly surprises fans and at times maybe even the band itself. The predecessor to the band’s new EP hinted at one potent and striking shift which the White Noise EP now confirms whilst also suggesting more and that it too is just a sign post towards a yet to be reached destination. Early tracks and debut album Vaudeville offered rock ‘n’ roll with a voracious psychobilly/ punk ‘n’ roll devilment but the unleashing of last year’s Tales That Start With A Whisper seven-track brawl explored rich strains of horror and garage punk in its varied adventures. Now White Noise has stepped forward to push those essences further, the result a diversely flavoured slab of rock which is as at ease employing blues and classic rock as it is garage punk and rock, the result a mouth-watering blaze of raw and dirty rock ‘n roll.

Formed in 2011, the Johnny Rose led Thirteen Shots was swiftly firing up attention, especially after the release of the acclaimed Danzig which was backed up by a live presence which had also garnered equally potent recognition, the band sharing stages with bands such as Demented are Go, The Peacocks, Rezurex, Howling Wolfmen, Graveyard Johnnys and many more these past few years. Their following releases only reinforced their emerging presence whilst relishing the movement in the band’s sound, a journey continued with captivating ferocity through White Noise. The beginnings of the Birmingham quartet when Rose linked up with co-founder guitarist Joe Public, saw the pair move away from a hard rock breeding but with the new release it almost feels as if Rose is drawing on the best essences of that earlier time and flavour to add another flame and spice to the next twist in the ascent of Thirteen Shots.

The new release also sees the introduction of drummer Tom Fenn, who replaced the departing and also band original Chelsea McCammon, and opens with the imposing turbulence and attitude 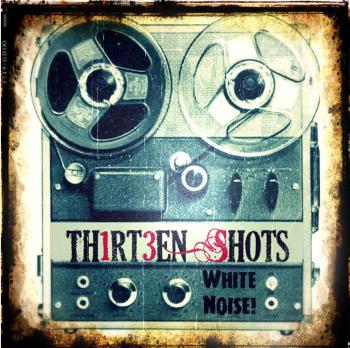 of Doom. From its first breath, intense and corrosive riffs graze the senses whilst a bulky bassline joins crisp rhythmic punches in accosting ears. It is a formidable wall of sound, almost Sabbath-esque in tone and predation as fiery grooves wind around the distinctive tones of vocalist Rose. Lyrically the band is still spinning great tales from b-movie and horror inspirations but in sound the track instantly reveals a fiercer and more intimidating air, though it is just one aspect in the varied character of the release.

Next up is the first of two recorded tracks taken from last encounter Tales That Start With A Whisper, and in some ways reveals the most about the shift in sound as you compare versions. Nekrosexual whips up an immediate rich garage blues fuelling to the southern kissed garage punk encounter. There is admittedly not a major change in the song’s textures and sonic winery but everything has a new flood of intensity and incendiary colour to it, a rawer rock ‘n’ roll clarity which just gets the juices dribbling.

The following Blue Lagoon features Silpha, the vocalist from German horror punks Silpha & The Corpseboners and label mates on Rose’s own label Undead artists. The track roars from its first second, a bracing horror punk causticity scarring the air around the expressive and magnetic tones of Rose and Silpha. The track is a contagious stomp, the guitar of Lewis Manchip an uncompromising squall and the pulsating throaty bass lures uncaged by George Chick inescapable bait as they collude with the wicked swings of Fenn. The track is punk rock at its finest at its core and a lingering treat even after making way Psycho Jukebox, the other song re-recorded from the EP’s predecessor. A firm favourite of ours from Tales That Start With A Whisper, the new version is a little less convincing yet with its new roar and bluster turning the swagger loaded rocker into a ferociously compelling provocation, the track only adds bruising drama and incendiary enterprise to the release.

Inspired by the romance of the silent film star and film icon Mary Pickford, First American Sweetheart is the EP’s pinnacle, its infectious gait and rockabilly temptation wrapped in hard rock grooves and garage punk contagion. The song is outstanding; another in a line of underground classics sculpted by the band and the deserving of a wider spotlight. It plays with a Turbonegro and The Damned meets Rezurex type stomp and alone does enough to confirm that the new generation of their sound’s evolution is a step in the right and thrilling direction for the band.

Final song Padded Cell Blues is exactly as it says on the tin, a feisty blues drenched slice of deranged rock ‘n’ roll which shuffles and rampages across its sultry confinement with captivating tenacity and invention. Adding another open colour to the canvas of the EP, the song is a thickly satisfying close to another fascinating and exciting release from Thirteen Shots. Playing as a taster of the band’s continuing journey and an anticipation triggering teaser to a new album out next year, White Noise is a treat for all Thirteen Shots’ fans but also a rigorously enticing invitation for all appetites of unpolished, unclean, and masterfully invigorating rock ‘n’ roll.

The White Noise EP is available now via Undead Artists digitally and as a limited CD @ http://thirteenshots.bandcamp.com/album/white-noise