Home › Music › The Slow Readers Club – Forever In Your Debt

The Slow Readers Club – Forever In Your Debt

With two imagination and emotion gripping singles already thrilling 2014 and being inspired by the fevered success of the last Don’t Mind, UK indie/electro rock band The Slow Readers Club keep the persuasion intensive with the re-release of fan favourite Forever In Your Debt. It is a darkly evocative and relentlessly tempting proposition, cinematic in its air and engrossingly flirtatious in its drama, and alongside live album Live at Central Library also released this week, superbly reinforces the potent emergence and rise of the band. 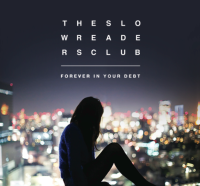 fresh and seductive as the bubbling notes of the guitar which join the dark persuasion. Firm beats frame it all whilst provocatively visual keys colour the immersive atmosphere before providing a broader texture and emotive depth to their drama. For all its almost sinister seduction, the song is also sublimely catchy and energetic which ensures that the body is as engaged as thoughts and emotions.

The Slow Readers Club are showing themselves to be masters at creating songs thick with emotional shadows and reflective depths but also as contagious and addictive as a first kiss, the proof is right here with Forever In Your Debt and it’s also masterful accompanying track Days Like This Will Break Your Heart.

The Slow Readers Club with songs like this make it so easy to declare them one of the great breakthroughs of 2014 and you sense we have till only scratched their surface.

Forever In Your Debt is available now digitally at most stores and on vinyl @ http://theslowreadersclub.bandcamp.com/album/forever-in-your-debt