Forged In Black – The Exodus 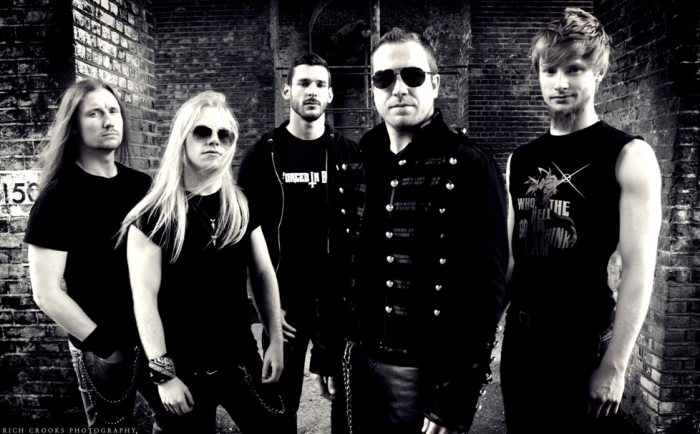 Though UK heavy metallers Forged In Black is far from being a new band, they have found a new shift and exploration in their sound and thoughts which has led to a relatively recent name change, a renaming which reflects line-up changes and this progression in sound. Their new encounter is The Exodus EP, a release consisting of one brand new track and a couple of early demos of older songs. It is sure to be a tonic for all fans of adventurous classic metal, imposing riffs, and flesh scoring vocals, whilst for the rest it still has enough to stir attention.

The band began in 2009 under the name Merciless Fail, emerging with the intent to merge traditional heavy metal with a unique contemporary essence. The band swiftly earned a strong reputation for their live performances, playing both Bloodstock Festival and the main stage at Red Roar Festival in 2012 and going on to win Metal to the Masses and Band Quest competitions. 2013 was the band’s most successful to date, playing Metal Gods Festival 2013 alongside the likes of Beholder and Savage Messiah, supporting Skreamer and again Beholder, and re- releasing acclaimed debut album Forged in Black. As the following and similarly well-received The Tide EP, the album came out last year for its second outing, two years after the first appearance and under the new band name. It was the four-track EP which showed a suggestion of a twist in the band’s sound, something far more pronounced and exploratory now with the Romesh Dodangoda (Motorhead, Sylosis, Bullet For My Valentine) recorded The Exodus.

The opening melody of the title track is simple bewitchment, a potent lure reinforced by the emerging stride of imposing rhythms and climatic swipes of guitar. There is a definite thrash breath

to the track once fully in view, an early Metallica essence to ignite imagination and appetite. It is swiftly infused with heavily toned riffs and the rich vocals of Chris Storozynski, his classic style standing eye to eye with the rugged elements of the track but matching the acidic sonic flames around him. A great bruising vocal backing from bassist Kieron Rochester badgers the fiery tones of Storozynski as they lie on the skilled weave set by guitarists Tim Chandler and Andy Songhurst. The track ebbs and flows with its driving torrents and dramatic crescendos, providing a fascinating encounter offering something for thrash, classic, and heavy metal fans and as suggested previously enough for even those not as enamoured in the genres to find intrigue in.

A 2013 demo of Accusations Of The Innocent is next, the original track having previously featured on album and last EP. Once again a thrash invention helps open up ears and focus before the track spreads into more classical metal scenery wrapped with a creative web of guitars and spicily delivered vocals. Again there is plenty to get your teeth into even if the track feels a little reined in compared to its predecessor. With a cauldron of impressing guitar craft and invention courted by the excellent punching rhythms of Joshua Moreton, the song before it makes way for the 2011 demo of the song Forged In Black, shows exactly why the band has inspired such a potent fan base and reputation. Its successor instantly reveals the rich seeds and bait which has been persistent within the band from their start. Comparisons to the likes of Judas Priest, Iron Maiden, and Black Sabbath come with the mention of the band’s name and it is easy to see why with the closing song. Muscular and sonically sultry, it has feet and neck muscles pumped whilst the operatic calls of Storozynski finds a welcome home in the rich melodies veining the incitement.

The Exodus is a release to put a smile on all heavy metal fans but as shown especially by its lead song, it also has the potential to awaken strong appetites in those less taken with its core breeding, a potency shown by it persuading our less than enthused tastes for classic metal and its vocal styling.

The Exodus is available through all stores from December 1st.