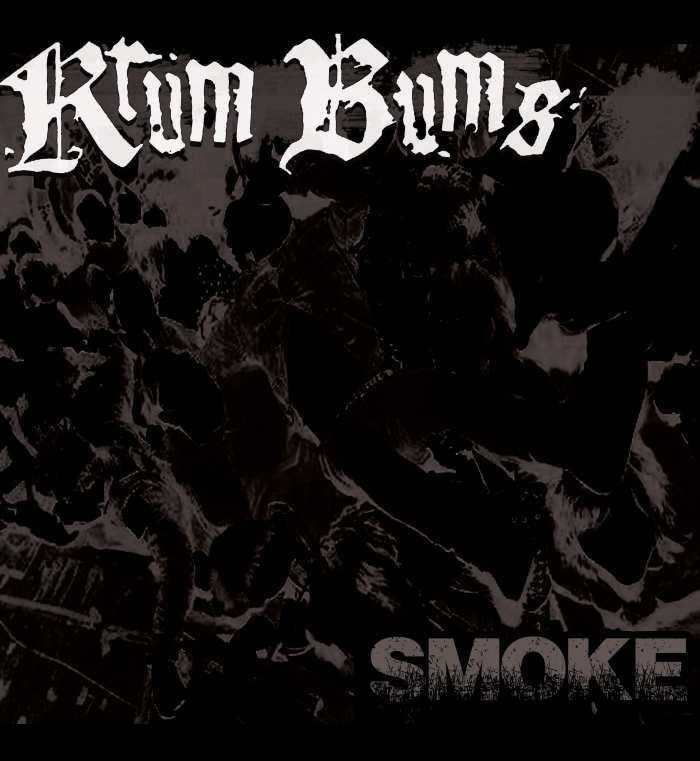 Angry, antagonistic, and some of the best punk rock you will have heard this year, the Smoke EP from Krum Bums celebrates Record Store Day/ Black Friday in sublimely belligerent style. Made up of four rages jammed packed with essential hooks and unique antagonism, EP and band brawl and roar with insatiable passion and intensity. Quite simply street punk has never sounded better.

Hailing from Austin, Texas, Krum Bums was formed in 2000 by vocalist Dave Tejas and guitarist Trae Martinez. The years has seen numerous line-up changes but equally a continuing evolution and impressive growth of sound, a charge coming to a peak with previous and fourth album Cut The Noose in 2011.The band now though has unleashed their finest ferocity yet with Smoke, incendiary punk at its virulent best.

The EPs title track sets the rampage off, riffs and raw chords from guitarists Martinez and Josh Stiffs exploding on the senses alongside the staggered rallies of beats from drummer Nika Bennet. It is an imposing and attention grabbing start, but just a teaser as the track swings into fierce action with a riveting groove and heavy throated bass tempting from Zach Volta. It is the distinctive and gripping scaly vocal tones of Tejas which completes and seals the deal, his coarse persuasion complimented perfectly by the backing calls of the band. Grooves proceed to wind around ears and imagination with addictive potency whilst the sheer tenacity and energy of the song is a blaze which withers the senses and ignites the passions.

The stunning start is swiftly emulated by Nightmares, its sonic lure the first touch to the subsequent furnace of lyrical and vocal spite within a sonic web of searing enterprise and merciless rhythms. Again hooks provide inescapable bait whilst the heavy swings of Bennett only stir up the body with dangerous anthemic tempting. Added to the rasping might of Tejas and predatory tones of the bass, it all colludes to harass and bruise thoughts and senses into willing submission.

The broader melodic hard rock scenery of Falling Down whips up a frenzy in release and listener next, the song a punk anthem demanding the assistance of its victim but also unafraid to flirt with flavoursome rock and horror punk essences. Actually the ‘weakest ‘of the four songs but outstanding aggressive drama and contagion all the same, it makes way for the closing might of Plastic Bomb, arguably the strongest track on Smoke. To be honest there is little between all of the protagonists but with tangy grooves, a tsunami of beats, and ravenous urgency, the track just has the edge. A raging furnace of enterprise and stalking predation within a torrential outpouring, the encounter is sheer slavery of ears and emotions.

We have constantly suggested that punk rock is having a new heyday right now, and with releases like this from bands like Krum Bums, who only get better and more essential with every maturing year, there is no chance of doubting our claim.

The Smoke EP is available via Jailhouse Records from November 28th on 12“coloured vinyl limited to 500 copies and digitally @ http://jailhouserecords3.bandcamp.com/album/krum-bums-smoke-12-e-p with a re-release with different packaging and artwork due in 2015.