Auxes – Boys In My Head

Storming the psyche like a deranged bluster forged from the sonic invention of The Pixies and Melvins bound in the raw devilment of The Fat Dukes Of Fuck and the acidic charm of The Mai Shi, Boys In My Head is contagion gone wild. The new album from Germany based noise punks Auxes is a masterfully devious roar combining addiction with primal seduction for without any doubt one of the year’s most essential propositions.

The successor to their previously acclaimed More! More! More! of 2012, Boys In My Head sees the band take some of its raw punk persuasion and fuse it to a broader noise and psyche rock exploration. The result is their most compelling and spicily intrusive incitement yet, which as well as those earlier comparisons also sows essences found in band such as At The Drive In, The Birthday Party, and The Locust. Consisting of the combined experiences and adventure of Dave Laney (the co-founder of Milemarker and Challenger), Florian Brandel (Eniac, Kommando Sonne-nmilch, Airpeople) and Manuel Wirtz (Eniac, Honigbomber, Die Charts), Auxes fire up ears and emotions with swift drama and success as Boys In My Head entangles ears with opener To All The Fires. Song and release provide an infestation which is as fascinating as it is unpredictable, as anthemically warped as it is sonically scorching, and from their first notes inescapable slavery.

To All The Fires immediately encases ears in a web of weighty beats and sonic intrigue, a coaxing soon flourishing with feistily flavoursome melodic enterprise fuelling enslaving grooves and hooks. Vocals too have an alluring expression which subsequent harmonies only enhance as the song continues to flirt and dance with the imagination. The impressive start is straight away surpassed by I Can’t Stand You Any Longer, the song from its initial feisty rub of riffery and jabbing rhythms, a voracious stomp of virulently gripping hooks and tangy melodic intrigue. There is a grunge spice to certain aspects of the track but primarily it is a merger of garage and noise rock devilry sparking thoughts of Fake Shark-Real Zombie!

The following I Wanna See Results riles up the passions with its brief but ravenous temptation, a gnarly bassline relentlessly courting acidic guitar endeavour whilst increasingly impressing vocal causticity and just as hungrily agitated rhythms unleash their narratives. Far too brief but irrepressibly thrilling, the encounter makes way for the album’s title track, itself an epidemic of rhythmic bait and resourceful hooks within a sonic haze. Seemingly strongly inspired by The Pixies, the song is a delicious weave of sonic slavery, every groove and tangy chord easy thraldom of thoughts and passions.

The pair of Dog & Master and Life In Their Television increases the album’s grip, the first opening with a predatory rub of riffs and similarly commanding rhythms before striding purposefully with creative rabidity and bewitching enterprise. The track is a scintillating hex on body and emotions whilst its successor is an instant tease with its percussive coaxing and 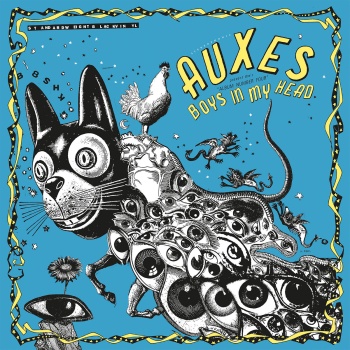 mischievous beats. It is revelry though which cannot resist bursting into a punk fired tempest of abrasing guitar invention and vocal confrontation, all around a throaty bass spine. The track is a fiery charge soaked in punk belligerence, it again igniting fresh hunger in the appetite for the outstanding release; a greed right away fed wholesomely by the Frank Black spiced Boom Boom Town. Harmonies and melodies thrive in the sonic tapestry around them, drawing on an acidic wine of sound to brew their equally captivating toxicity.

Every song brings a fresh peak to Boys In My Head, though maybe none as insatiably as Under Fire. Its primal seduction of bass and drums is the foreplay to an orgasmic devilment of barbed hooks and intoxicating grooves, a dramatic infection where there is no second where feet are relaxed and emotions silent, though that to be fair applies to most tracks, especially the relatively calmer but no less transfixing Hand In Hand With The Man and the sultry rock ‘n’ roller Dead Dead Eyes. The first of the two sways and flames with siren-esque sonic candy which brings hints of eighties bands like The Fire Engines and Scars. The second of the pair again has that breeze of nostalgia, offering whispers of the Scottish bands as just mentioned and the likes of Josef K but infusing it into a punk bred slice of ferocious rock with infectious vocals and chorus eventually aligned to anthemic chants.

The album closes with the darkly shadowed I’ve Had Enough, a post punk coloured antagonism engaging ears with a noise and punk rock provocation, and another which is as much an epidemic of tempting as it is a blast of creative turbulence. The song is a brilliant end to quite simply one of the year’s biggest triumphs. There have been a few essential encounters in 2014 and Boys In My Head easily joins the list; in fact it might just be the one heading the queue.

Boys In My Head is available now via Gunner Records, digitally and as CD, vinyl, and cassette versions @ http://auxes.bandcamp.com/album/boys-in-my-head