With the departure of vocalist/guitarist Adam Norden following its recording, Prolapse from American Heritage might be the last thing heard from the Chicago band, but if this is so what a way to go out. It is a beast of a proposition, a tsunami of controlling grooves, belligerently aggressive rhythms, and a primal force of voice and breath. It is bullying mass of provocation and passion, a lingering statement from what will be a sorely missed band if there is to be no more.

Consisting of six new tracks and three covers brought in the fusion of thick sludge metal, imagination binding mathcore, and abrasing noise rock/hardcore ferocity the quartet is renowned for, the successor to acclaimed 2011 album Sedentary, uncages a caustic savaging which rivals anything they have unleashed before. Recorded with Sanford Parker and released through Solar Flare Records, sixth album Prolapse quite simply brings the band’s presence since 1996 to an incendiary and exhilarating end.

From the first sonic blast of opener Eastward Cast the Entrails, band and album has ears and attention severely grasped, the punishing initial touch leading into a bruising maelstrom of ferocious rhythms, corrosive riffs, and brawling vocals. Within the tempest though grooves raucously flirt and technical prowess seduces, the track increasingly expanding and flourishing in the imagination and emotions. Equally as it grows contagiousness coats the tenacity and enterprise of the guitars and rhythmic antagonism, the provocation becoming as seductive as it is hostile ensuring an insatiable and explosive start to the album swiftly matched by its successor.

Anxious Bedwetter roars and assaults with the entwined charm of Corrosion of Conformity, Mastodon, and Agnostic Front, it swiftly buffeting and igniting emotions with a torrential 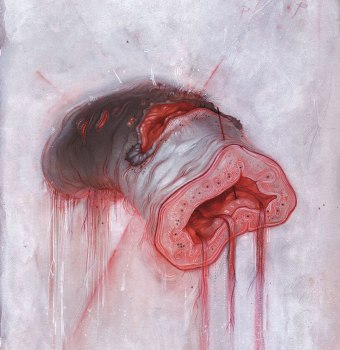 onslaught of raw riffery and rhythmic violence cast by drummer Mike Duffy. Again though there is a virulent temptation from scorching melodies and spicy grooves at work, all as uncompromising as the heart of the encounter but spreading irresistible magnetic toxicity. Vocally Norden leaves no syllable and emotion untainted by venom and anger whilst his and fellow guitarist Scott Shellhamer’s sonic temptation is simply bracing.

The pair of Obliviocrity and Constant and Consuming Fear of Death and Dying make no compromises on the senses, the first from another debilitating sonic squall and with nostrils flared, rampaging through ears on a breath-taking sonic turbulence and rhythmic inhospitality. To the destructiveness though again grooves are enflamed with a melodically brewed acidity and creative spice which invigorates and sears the senses. Its quick hellacious ravishment is contrasted by the prowling presence of the second of the pair. Reaped from the predatory essences of doom and sludge, the song crawls provocatively over the listener, imposing and oppressing in its air whilst exploring a brighter terrain of engaging melodies and radiant invention. There is still a menace to its raw beauty though, the band finding the same kind of dark allurement which has blessed the music of Killing Joke over the decades, bassist Erik Bocek, a constant primal enticement across the whole release, bringing forceful heavy seduction to the body of the song.

The hardcore severity always lurking within American Heritage is given full rein in the outstanding Mask of Lies next, the track a furnace of spite and rage with flesh flailing rhythms and riffery to match. It is a savaging you can only embrace and invite back time and time again, much as the next up Blackbird, it a hellacious forging of hardcore, punk, and noise rock rancor with psyche twisting invention. The track is a glorious predator and the pinnacle of the album, a relentless creative scourge which just has you drooling for more and ears and emotions exhausted.

The departure of the triumph is the start of the trio of covers on the album, starting with the outstanding take of the Descendents track Hürtin’ Crüe. It is an erosive swamp of sonic and vocal intensity, a merciless blaze with the charm of a public flogging and quite irresistible. It is followed by the Black Flag track Thirsty and Miserable, American Heritage treating it to their own kind of barbarous enterprise and stormily inventive bad blood before moving on to Bulletproof Cupid, the Girls Against Boys encounter. Openly salacious from its first vocal caress and fiercely imposing as soon as its first note preys on ears, the song is a delicious sinister seduction and dare one say even more potent than the original.

The track brings another unmissable offering from American Heritage to a fine close. What will be missed is the band’s presence, that realisation reinforced by Prolapse as it scars the senses whilst sparking a big tinge of sadness. Things move on and you just feel further raw adventures will be ahead in some guise from the members of the band, something very easy to breed an excited anticipation for, especially after this grand finale.

Prolapse is available now digitally and as CD and vinyl versions via Solar Flare Records @ http://music.solarflarerds.com/album/prolapse or http://americanheritage.bandcamp.com