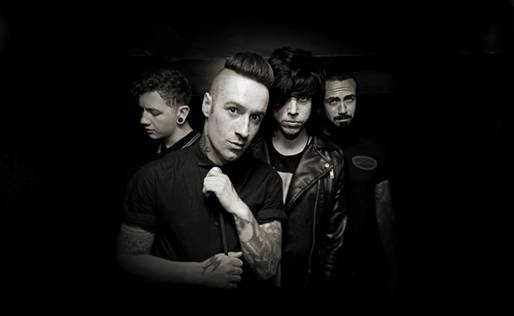 Crawling the senses and imagination with mausoleum bred romance and a sound as carnal as it is predatory, UK garage punk/psyche rockers Dedwardians unleash new AA-sided single Love Sick/ Like An Animal, an encounter unleashing the beast in the passions. The release is a raw and primal proposition, a caustically bracing protagonist providing modern rock ‘n’ roll with an older devious seduction.

The new encounter follows last years acclaimed single Bang Bang Die/Stop Destroy, an attention grabbing release igniting a feverish following which Love Sick/ Like An Animal will only inflame further. The London based Dedwardians expand their songs from a fifties rock ‘n’ roll inspired core, drawing in the darkest essences and warped delights of psychobilly, garage punk, psyche rock and more. The best way to describe their sound is the ravenous punk of The Cramps colluding with the fuzzabilly devilment of Eighteen Nightmares at the Lux to engage in illicit unions with the psyche dementia of The Dropper’s Neck and the gothic rockabilly charm of The Orson Family. It is a concoction which as mentioned made a gripping infestation for the first shadow cloaked swoop of the band and rises to even greater infernal irreverence and beauty with the new single.

Love Sick opens with an instantly addictive and tangy groove, the fiery enticing from guitarist Gaff almost insidious in its lure and reminding of Damn Vandals in tone and inescapable temptation. Jabbing beats from Dan Bridle skirt the

The accompanying Like An Animal is no different, an organically lo-fi persuasion with its own unique and epidemically driven infestation of sound and hungry passion. The track simmers with a sonic coaxing initially before again grooves lay the first tasty bait, it all subsequently joined by a persistent and intimidating shuffle of drums and harsh scythes of guitar. The track is a riveting tempest, hooks and splices of melodic acidity spearing the tempestuous prowl of the song whilst Gautrey like a barker from the darkest depths, leads and directs the incitement with his expressive tones, backed by the rest of the band in rockabilly style. The track as its companion is pure temptation, from the bulging basslines to the hoarse vocal and sonic squalls, as well as the scorching melodic expulsions of inventive manna, simply irresistible.

The track having reinforced those references in sound mentioned before, also holds a potent breath of The Eighties Matchbox B-Line Disaster, and in many ways is probably the closest comparison to Dedwardians. For all like us who still mourn the end of that great band, we have a new contender to fill that gaping gap in British music. Do not be deceived though, Dedwardians is and has a sound unique to themselves and with the release of the new single will surely turn the ripe buzz around them into a full blaze of attention and ardour, especially as you are not likely to have heard many singles matching its brilliance let alone surpassing it this year.