It has been a long timing coming, well it feels that way since the release of their acclaimed and outstanding EP Bury The Ones We Love in 2012, but now UK melodic metallers Soldierfield return with their highly anticipated debut album, Catharsis. It is a release which like so many others we had high expectations of and fierce hunger for, and it is fair to say that the tempestuous rampage suffices all wants and much more. Simultaneously continuing where the previous release left off and forging new expansive landscapes for their songwriting and feverishly flavoured sound, the quintet has created an incendiary device of enterprise and raw force to set the British metal scene ablaze.

Soldierfield was formed in late 2011 when guitarist Andy Trott linked up with bassist Simon Priestland to work on and unleash songs the former had been working on. Deciding to put out some demos the pair pulled in vocalist Leigh Oates (Order Of Voices, Rise To Addiction) who expelled his lyrical and vocal prowess upon the tracks. The first song unveiled instantly sparked a buzz in the underground scene and within the industry which led to the band signing up with Metalbox Recordings. Subsequently the Bury The Ones We Love EP was uncaged with the line-up completed by guitarist Steve Wray (Rise To Addiction, BLAZE), who produced the EP and now the album, and drummer Jeff Singer (Paradise Lost, Kill II This, China Beach, BLAZE). Continuing to reap the richest essences of numerous styles and flavours to infuse into their own invention, Soldierfield, with Wayne Banks (Joe Lynn Turner, Sabbat, BLAZE, Messiah’s Kiss) now on bass, raise their and British metal’s bar again with the impatiently waited for Catharsis.

The album is an aural emprise which immediately ignites a fire in ears and emotions, but proceeds to unveil more depths and potency over time to perpetually seduce the imagination. From their first offering, The Light, band and album enthrals and trespasses through ears into the passions with virulent and creative ferocity. Theirs is a sound which sounds deceptively familiar but equally wholly fresh and distinctive, no more so epitomised than the opening track. Seemingly entering from where final track The Path on the EP left off, The Light is a bridge between and gateway into a new chapter and realm of adventure. Its dawning presence is a restrained and melodic tempest which draws near with every sonic agitation before exploding into a predacious and rhythmically intensive stride. Riffs flame and flirt with their enticing whilst bass and drums provide an enslaving bait, it all capped by the outstanding sandy toned vocals of Oates. As potent and expressive as ever, straight away there seems a thicker impassioned drive to his tones which is matched by the carnivorous riffery and colourful designs cast by the guitars. As rampant as it is resourceful, the track is a stunning start which with moments of Manic Street Preachers like persuasion has the appetite drooling. 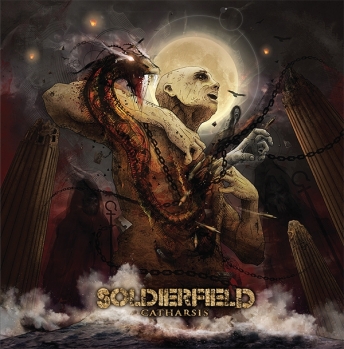 The following Beautiful Lie rigorously strides the same plateau, sonic intrigue seeping from every guitar spawned note as intimidation drives every swinging beat. There is an instant drama to the song which is ushered in through the throaty basslines of Banks and stretched by the vocal tenacity of Oates and the acidic invention sculpted superbly by Trott and Wray. As its predecessor, the song offers for no definable reason a familiar face but is soon twisting its character and presence with riveting craft to leave ears and thoughts engrossed before both The Only War and Burn Bright ignite their impressive persuasions. The first of the two opens with melodic elegance and beauty across a peaceful atmosphere, the guitars painting an enthralling picture before the more rugged landscape of the song is revealed and painted by the impassioned vocals of Oates. Flirting with thrash and groove metal, the song is soon aflame with gripping enterprise from the guitars and prowling rhythmic tempting from Banks and Singer, a mix emulated by its successor within a far more savage and inhospitable atmosphere. The track merges extremes of texture and attack with fluidity and thrilling resourcefulness, raging and seducing within a just as agitated and varied sonic climate.

The pair of Monochrome, an exceptional track which exploits a horde of fierce and inflammatory styles to create another major pinnacle on the album, and the bewitching Ghosts sublimely spark hungry waves of pleasure and satisfaction through ears and emotions. The first truly encapsulates the band’s invention, a tempestuous fusion of varied sounds and flavours which is as adept and majestic brawling with or seducing the listener, whilst the second is an unpredictably transfixing offering which needs more time than others to reveal all its qualities but emerges just as handsomely accepted and devoured. This can also be applied to the dramatic presence and evolving creative narrative of New Religion and the enchanting gentle croon of the album’s title track where Oates again reinforces his vocal prowess.

The next up Nothing Left springs with the same melody fuelled lure as the last song but is soon shrugging of restraints to emerge as a voracious and turbulently volatile storm which only feeds the greed surrounding the release, especially when it still shares its fury with moments of unbridled beauty. The ferocious treat is replaced by the album’s closing track, the mesmeric Cut the Ties, a song blending wiry and seductive melodies with sinister basslines and breath-taking vocals; the track a stunning finale to a superb album.

Catharsis confirms all the early thoughts and assumptions about the potential of Soldierfield and much more, with only the fact that some songs do not linger in memory and thoughts as potently as they should and deserve a slight puzzle. Nevertheless the album is still one of the year’s major highlights and company very hard to tear oneself away from.

Catharsis is available now digitally and on CD via Metalbox Recordings @ http://metalboxrecordings.com/shop/index.php?route=product/product&path=59&product_id=57