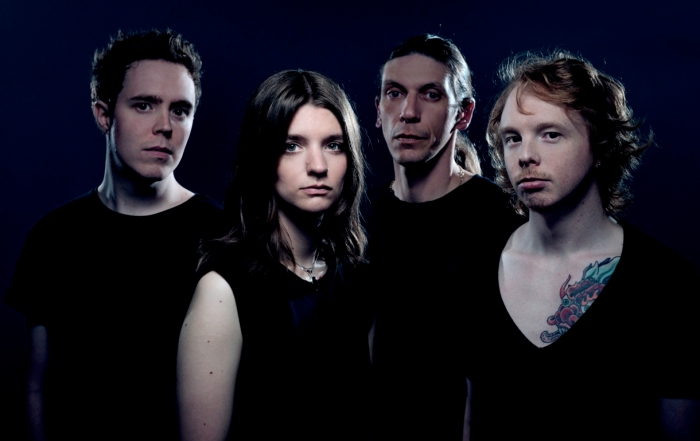 UK progressive rockers hAND unveils their third album Kintsugi this week, a mixed bag of an encounter but a captivating and pleasingly unpredictable proposition which ignites the imagination if not always the passions. It is an adventurous and diversely flavoured tapestry of creative imagination and inventive ideation which musically hits the spot more often than not.

At times compromising this creative emprise though are the vocals of bassist Kat Ward. The lady has a solid and potent presence vocally, but whether it is the production which makes her tones lie uneasy on the sounds or the style of delivery she rigidly sticks to, providing an almost Chino Moreno like ‘moan’ to her presentation, there is a dampening of the fiery energy ripe within the release . It works superbly at times but across the whole release lacks the spark to ignite ears and tracks. Variety and a regular snarl in that department is arguably the missing ingredient to fully round off what is a potential embraced encounter, the thought that maybe another voice to back up and share the frontline with Ward is a move to contemplate.

As we mentioned at the top though, Kintsugi is a compelling and intriguing proposal for ears and emotions which bubbles throughout with a cauldron of invigorating and riveting flavours. This our introduction to the 2004 formed band, we cannot say how hAND has evolved their sound from predecessor Breathing, but that release certainly drew well-received responses and there is no expectation of Kintsugi not doing the same. From the start the Sussex quartet has awoken increasing attention with early EPs Chapters and Shadow: Word Pain, debut album Deadroom Journal through to its 2011 successor, and the band’s live presence. The year of the last album also saw a line-up change which seemingly only increased the band’s impetus. Taking 2013 out from their live aspect, hAND set about writing their third full-length, recording it earlier this year with, as on their previous albums, producer Nick Hemmingway. What has emerged is an album which enthrals and grows in strength and creative expression with every listen but one with that tempering factor talked of earlier.

The album erupts in a mesh of transfixing sonic dazzling from the keys of Tom Johnstone as Level 1 sets things off. With firm beats spearing their lure and the guitar of Kieren Johnstone dancing as magnetically and imaginatively as the synths, it is a delicious start to song and album. Progressive rock with a healthy soaking of pop, the track continues to seduce as Ward’s vocals radiantly add to the tantalising textures enveloping the senses. Riffs and melodies almost prowl with revelry at times whilst bass and drums make a potent if understated frame upon which the song lays its flood of engrossing hues. Persistently lively and towards its conclusion finding a more aggressive urgency, the song is a feisty and appetite sparking beginning.

From its vivacious charge, the band explores an evocative landscape with Windlestraw. Its entrance is a chilled but mellow coaxing which lures the imagination before exploding with a tempest of predatory riffs and growling bass

antagonism. It is a fiery mixture which is reinforced by the flames of synth enterprise which also erupts. The storm is the start of an evolving and fluctuating climate pitching together provocative calm and furious sonic turbulence aligned to rhythmic hostility. Though it does not flow as smoothly as its predecessor, the track is a gripping drama of creative endeavour and imposing imagination which as the album, grows and persuades with greater strength through every partaking of its journey.

The forceful yet gentle caress of Anthem (Ode To The Giddy) comes next, bass and guitar casting a web of resourceful intrigue as keys and vocals colour the sparkling ingenuity with their own provocative wraps. Revealing more of the busy invention and open adventure within the bands songwriting and sound, it merges essences which reminds of bands such as Opeth and KingBathmat to firmly hold attention before making way for the outstanding Volcanic Panic. Raging and mischievously flirting from its first breath, the track is a growling hotbed of sonic unpredictability and spatial majesty, as home careering voraciously through ears as it is melodically flirting with the imagination.

The funky festivity of Nebula continues the new plateau of the album, its infectious devilry amidst melodic escapades providing a richly flavoured and thrilling shuffle of jazz, synth pop, and electro rock. A temptress for feet and emotions, the song lights up the album with ease before the emotive balladry of Amazing Burn and the sinister lures of Hide You offer their different persuasions. The first is a decent enough call for ears and thoughts but it is its successor which brings another peak to the release. Smouldering with every syllable and note, the song makes a restrained start which is soon parading tenacious scenery of sonic exploration and melodic flaming to engulf and engross ears on to the passions. Though not stealing away best track accolades from others, the track is the band’s most intense and inventive exploration providing more evidence of their potential.

Straight away the superb Through The Big Door, Up The Stairs And Out hits ears with its towering inventive and incendiary tapestry of progressive and sonic intrigue locked into mouth-watering drama and imaginative colour. This seriously challenges for top track, its spiralling wind of melodic temptation through a provocatively sculpted maze of energy and enterprise exceptional and mesmeric. The band at the top of the game it is a breath-taking close to the album though it is the highly pleasing jazz funk seeded instrumental Words To That Effect which actually has the last enjoyable say on the album.

For the flaws and concerns Kintsugi raises, it cannot be denied that it is a rather appetising and enjoyable release which is easy to keep coming back to. hAND has the promise and invention to make big musical statements ahead, though they might need to make a tweak or two.

Kintsugi is available digitally and on cd via Brutal Elite with an additional Gold Edition version also available.