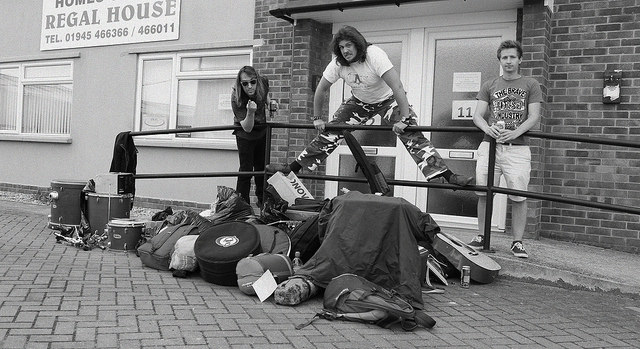 It is fair to say that Medusa’s last album Can’t Fucking Win kicked up a potential drenched storm which grabbed the attention of a great many. It was a potent and thrilling stomp with a fiery character and a middle finger raising attitude which pushed the London trio into a broader spotlight. Its successor Headcase’s Handbook is spawned from the same belligerent seeds but comes with a new richness of adventure, songwriting, and quite simply creative maturity. It is fuelled by punk fired rock ‘n’ roll and makes another pungent step in the ascent of the inventive tempest that is Medusa.

Formed in 2006 by vocalist/guitarist Julian Molinero, Medusa swiftly made an impression with their self-titled album which came out in a matter of weeks after the start of the band. It was an eighties inspired entrance which made a strong base from which the band’s sound and eventually second album Can’t Fucking Win was bred. Recorded with producer Romesh Dodangoda, Medusa’s 2011 sophomore album showed an evolution in all aspects of the band yet still held onto the striking raw and honest core which lit up its predecessor. That same breath of sound frequents Headcase’s Handbook but as before comes with another leap in depth and growth which is as open and forceful as it is mouth-wateringly enterprising. Recorded with producer Lee Batiuk (Deaf Havana) at Regal House Studio, Wisbech, Cambridgeshire, the album roars and flirts with salacious intent and imagination, the band unleashing a hungry and bracing dose of honest rock ‘n’ roll.

The RingMaster Review was honoured to be the band’s first port of call with the album within days of its completion, and we were instantly hooked and gripped by a broad smile as the release began its feisty persuasion with opener Sid and Nancy. A whine of guitar leads into choppy riffs and the expressive tones of Molinero, the combination an immediate lure which only flares with stronger persuasion when the track brings out its punk antagonism in voice and riffs. Instantly contagious and increasingly more so as the bass of Milo De Nack flirts with ears and the imposing beats of drummer Stefan Hale, the track is a raw and insatiable riot starting things off explosively, one with a poise and resourcefulness which right away highlights the band’s evolution between releases.

Things take another step up with Lip Service, a track bringing again that punk rock tenacity into a hard rock web of spicy guitar craft from Molinero, a weave completed with equally tangy riffs and hooks. This is courted by a just as

infectious rhythmic and vocal adventure, neither bursting their boundaries but both aspects bringing the heart of the track rich and catchy expression. It is an outstanding song continuing the impressive start to the album, a loft plateau which is not quite matched by either the following Absinthe Minded or Luxury Crisis. Both tracks though reveal further intriguing and inescapably appealing facets and twists to the character of album and sound for a lingering satisfaction. The first merges melodic country kissed rock with a blues flaming for a tantalising caress of provocative and imaginative endeavour complete with evocative washes of guitar and mandolin like vivacity. Though it lacks the spark of the first songs, it grips ears and appetite with ease much as its successor, a song with an inventive canvas of rolling and roaming rhythms picked at by a repetitive sonic plucking. This is coloured by the impassioned vocal delivery of Molinero and melodic enterprise extending from that riveting initial guitar temptation.

Lydia stomps in next, riffs and beats almost furious in their strength and voracity before relaxing into a more controlled but no less fiery stroll. Not for the first or last time there is a feel of Hagfish to the punkier edge and contagion of the song whilst the melodic enticing of the encounter has a classic lilt which comes with a whisper of Turbonegro in its texture. The track almost brawls with the senses leaving them greedy for more, a want fed by the different but just as flavoursome Call of the Abyss. Again predominantly punk and hard rock meet in a rigorous collision of catchy and unfussy rock ‘n’ roll, though there is plenty more spicing the song’s unpredictable and passionate presence as it tightly grips thoughts and emotions.

As masterful and compelling as the two tracks are they are overshadowed a little by The Sweetest Elixir and its thrilling temptation. Electronic toning wraps ears first before heavily striding beats and velvety basslines join the successful coaxing. Lording over this is the excellent vocal lure of Molinero, his smoother delivery drawing the listener swiftly in to the track’s narrative. As it weaves and swerves with bass and guitar imagination, the song swells in potency and invention, becoming the pinnacle of the album with its melodic emprise. It is a delicious song, as mentioned a major peak in the release, setting a touch challenge for the following track to try and rival, a test which Black Snow more than takes in its bordering on deranged stride. A maelstrom of disorientated rhythms and sonic bluster sets the persuasion in motion before it breaks free to establish a predatory and intimidating shadowed clad prowl. With vocals back on more crazed intent and the bass finding its throatiest intimidation yet, the track rages and roars with irresistible animosity and persuasion. It is a fury though which ingeniously explores more reserved and experimental tendencies too and an emotional veracity and ire, the result one more seriously impressing proposition.

The album closes with firstly the more restrained rock ‘n’ roll of Think It Over, a track not bursting with surprises but loaded with anthemic potency and finally the acoustic ballad Cherry Red. The song is a strong end to close out the album on a high, even if not one getting the blood boiling. There is little to dismiss it for though, and it ensures Headcase’s Handbook departs on a lingering touch.

Medusa gets better and bigger with every release, Headcase’s Handbook proof and easily their finest moment to date. It should be a break-through release for the band and if it just misses out on that success, whilst surely drawing a wealth of attention and acclaim its way, you can be sure the band will make that strike sooner rather than later.

Headcase’s Handbook is available now via Cyberpunk Records and @ http://medusaworld.bandcamp.com/album/headcases-handbook