Rancid – Honor Is All We Know 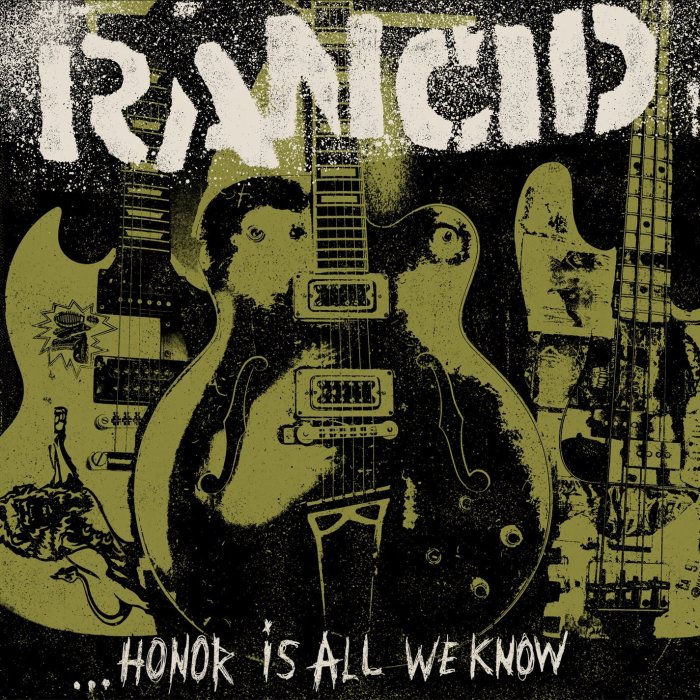 It is approaching six years since Rancid unleashed their last album Let The Dominoes Fall but the wait for another provocation individual to the band is now over with Honor Is All We Know. The California quartet has sculpted a presence truly unique within an intensive and expansive punk scene, and it is that sound and invention which again fuels the new release. A greatly satisfying and undemanding stomp, Honor Is All We Know is quite simply what Rancid does best; creating short stabs of contagious incitements which hit home lyrically and musically, punk and ska entwined in mini provocations.

Upon the fourteen track stomp, the band seems to revisit old times from across their years though they are certainly also mixing it with fresh attitude and energy. It is fair to say that surprises are low and familiarity high, resulting in a typical yet virulently addictive slab of sonic Rancid bred prosperity for ears and emotions. Expect some raising dissatisfaction at its almost ‘safe’ rioting in sound but fans will definitely and greedily lap it up whilst it is easy to see uninitiated pop punk fans making the leap into the bosom of one of modern punk’s founding fathers.

Released via Hellcat Records and produced by Bad Religion’s Brett Gurewitz, Honor Is All We Know instantly has feet and emotions alive with Back Where I Belong, a prize bull of Rancid incitement which roars and sonically squalls through ears. Guitarist/vocalist Tim Armstrong straight away stands tall and distinct in the infectious brawl whilst the bass lure of Matt Freeman pulsates with its similarly additive bait. Everything about the track is prime Rancid, the beats of Branden Steineckert insatiable whilst Lars Frederiksen also flares and sizzles on guitar and vocals, and whilst it feeds expectations there is nothing at play in the song to leave an already established appetite unfulfilled.

The following Raise Your Fist strolls in on a dark bassline whilst guitars layer caustic glazes of temptation. It soon settles into an imposing and unfussy stride, beats and vocals driving the raw punk tone and attitude of the track. Employing a healthy dose of oi to its again recognisable minimalistic landscape, the song also flirts with melodic scenery but it is just added colour to a rugged anthem which is matched by the fiery enticing of Collision Course. There is a feel of the band’s Let’s Go moment in time to the song linked to a Transplants spawned causticity, both uniting for another unavoidable anthemic persuasion which has body, voice, and hunger heavily involved.

Evil’s My Friend leaps in next with ska bent hips and riffs twisting and enticing respectively, keys just as flirty as guitars whilst the bass saunters and seduces with throaty temptation. The song is one inexhaustible bounce, its irrepressible energy and melodic irreverence pop/ska punk a contagious treat recalling the pinnacles of Armstrong’s solo album A Poet’s Life.

Both the title track and A Power Inside pound ears and imagination with raw riffing and pungent rhythms aligned to melodic and cantankerous enterprise. The first is a senses grazing slice of punk ‘n’ roll loaded with bruising antagonism whilst the second is a muscular yet easy going call to arms with infectiousness as insatiable as the plague. It also, around a delicious flaming of sonic endeavour, finds the band at its rawest and almost unruly in vocals and presence, lifting a good song to greater success before the aggravated intimidation of In The Streets snarls over ears      with its heavier rock intimidation. The track like many hits the spot without setting a blaze but still provides full enjoyment before the snarly dance of Face Up pushes up the ante again. With a sizzling melodic lilt to the guitar’s enterprise and thumping predation to rhythms courted by another binding bassline, the song has that familiar Rancid devilment and prowl which is maybe predictable but inescapable.

The raging hostility of Already Dead provides the next barracking, its spaghetti western climate over a ferocious canvas of antagonistic vocals and riled riffing speared by a devil spawned heavy bassline. The song is a riveting croon which does spread into new terrain for the band in some ways before the rhythm slinging, riff growling stomp of Diabolical grabs its moment in the spotlight. The track enslaves within seconds, never relinquishing its forceful devilry until the pop and sixties garage rock brew of Malfunction leaps upon the passions, it an irresistible hop of sound and energy with the flaming hues of keys as potent as the duelling vocals and cheek slapping beats of Steineckert.

The angry, busy barracking of Now We’re Through With You kicks up a bruising provocation next, its presence a senses tramping bitch slap of a treat whilst Everybody’s Sufferin’ slips into ska flirtation for a glorious two-tone shuffle which instantly makes subservient slaves of feet and emotions. Both tracks leave ears and appetite full but are surpassed by the closing triumph of Grave Digger, a quarrelling slice of street punk which has no excess to its lean confrontation but offers a fat anthemic lure which lingers as it brings the album to a mighty end.

It is hard to make claims that Honor Is All We Know is bringing anything truly new from the band and difficult to be convinced that it can convert those aware but not already enamoured with the band into their fold, but for a rigorously enjoyable assault of Rancid punk rock, it is another richly appetising scrap.

Honor Is All We Know is available from October 27th via Hellcat/Epitaph Records.