Canvas – No Love, No Hope, No Future 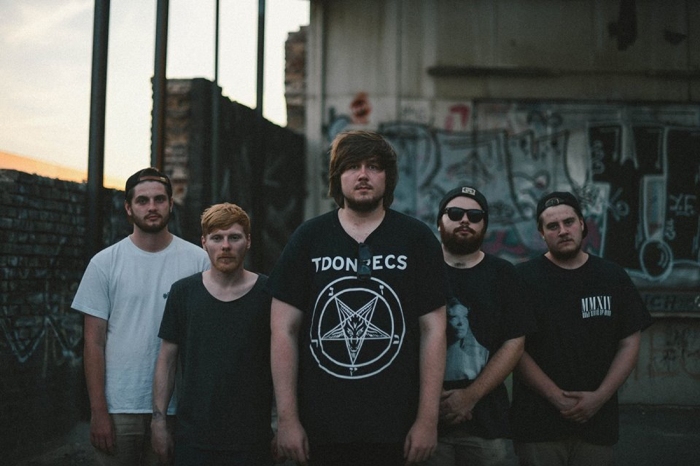 No Love, No Hope, No Future is a probing examination; an intensive exploration of sound, the listener, and maybe even more so of the band and emotions which created it. The debut release from British melodic hardcore/post-metallers Canvas, the album is a dramatic and seriously imposing proposition which given time and attention emerges as a rather startling and compelling encounter. In no way is it an easy listen physically and emotionally, but equally it is a rigorous captivation which reveals more depths as it flourishes in thoughts given time and space.

Self-penned as ‘music for misery’, the sound Canvas expels is bred in personal and emotional darkness which in turn sparks and brings out similar shadows in the listener. It is at times a demanding cause for reflection, and certainly across its length a mirror for recognisable issues for its recipients, though with a melancholic beauty and ravishing sonic enterprise it is not a provocation to worry The Samaritans. Vocalist Jack Rodgers said of the new album, “These songs are from a time in my life where I felt a bit lost, like a failure and a let-down,” going on to say “These songs were my catharsis, a way of getting all my thoughts and worries off of my mind and channelling myself into something productive. But, they are nevertheless some of the darkest songs we have ever written.”

Since forming in 2012, Canvas has been a hungry force live, touring and breeding a potent following across the UK and Europe. 2013 was especially busy for the band but they managed to find time to enter the studio with producer Ed

Sokolowski. It has taken a year to fully emerge, but that ‘break’ bred the sizeable proposition of No Love, No Hope, No Future, a recorded introduction to Canvas which definitely marks them out from the crowd.

Released via Transcend Music, the album floats in with the first touch of No Future, a song soon under the formidable vocal scowl of Rodgers and an anthemic rhythmic enticing from drummer Jon Vernon. It is a gripping entrance, drums and voice contrasts in attack and united in their potency as expressive flames of guitar from Dan Marsh and Chris Vernon clasp the senses. It is a raw dawn to the album but equally there is a distressed elegance and beauty smothering the sounds around Rodgers which tempers the abrasing emotions. The track flows straight into the following Live.Exist where riffs and grooves are there waiting to embrace and bind ears and imagination. The caustic tones of Rodgers lay in a transfixing tapestry of sonic imagination and rhythmic drama toned with dark hunger by bassist Ricky Clarke, whilst musically the song is a maelstrom of inventive endeavour and breath-taking sonic colour which persistently evolves and twists with ideas. The same applies to both Griever and Tired Eyes, two further big strides in the ascent of the album to grip thoughts and the passions. The first of the two bruises and seduces simultaneously, melodies and harmonies a mesmeric caress within the sonic and creative turbulence of the song and against the uncompromising vocals, whilst its successor prowls and rages rhythmically and sonically to sculpt a furnace of angst fuelled passion and erosive intensity again driven by Rodgers scarring delivery.

Both songs are glorious but highlight, certainly for personal tastes the only issue stopping the album being an unshakeable favourite. Rodgers is impressive and unrelenting with his corrosive tones and the almost bullying nature of his delivery. He brings the distraught and uncomfortable essences of emotions explored by lyrics and sound out perfectly, representing their strengths and weaknesses impressively with his predominantly pleasing style and intensity, but this also at times works against songs, the lack of real diversity to his attack a wearing factor over time and often a potent distraction to the striking imagination going on around him, as shown in the next up Nothing Left. With small yet maybe bold twists ahead hopefully it is something the band’s growth will address to fulfil the weight of potential which ripples vivaciously within the whole of the band and their songwriting.

From the provocative but ultimately underwhelming slow reflective raw croon of Nothing Left, because of what was just mentioned, the album grips senses and thoughts once again with the transfixing Respite, which emerges from the cold honesty of the previous song, and the unpredictable emotional ravaging of Tarot. The first of the pair is a brief and haunting but powerful instrumental which shines in the radiance of its sounds and skills of the band whilst the second is a charging onslaught of virulent intensity and vocal ferocity. With rhythmic nostrils flaring, riffs raging, and pain coursing through every syllable and engaging sonic intrusion, the track is a furnace of emotion and aural colour, and quite engrossing.

The album is brought to a close by firstly the mournful and savage drama of Eulogy, where voice and sound make a thick portrayal of lost hope and enslaving anguish. It is a commanding and demanding offering but scintillating in its inventiveness and the vocal fury from Rodgers and band, which here does stretch their boundaries for a thrilling result. The song alone has all that is needed to breed anticipation of major things for and from Canvas ahead. Its might is reinforced by the almost concussive weight and startling enterprise of Desperation. Within its smothering intensity though, the track ascends to a plateau of celestial beauty and melodic grace which is mesmeric and calming, though constantly pulled back to raging earth by the emotional turmoil exposed by Rodgers vocals.

Though the short and ok repetitive emotional ‘trap’ of Cold and Asleep actually provides the last incitement, Desperation provides the real masterful close to what is a fine debut, with only that more personal preference than actual issue, to rein it back from making an even more powerful statement. Canvas is a band with the armoury to build templates ahead, already they stand apart from most investigating similar landscapes of sound, and it is only early days.

No Love, No Hope, No Future is available now via Transcend Music @ http://transcendmusic.bigcartel.com/product/canvas-no-love-no-hope-no-future-cd

Like Loading...
‹ A Mouth Full Of Matches – Smoke Signals
Voodoo Sex Cult – A Year And A Day ›