Tigerpunch – Fight Of Your Life

Colliding metal voracity with the ferocity of heavy rock and then binding it with salacious grooves, UK rockers Tigerpunch show themselves to be an attention seeking and immensely satisfying proposition through their debut release. Made up of five slabs of rock ‘n’ roll afraid to stomp and fling their attributes around with mischievous abandon, the Fight Of Your Life EP is an instant enjoyment, though at first it is more a “nice, but…” encounter than a “wow” moment. Over time though as open craft and invention shines through the surface alongside lyrical devilment, the release emerges as a potent and addictive romp which may not be a classic but certainly is an encounter drawing attention back time and time again.

Wolverhampton’s Tigerpunch was brought to life by brothers Rich Reynolds (guitar/ vocals) and Jay Wolfwood (bass), its name grabbed from the movie Kung Fu Panda and inspirations from the likes of The Foo Fighters, Audioslave, Rage Against the Machine, and Nirvana. The line-up, after a search, was completed by drummer Russell Latham and swiftly the trio set about audiences to earn a rich reputation for their live performances, shows which has seen them play with I Am Giant amongst many. Fight Of Your Life is their first swipe at national attention and such the formidable revelry and fiery energy within it, the EP is a sure fire focus stealing introduction to the raucous treats of the band.

The release erupts into thunderous life with My Pet, Hate, and a wall of heavy handed beats and caustic riffs entwined with an immediately spicy groove. The vocals of Reynolds are just as swift with their entrance and devilish character, 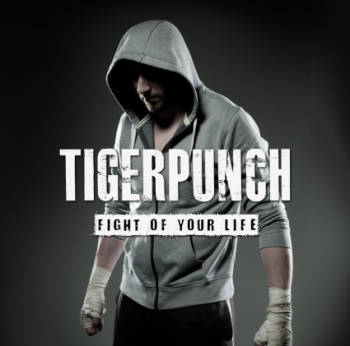 a mischief fuelled tone soaking every syllable as guitars flirt with ears behind them. The song proceeds to thrust its rhythmic hips and bruising tenacity through ears whilst grooves and a flavoursome solo add to the riveting colour of the song. Is it, much as the EP, offering anything dramatically original, no not really, but does it emerge as a contagious and rather irresistible rampage, you bet.

The following Blonde, as its predecessor, is bred from heavy metal and groove rock seeds, and is soon brushing ears with raw and vivacious flames of sonic enterprise and rhythmic confrontation. Riffs abrase and guitar endeavour sizzles throughout the song, whilst the drums beat a submission from the senses as everything becomes entwined in addictive and richly hued grooves. The track has little difficulty in capturing imagination and neck muscles before making way for the more intensive but no less infectious examination of I Am Alive. Whereas the first pair of songs shows their melodic and heavy metal breeding, the third track moves into a grungier area. Employing essences found in Alice In Chains and Gruntruck, the song prowls around ears with acidic colouring to its melodies and grooved temptation. It is another side to the sound and intent of the band, seemingly a more serious and predacious edge coming into play, though inescapable hooks and those ever gripping grooves are just as prevalent in the tempestuous presence of the excellent song.

A sultry air immediately soaks the senses as a broody funk laced bassline hits ears with the entrance of next up Takedown The Bull. It is an instantly riveting start which soon evolves into a Rage Against The Machine stroll with a Pantera like southern grooving to its scenery. The track smoulders and shimmers rigorously within its unrelenting slow heavy crawl, brewing up a tasty boiling of sonic intrigue and melodic causticity. Once more it is hard to claim there is much new on display but for pleasure and accomplished enterprise the song lights the passions.

The EP is closed by Serve The Freakshow, a track opening on a vicious rally of rhythms before casting its own heavy grooving and rhythmic antagonism. It is brewed from the same vat of endeavour as the previous song but equally employs the more classic ingredients found in the opening pair of tracks. It is the weakest song on Fight For Your Life but still another thoroughly enjoyable and easy to engage with brawl to bring the release to a flavoursome close.

Fight For Your Life holds little in the way of surprises but everything about it and the adventure that is Tigerpunch, eventually leaves you wanting more. For the first jab from the band, this is one potent and highly likeable dust-up.

The self-released Fight Of Your Life EP is available from 20th October through all digital stores.