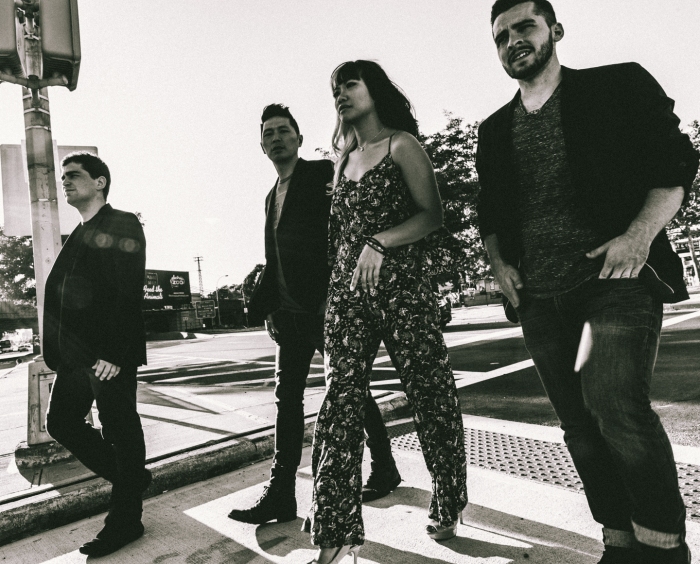 Our introduction to US indie rock band Late Cambrian came with their Social Season EP and became a lustful attraction through second album Peach, a release offering a thrilling dance of vibrant personality with matching sounds and imagination. It was an encounter of at times stunning brilliance within a constantly refreshing and warm temptation which stirred up the passions within seconds of contact. Now the band returns with its successor Golden Time, a release bred from the same eclectic invention and making a potent first impression, but working with a slower more sultry seduction and smouldering pop vivacity reaches the same captivating heights. The album reveals another leap in songwriting and sound maturity without relinquishing the bands almost mischievous use of hooks and melodic grooves. It takes its time to reveal all its depths but Golden Time emerges as another irresistible proposition from the Brooklyn quartet.

Late Cambrian has continued to make impressive marks from debut album The Last Concert released in 2011, onwards. Their Social Season EP of the following year raised the bar and bred one of their most successful and greedily devoured songs to date, Ryan Gosling. It was with Peach though that John N Wlaysewski (lead vocals, guitars, synth, percussion), Nunzio Moudatsos (bass, backing vocals), and Olive ‘O’ Hui (vocals, synth) sparked a much stronger and global spotlight. Now with the addition of drummer Alex to its line-up, the band offers a new tantalising treat with Golden Time. The band has often been compared to Wheatus, who Late Cambrian are touring the UK and Europe with as this review is posted, but the new album shows a unique and distinctive bloom to its summery sound and presence, which flourishes in that maturity spoken off earlier.

The PledgeMusic funded release opens with an immediately enthralling and virulently infectious Throwing Shade. As soon as guitar stabs, with a tone quite distinctive to the band, crosses ears there is a warm glow in emotions and imagination bred from past experiences with Late Cambrian’s invention. There is the quirky manner and enterprise which fuelled the last album on immediate show but also a melodic elegance and relish which provides new scenery to indulge in. The welcoming and harmonically bracing vocals of Wlaysewski backed by Moudatsos and O, embrace like an old friend but again with a new hue to their enterprise and stature. It is a thrilling entrance which the song reinforces across its length with a transfixing wash of radiant keys and punchy rhythms, but it is the Steely Dan like caress, vocally and musically, which steals the deal.

The following title track is no less compelling and invigorating. Electronic pulses lead to a coaxing guitar twang, which in turn moves into a bold stride of crisp rhythms across rich and magnetic melodies. The song’s title fits the sound 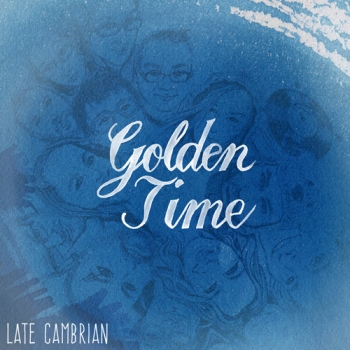 within it perfectly, the duet of vocals between Wlaysewski and O as seductive and bright as the feisty pop melodies dancing around them. Again there is a contagion to the song which is inescapable for ears and an energy enslaving feet but it is its melodic swing that ignites another hungry urge in an already keen appetite.

Illamasqua swiftly installs its insatiable persuasion next, rhythms and vocals the prime lure initially, before the song slips into a tenacious stride of jabbing beats and lively yet sultry keys. As with many songs on the album, there is an instant familiar breath and touch to it which by the close you realise is simply from the band having their own distinct sound and presence. Also noticeable is that the song hints it has a fire to expel but instead remains in its enjoyable smouldering. This happens a few times across Golden Times and though at times you wonder how things would go if the band had ignited that extra mystery spark, the album flourishes in its inventively controlled and imaginative calm.

Both Game Show and Now keep the creative and appealing flames in ears and emotions sizzling. The first is a gentle canter of a song with potent and varied vocals against eclectic melodies and unpredictable endeavour, all flirting around a deliciously throaty bassline, whilst the second flows with a slow seducing of mellow yet vivacious vocals within a web of sharp hooks aligned to wispy blues kissed melodies. Though neither quite grips the heights of certainly the opening pair of tracks, both shine with a blaze of charm and bold imagination before making way for the thrilling romp of Objects May Appear. Big riffs and beats dance with ears straight away, their tango irresistible and only enhanced with the joining of similarly jaunty vocals from the band in turn. There is no escape for body, voice, and emotions to the album’s anthemic lure, the track a beguiling and fascinating stomp taking best song honours.

DYBIL with its crystaline melodies alongside riveting vocals and harmonies, provides a powerful romance for ears and senses to immerse in and passions to grow for whilst the following acoustic hug of the emotive Montauk simply whisks the imagination off on a seductive waltz to leave satisfaction brimming. Both reveal more of the evolution in, and growth of, enterprise and songwriting within the band before Shiny Cars brings the album to a healthy close. The outstanding final song has a thick and heavy resonance absent from much of what came before which again only offers another enjoyable shade to the album, whilst it’s gentler but lively vocals and melodic adventure only declares that this is a band coming of age.

There is no go for the jugular stand-out on Golden Time, no jaw dropper like Ryan Gosling or Wolf, but every track has a body and heart which outshines plenty of Late Cambrian’s impressive catalogue and combine for the band’s finest moment yet. For beautifully sculpted and dramatically radiant rock pop it is hard to think of many better offerings this year than Golden Times.

Golden Time will be available in November, for more details and remaining dates on their tour with Wheatus and  MC Frontalot go to http://www.latecambrian.com/