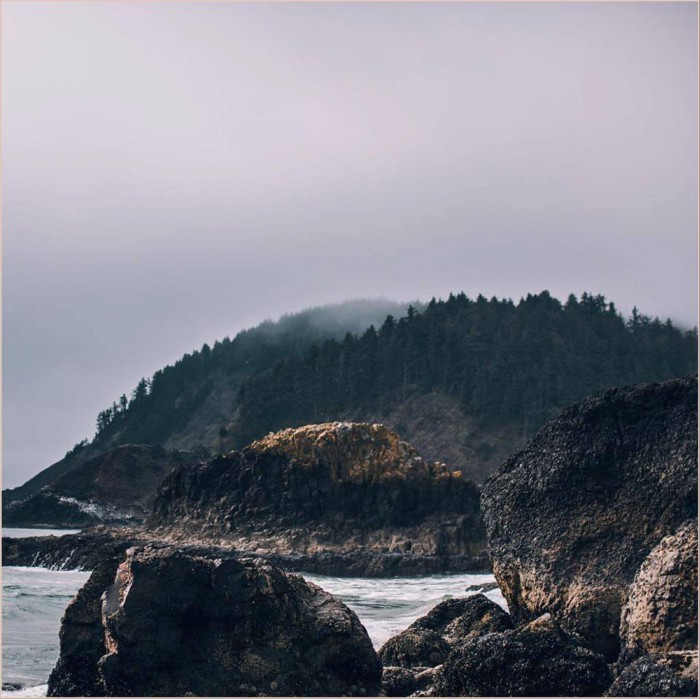 This October seems like it is the month of split releases, many compelling link-ups sharing some striking sounds and bands. Unquiet Records are releasing one of the more notable encounters in the shape of a split release between Polish hardcore bred post metallers Fleshworld, French blackened post-hardcorers Gazers, and Italian psychedelic metallers Viscera///. It is a gripping collection of songs which come from different angles of sonic consumption but unite in a mutual heavy and depressive examination of senses and imagination. It is an enthralling proposition, a release which can devour ears and emotions in a nihilistic landscape of intensity and sound but also treat them to contagious and just as toxic refreshing enterprise.

The first three tracks are provided by Kraków quintet Fleshworld, a band drawing on inspirations from the likes of Opeth, Neurosis, Cult Of Luna, and Deathspell Omega in their sound. They have already awoken attention through previous 6-track release Like we’re all equal, also released on Unquiet, and here get the split off to an imposing and potent start. Their first track Krąg grips ears with a sonic lancing before bulky rhythms twist over the senses. It is a tasty start added to by the melodic groove wrapping around the initial bait of the song. With a vocal sample adding to the emerging shadowed drama, the track flirts and intimidates with equal success, the guitars of Mateusz Szczurek and Kuba Leszko sculpting a captivating design within the increasingly darker and oppressive rhythmic provocation bred by drummer Szymon Łuczyński and bassist Łukasz Klamiński. The song continues to threaten and seduce, as the raw vocal squalls of Tytus Kalicki rage and spill venom across the bewitching consumption of ears and emotions. Acidic melodies and barbarous hooks are never far from the surface of the growing tempest though, it all making for a scintillating start to the release.

The band’s other pair of songs never quite match up to the first such it’s might, but Pętla with its heavy resonating bass lure and similarly magnetic rhythmic enticement certainly comes close. It is a captivating entrance which spreads a blackened and caustic breath across its spine through evocative melodies from the guitar and a raw hostility to the vocals respectively. It emerges as a brooding and increasingly chilling erosive wash which leaves thoughts lost in a barren corrosive soundscape and emotions exposed to a stark sonic climate. Its successor Rezygnacja, which features guest vocals from Alex Stjernfeldt and Victor Wegeborn from The Moth Gatherer, is similarly drenched in uncompromising and oppressive textures within a destructive atmosphere, but again shape its scenery with an impressive and attention gripping display from drums and bass. The rawest uncomfortable track of the three, it reveals more of the immersive depths and skilled composing of Fleshworld and their ability to lock the listener willingly into a scarring embrace.

Hailing from Paris, the 2012 formed quintet of Gazers has also earned a potent reputation through their self-titled EP of last year and live shows where they have graced stages alongside the likes of The Rodeo Idiot Engine, Cowards, Loma Prieta, Code Orange Kids, and Twitching Tongues. There first contribution to the split comes in the intrigue drenched Rash, a track taking its time to seize the senses. From a cold and raw ambience also infused with sampled vocals, though a distant whisper here, the song erupts in a blaze of hardcore, crust surfaced animosity. Spiky hooks and cruel grooves emerge as vocals roar with malcontent, a greater anger and maliciousness coating each step of the song’s evolution. It is a potent track which makes for a keen but uneasy listen before the stronger weight and adventure of The Decline takes over. Firm beats and rugged scythes of guitar are met by a deranged flame of riffs, everything at odds but fitting masterfully to ensnare ears and appetite. Further in a mellower but no less stark and intimately imposing passage plays with the imagination too, it adding to the great unpredictability of song and the band’s engrossing enterprise.

The following Epilogue is the same, a song never allowing thoughts and emotions rest as it roams and permeates the senses with a revolving rage of gripping rhythms, sonic abrasing, and vocal ferocity. The best of Gazers’ trio of offerings, the track is a maelstrom of creative spite and imaginative turbulence worrying and igniting the senses for an intensive and flavoursome examination.

The final two songs on the release comes from Viscera///, a band employing essences and experiences in styles like post hardcore, space rock, ambient, and drone, gained by members past and present of bands such as Morkobot, Blanca Division, Malasangre, The Drop Machine, Mount Piezein Circle, Edema, Wicked Minds, The Vendetta, and Self Human Combustion. With two albums, many splits, and tours all across Europe under their belt, the trio now turn their attention to the split and unleash their gripping mix of metal and psyche rock. Versus swiftly tightens its steely grip on ears with rigid beats and acerbic grooves, they a spring board for subsequent waves of rolling rhythms, ravenous blackened pestilence, and in turn voracious tsunamis of sound and malevolence. It is a hellacious mix but one where very turn is complete with sparking twists of invention and sonic radiance.

Its successor Nobody’s Diary, a cover of the Yazoo track, ignites ears and imagination with even more triumphant ingenuity next. The track instantly storms the psyche with virulent and scathing riffery as sonic blooms break out around its tempest, but it is the unexpected display of clean vocals which tips the balance and inspires a delicious multi-flavoured landscape of warped and imaginative endeavour to steal the passions. With its sound aligned to a thick sludgy furnace of hostility, the song is an outstanding end to a rather impressive and thoroughly enjoyable encounter.

Personal tastes dictates which songs stand above others but every track and each of the three bands, make a compelling and richly satisfying persuasion impossible to resist.

The Split release is available now via Unquiet Records @ www.unquietrecords.com/product/fleshworldgazersviscera-3-way-split/