Though it makes a potent initial impact, Dystopia does its best persuasion over time, worming under the skin to provide a perpetually pleasing and exciting proposition. It is an album which can be described as being made up of familiar parts but those essences aligning for something fresh and invigorating from a band drenched in potential and riveting creativity. Bands such as Rage Against the Machine and Deftones are constantly and to be fair rightly offered up as references to the sound of Another Dead Hero but it is only part of the imaginative incitement provided by the band, spices twisted into something more distinctive and flavoursome from the UK quintet.

Hailing from Burnley and formed in 2003, Another Dead Hero has spent the subsequent years building and honing their sound whilst infecting the expanse of Britain with their uncompromising creative attitude and adventure. As evidenced by their album, the band has a raw touch and breath to their music, an honesty to their sound and invention which is just as potent as the imagination within it. The live presence of Another Dead Hero has persistently marked the band out, as has their previous trio of albums, but it is Dystopia which it is easy to feel has the key to reach the strongest spotlights.

The dark climate and menacing atmosphere of Intro opens up Dystopia, its electronic jungle intimidating scenery for the imagination to spark against before the piece flows straight into Change The Game. Beats and riffs are soon rummaging in ears before settling into an imposing and formidable provocation. Limp Bizkit spiced vocals and scythes of guitar cross the spine of the song whilst an aggravated persistence breeds in the guitars to pressure ears even more potently. It is a strong and pleasing start which slips into darkened Deftones mellowness before merging both climates along the way. The vocals of Josh Baldwin roar and croon with a flavour of Keith (now Mina) Caputo to their provocative tone and texture, whilst the fierce raps of drummer Gaz Connor and the grizzled tempting to the bass of Craig Robertson snap and growl with dark intent. Added to the guitar antagonism and craft of Daniel Crawshaw and Josh Beckwith, it all makes for a formidable full start to the album with its closing One Minute Silence like finale especially anthemic and biting.

The following Greed grumbles with a heavy breath and intensity from the start, the Rage Against The Machine essence which was a loud whisper in its predecessor steering the stalking brilliance of the track. The instant blaze of sound and 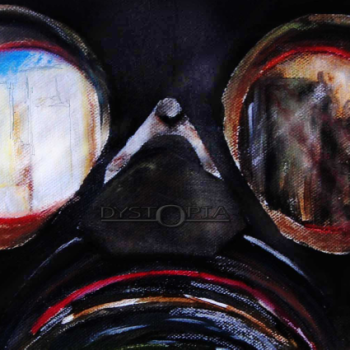 vocals soon drops into a prowling gait led by weighty bass shadows. It is a scintillating passage to the song, again One Minute Silence coming to mind alongside that of Zack de la Rocha and co. It is also a minimalistic attack but gloriously gripping and incendiary for ears and passions as it preys on thoughts and psyche with every dark twist and furious blaze. It is the first pinnacle of the album setting a high plateau for System to aspire to. The song is a muscular and busier offering but still holding a rein on its attack to stroll with threat around the senses. Life of Agony comes to mind as the brief track expels its intensive provocation before making way for the volatile hostility of Bullshit (Voice Of Lies), a furious and confrontational assault unafraid to venture into calmer waters. It as the previous song does not match the early peaks but easily provide compelling and richly satisfying confrontation.

The volatile temperament of I Don’t Care comes next, a song merging the reflective elegance of a Nine Inch Nails and Palms croon with the agitated resistance of RATM and Kennedy Soundtrack. It is a transfixing encounter, a revolving wind of melodic caresses and sonic causticity which entwine for an intriguing and captivating proposition. Its lingering presence is emulated by the next up Infection. As all songs there is a raw and abrasing resonance to its presence which almost haunts the senses as the resourcefulness of the guitars and rhythms explore their individual, and here almost tribal antagonism. Like the album generally, it is not a song to set off a fire in the passions though it has them boiling up nicely, but a song which as its title suggests worms away for lingering and just as potent pleasure.

Stoner presents a more voracious offering, its fuller alternative metal and heavy rock persistence a provocation which veins its bracing bait with melodic mystique and spicy grooving. Grunge flavouring also offers its colour to the song’s landscape, essences of Soundgarden and Gruntruck adding rich hues to the nu-metal/alternative metal exploration. An excellent examination of ears and thoughts it is matched by the weighty energy and depths of Fist Full Of Anger. From a melodic coaxing the song ripples with grizzled basslines and fluid vocals, flexing its sinews and emotional fury with evolving intensity and diversity. It is another which smoulders rather than burns but emerges as an enthralling emotive struggle.

The more than decent ebm/electro fuelled instrumental Control MKII makes a break in the rage of the album, though its air is equally portentous and challenging, before the dark sinister tones of the outstanding Feed Me Your Lies moves in on the imagination and passions. Its gentle but predatory start is hypnotic, smooth vocals and tantalising melodies seducing ears before the track shrugs off its calm for a rugged and thrilling confrontation. The track never explodes, walking that edge before providing another dose of the mesmeric enticement which opened it up, and though the lack of that final spark is missed it cannot stop the track making another dramatic and thrilling statement within the album.

Closing with a fiery and enjoyable remix of Remember This Day, a track from previous 2009 album Generation Zero, Dystopia is a feistily satisfying release. There are times where songs hold a too similar character though it is never long before inventive and exciting twists ignite their canvas, but ultimately the album provides more than enough proof that Another Dead Hero is heading towards the fullest attention nationally and beyond, especially if they find the underlying strain of originality which arguably is still untapped.