In Love Your Mother – The Great Ape Project 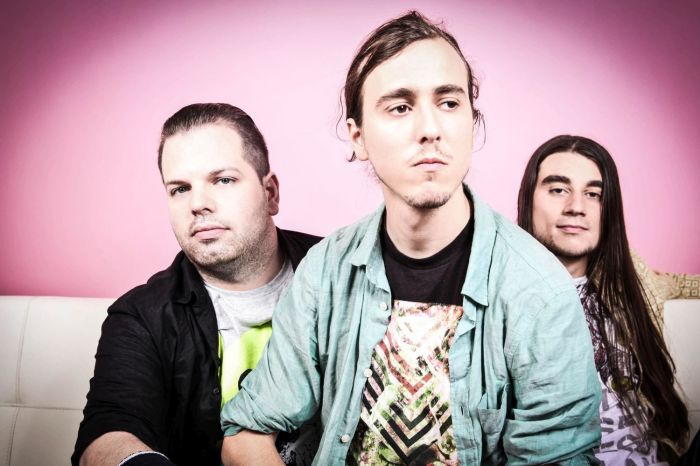 As well as holding gripping and inventive sounds, a song and release should be an adventure for ears and imagination to make the strongest connection, and they do not come more of a creative and challenging emprise than The Great Ape Project from Swizz trio In Love Your Mother. The album is a riveting and invigorating maelstrom of sound and deranged invention which leaves no stone unturned or bedlamic idea left in the shadows. Cramming eighteen songs in just over thirty minutes of creative mayhem means the album warrants and needs full attention so as not to miss any of the exhilarating drama within tracks which range from fourteen seconds to just short of four minutes in length. But the rewards are unrelenting and furiously imposing in one of the albums of the year.

Hailing from Zürich, the trio of guitarist/vocalist Valentin Baumgartner, bassist/vocalist Amedeo Mauriello, and drummer Andrea Tinner, unleash a sound which reaps the essences of mathcore and progressive metal and filters it through a vat of avant-garde, grindcore, and metalcore ingenuity. It comes out as a sound which can be best described as The Dillinger Escape Plan and System of a Down meets Destrage, Toumaï, and Kontrust yet isn’t like that either. It is a unique concoction which flirts and dances with senses as it brutalises them, and quite irresistible.

Themed by the sick and bad world our mothers warned us of, In Love Your Mother start the album and examination with The Mother Song. A thirty second tsunami of vocal causticity and rhythmic hostility speared by a sonic spite and toxic groove which all combines for a furious and concussive but appetite inflaming onslaught. Its swift assault is followed by the less intensive but no more lightweight 2116@#1916. It is immediately contagious, something alone impressive such its brevity of length, a slice of coarsely melodic and respectfully corrosive groove metal which slips agreeably before the vicious presence of We’re Gonna Dance Till Everyone Is Naked And Fallen Apart takes over. A metalcore canvas of vocals and maliciousness is soon twisted and bound in a weave of unpredictable and schizophrenic invention, the guitar of Baumgartner scything and spearing the heart of the tempest with breath-taking and psyche addling ingenuity. It is a manic endeavour matched by the swinging arms and prods of Tinner and the throaty creative predation of Mauriello. The longest song on the album, it explores and evolves with every second, bewitching and bewildering ears with almost hostile intent. The beauty of this and all songs, is the seamless and fluid transitions, one moment a bestial rampancy becomes a seductive croon and melodic embrace in another, all without a twitch of uncertainty or flex of

Johnny Rocket Is Not Dead launches its majestic uncompromising tirade next, grooves and bass temptation as eager and impacting as the vocal squalls and twisted sonic probing aligning to a rhythmic badgering. It is only one turn in the fifty second odd track though, as mentioned earlier every chord and jab of drums the detour to new and generally enthralling bliss, as evidenced no more potently than in Signs Of A Medium Life which splits the two parts of the title track. A hardcore/grind fuelled provocation, the track savages and pounds on the senses from the off. Riffs and beats show no mercy within the stalking gait of the song nor the blistering vocal roar which also has some restraint in its confrontation. Through the storm though, there are small and larger slithers of inventive majesty which enthral as much as the bruising thrust of the song.

The two bits of The Great Ape Project grab the hunger inspired already by band and album, but are swiftly surpassed by the brilliance of the also two parted Wish Me An Ocean, the first of its two scintillating movements a furnace of sonic fire and blistering psychotic beauty steered superbly by bass and drums. From the hasty senses foraging of its counterpart and the haunting piano sculpted drama of Drop The Back Of The Line, In Love Your Mother ignite another major blaze with Signs Of A Real Life. Striding forcibly with rhythmic and sonic nostrils flaring, the track soon slips into something more cantankerous and intimidating, crawling over senses and thoughts with a rabid breath and bestial intensity. It is just one border of the landscape though, an exotic melodic insanity blooming before a final fury emerges.

Through the thrillingly deranged, slightly post punk/noise rock spiced The Disco Fish, the melodically searing and perfectly crazed Inhale, and the restful and emotionally unbalanced Wish Me An Ocean Part 0, the album continues to engross and disorientate. But it is all just an appetiser for the pinnacle of the album, which is the song In Love Your Mother. With its first touch, a ridiculously addictive groove which only intensifies its lure as it is joined by rampant beats and a pleasingly varied vocal persuasion, the track is pure sonic and inventive alchemy. Demanding and infectious, imposing and wantonly accessible, it is a bargain for the soul made of the devil, a term which applies to the whole of the album.

The Hedgehog is more pure in its assault, its extreme metal rabidity direct and untethered yet still veined by a sonic enterprise to spellbind ears and thoughts. Its potent success is emulated by the inhospitable but irrepressibly catchy Ein Hase, Zwei Haese. With a swagger which only inflames its savagery and warped ingenuity equally, the track is a twisted mouth-watering blaze of unpredictability and extreme metal maliciousness to linger over.

Closed by the lo-fi folk croon of a track simply called Outro, The Great Ape Project is a sensational introduction to a band with the potential and invention to turn metal on its head at any time. The release is one of the real triumphs of the year and deserves the fullest of attention.

Like Loading...
‹ A Breach of Silence – The Darkest Road
Raw blood and ceremonies: talking Antropomorphia with Ferry Damen. ›