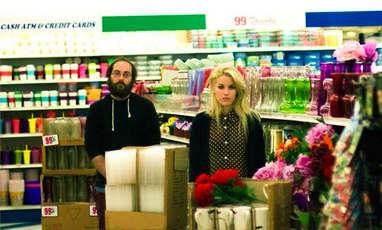 A smouldering seduction of fiery sonic tenacity and vocal charm, US band Dirty Dishes has been a gripping proposition for quite a while through their attention grabbing releases and senses scorching sound but the band have laid down their most potent and thrilling marker with new single Thank You Come Again. Entwining grunge, punk, and noise rock in one raw and spellbinding wash, the band’s new release ignites an instinctive hunger in ears and emotions with consummate ease and skill.

Hailing out of Boston, Massachusetts, the now Los Angeles based band is the brain child of Jenny Tuite (guitar/vocals) and Alex Molini (synth/bass), the pair initially meeting at a party before subsequently uniting their creative craft and vision in the feisty shape of Dirty Dishes. It took little time for the pair to spark eager attention and appetites for their sound and presence, the band going on to play over the years with the likes of Passion Pit, Autolux, Speedy Ortiz, Trail of Dead, Best Coast, and Weezer. Both their self-titled EP of 2010 and the following The Most Tarnished Birds EP two years later drew acclaim but it is easy to suggest their contents were mere appetisers for the deepest inventive majesty of the band to be discovered, starting with Thank You Come Again. The single is a new twist in the noisy invention of the band, a loftier peak of contagious yet uncompromising sonic devilry which is quite scintillating.

A swift and brief blaze of guitar bred noise opens up the gates for a heavier breath of sonic intensity to escape the song, before it relaxes into a gentle caress of excellent vocal temptation from Tuite. Her voice mesmerises from the first note, its beauty courted by a dulled bass tone and jabbing beats before the returning caustic flame of energy and sound returns to ignite the senses. The song continues to revolve and merge both aspects of its raucous and transfixing beauty, the track enslaving thoughts like a mix of The Pixies, Sonic Youth, and Belly.

Thank You Come Again is a sensational sweet abrasion on ears, a rigorous examination which flirts poetically whilst searing the senses. An introduction for some to Dirty Dishes and a continuation for others of their already impressive presence, the single is a gripping next step in the rise of a band destined to breach a global spotlight.

Thank You Come Again is available from September 29th @ http://dirtydishes.bandcamp.com