Madrost – Into The Aquatic Sector

Once past the annoyance of the vocal squeal which instantly ignited the hostility of personal taste at the start of the second track of Into The Aquatic Sector, the new album from US death thrashers Madrost only provided one deeply satisfying and enjoyable rampage. Thirty minutes or so of raw and contagious pleasure the album buffeted, antagonised, and most of all thrilled ears and emotions through its eight inventively angry slabs of extreme metal hostility. It is not arguably ground breaking stuff but it is the making of a long-term attachment to a band bringing a freshness and devilry to the thrash scene.

Based in Lake Forest, California, Madrost formed in 2007 and was soon an attention grabbing force in the metal underground scene around Los Angeles and Orange County. A trio of demos across 2008 to 2010 alongside the band’s live presence reinforced their emergence before the Infected Chaos EP of 2011 and especially the well-received debut album Maleficent a year later, pushed the band to wider recognition. Now they look towards the wider world with Into the Aquatic Sector and such its accomplished tempestuous ideation and sound it is hard not to see it making a noticeable mark in the global metal scene.

A brief atmospheric instrumental opens up the album, The Unknown, a sinister melodic coaxing which initially seems at odds with what is to follow but in hindsight works quite well with its portentous hint at the more progressive essences blossoming in later tracks. The suggestive piece makes way for the instantly rousing attack of Frozen Beneath The Snow. Within seconds riffs are gnawing the senses and punchy rhythms challenging ears, the heavyweight incitement not startling but definitely anthemic in its lead. That earlier mentioned vocal piercing leaves an unwanted shudder, but again just down to personal preferences, before the track twists and flirts with the imagination through spicy grooves, unrelenting riffs, and the great brawling vocal scowling of vocalist/guitarist Tanner Poppitt. There is a fury to the heart of the song which finds release through the incessant and varied guitar hostility of Poppitt and Alejandro Pelaez, and most potently the crushing beats of Cesar Escobar. Just as potently a melodic weave also adds its invention to seemingly not temper but inflame the anger of the song further. 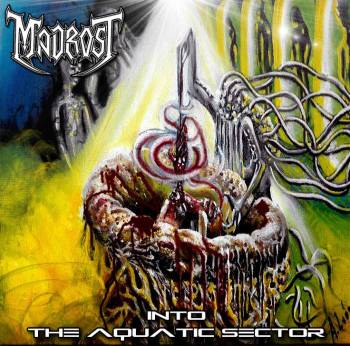 It is a great full entrance into the album matched right away by Universal Energy. From its first breath within a hellacious rhythmic battering, the guitars spin a progressive kissed melodic enticement before joining the savage intent of the track. The bass of Richard Orellana grumbles and incites just as imposingly as the skilled enterprise of the guitars and drums, again hostile and seductive tendencies finding a union to impress and thrill. Apart from more sonic vocal expulsions, the song hits the spot leaving neck muscles and senses happily throbbing before passing the album’s ferocity over to Operation: Xenomorphic Protocol. Entwining moments of unbridled assault and stalking predation, the song transfixes through the imaginative aural sculpting of the guitars. At the start we said the album was not setting new templates but there are times as in this riveting proposition where Madrost cast something uniquely fresh and compelling.

The Oceanic Prelude is another instrumental to allow a catch of breath, forty two seconds of melodic beauty reinforcing the impressive craft of the guitarists and songwriting in the album. It sets the imagination up nicely for the following savagery of Subterranean Nightmare, its first touch a maelstrom of concussive beats and scarring riffs. The short piece also marks where Into The Aquatic Sector leaps to another plateau, its successor an exhilarating fusion of heavy and thrash metal ferociousness aligned to more progressive ingenuity. There is even a great passage of jazzy enterprise from the bass of Orellana to leave a wider satisfied grin on the passions.

Its masterful success is matched and surpassed by the final pair of songs. The title track is a tempest of sound and creative devilry from the first rhythmic slap and sonic violation. Twisting with dervish skill and flirting with the imagination through its fiery genre fusing invention, the track is still a trash driven ravaging of the senses but unafraid to slip into something more melodically comfortable to spark rich intrigue and fascination. The closing Depravity is a more malevolent beast, driving for the jugular with raw riffs and violent rhythms not forgetting spite blessed vocals. It belies its viciousness though by a contagious swing to its grooves and infectious devilry to its melodic endeavour. The result is a seriously addictive and bruising stomp which thrills body and soul as it rips through them with sonic animosity and rhythmic brutality.

It is a glorious end to an outstanding album which with each listen does make you re-equate its originality. That aspect can be debated but what cannot be denied is that Into The Aquatic Sector is an exciting beast of an album and Madrost a band with all the potential to ignite extreme metal ahead.

The self-released Into The Aquatic Sector is available digitally and on CD now via CD Baby, Amazon, and i-Tunes.

Like Loading...
‹ Melodic fire and raw passion: an interview with Kyle MacKenzie of 7stbaby
Radium Valley – Tales From The Apocalypse ›