Born from the ashes of Italian thrash death metallers Esequie, Dominhate certainly make a convincing and impressive call their way with debut album Towards The Light. Formed in 2008 the members of Dominhate evolved from the sound cast their former band into a more death metal focused onslaught on ears and senses as new members joined the emerging force in the Italian underground scene. Breeding their own distinct if not yet wholly unique sound with inspirations from the likes of Morbid Angel and Incantation, the Pordenone hailing quartet have put down a strong marker with their first full-length. Released on The Spew Records, a division of Punishment 18 Records, it is not a startling encounter but one which pleases, lingers, and awakens a strong attentive interest in the band.

The title track provides an atmospheric entrance to the release, the album seemingly yawning as it wakes within a sonic haziness and intimidating ambience. It is fully alert and sizing up senses once The Light of the Last Legion spreads its inviting grooves and imposing rhythmic bait across the imagination. Soon into a muscular and intensive provocation, the song creatively stumbles through ears. The rhythmic attack is unpredictable and furious, corrosively matched by riffs and guttural vocal squalls as the track continues to intensify its weight and oppressive textures. An early representation of the album, the opener is not a dramatically striking provocation but undeniably one veined by skilled enterprise and creative intrigue for a richly enjoyable encounter.

Its potent offering is surpassed by the virulent animosity of In the Principle the Great Sleep. Riffs and grooves again align to create a contagious web punctuated by the feverish hostility and craft of the drums, they in turn skirted by a 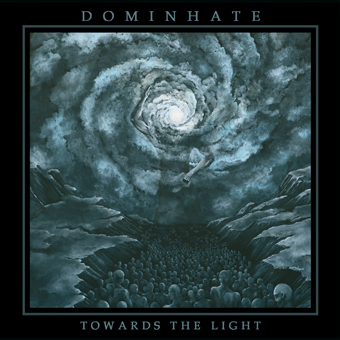 throaty bass predation. With the vocals shedding predacious intent and malevolence, the track is a voracious savaging of old school death metal with modern attitude and imagination. Its gripping presence is surpassed by The New Wave of Domination, a track developing an infectious violent swing to its persuasion once it has driven through a tempestuous ravaging of sonic hostility and rhythmic provocation. Like its predecessor the fury is as unrelenting in its ruinous attitude as it is in its inventive swagger, feasting on ears with insidious ferocity and corruptive relish.

Both The First Seed and The Essence of the Choice provide new scenery to the album, the first of the two spreading a sinister and slowly invasive atmosphere over ears and thoughts whilst guitars spin an evocative web of dark intent as restrained but firm rhythms punctuate the sonic narrative. It is a gripping landscape for the imagination to feed upon, the darkening and increasingly rugged terrain of the song only sparking a greater compelling lure to immerse the senses. Its successor explores a lighter adventure, compared to its predecessor, yet still energetically and feverishly soaking ears in blackened revelry and erosive death metal tenacity. The track is a torrential ravishing, arguably low on surprises but high on thrilling and skilful incitement.

Through Perception and Obscure the Call of Salvation, band and album continue to batter the barricades with accomplished craft and enthralling enterprise. The first is a steady but forceful stroll driven by fervour drenched riffs and anti-social beats. Clad in addictively winding sonic endeavour it makes way for the thicker pestilence of brutality and vocal rapacity from the second of the two. Both tracks fuel an already contented appetite over the album, if without reaching heights forged by earlier songs, though that is soon re-established by the ruinous might of King without Crown, a gripping tirade of waspish grooves and crippling rhythms under the demonic thrall of the vocals. It is an outstanding violation which alone makes Dominhate a band worth searching out.

Towards the Light closes with Redemption of One, an engrossing surrounding of the senses with antagonistic design to its raw and ravenous presence. Again intrigue and thought provoking invention spreads infectious toxins across the constantly growing and persuasive might of the track, another sizeable triumph the reward.

It is probably fair to say that Towards the Light does not offer any real surprises but equally it definitely does not give house room to predictability. The album is a richly pleasing and exciting encounter drenched in a potential which suggests that Dominhate is an emerging force of the future and a satisfying pleasure of the now.

Towards the Light is available now via The Spew Records @ http://dominhate.bandcamp.com/releases