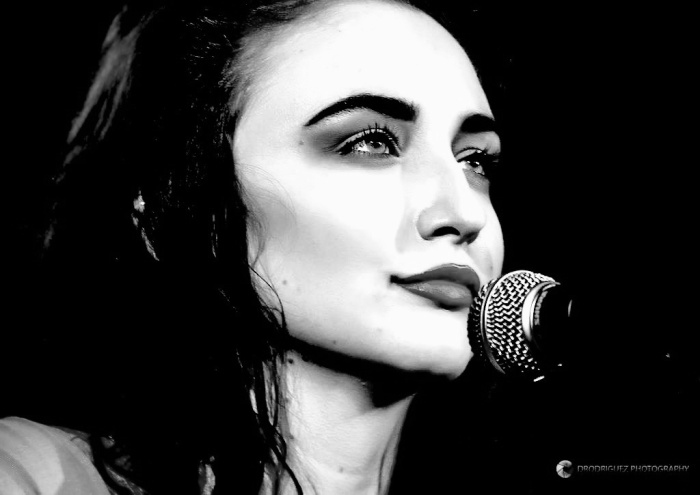 A smouldering and climactically sultry embrace for ears and imagination, Together Alone is further proof of the magnetic and striking talent that is Hollie April. The new single is a delicious evocative caress of drama and emotive seduction which whilst reinforcing the already impressive presence of April unveils a new vein of potential to her songwriting and sound, which in turn will surely leads to an inevitable increased spotlight on the lady.

The 22 year-old British singer-songwriter was born and raised in Gibraltar and from the age of 12 was performing professionally. Studying at and graduating from Leeds College of Music with a BA(Hons) in Music Production, 2013 saw April performing at an array of festivals and sharing stages with the likes of Emeli Sandé, Level 42, Texas, Lawson, and Olly Murs. Her debut EP Marionette stirred up excited attention and acclaim with its release at the tail of 2013, the song The Sun and the Sea from it especially garnering potent praise and focus. Now Together Alone is poised to open up a new charge of hungry appetites and acclaim through its mesmeric beauty and compelling imagination.

A caress of guitar assisted by a minimalistic bass stroke opens up a deeply evocative breath to the song. It is a captivating entrance swiftly joined by the fascinating voice of April. As expressive as they are harmoniously intriguing, her vocals spellbind ears and thoughts immediately, flirting with the imagination and the gently coaxing sounds beneath her. It is only the start of the song though, the first passage in a masterful and inventive flow of ideas and sound. A heavy strum of guitar triggers a potent stride of rhythms and elevation in the richness of both April’s voice and passion next with thoughts of Katie Bucket and UK band Jingo immediately springing to mind, the pair sharing an organic and senses inflaming ability to melodically roar.

The song continues to ebb and flow in its energy whilst increasing the startling, dramatic air and texture of its presence and narrative. It is a glorious adventure emotionally and sonically, with April’s voice an evolving climate of charm and melodic beauty. The song is bewitching as it reveals another character to the presence and craft of April, a broad yet intimate sunset for thoughts and feelings.

Hollie on the evidence of her EP and new singles is destined to make major melodic statements within British rock and pop music ahead; she has already started to be fair with Together Alone.

Together Alone is available digitally from September 22nd