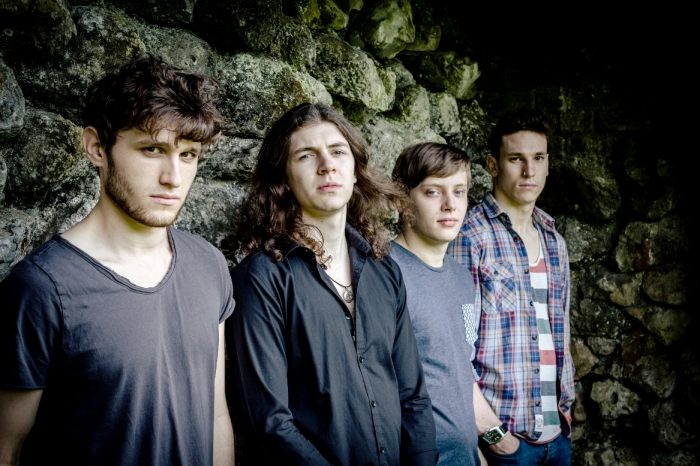 Spinning a web of varied and flavoursome enticements within their alternative metal bred imagination, UK band Apherium continue their potent emergence with the national reboot of latest EP Neoteric. Containing five tracks which not only reinforces the already established weight and creative invention of their sound but pushes it into an even more exploratory and expansive landscape, the release is a fascinating proposition which maybe does not light raging fires in the passions but certainly sets a lingering and brightly smouldering captivation.

Founded in 2011 whilst members were at college, the Yeovil quartet took little time to hone their intent and sound as shown by debut album The Cycle the following year, which itself followed a self-titled EP. Initially taking inspiration from early thrash and heavy metal, the band’s sound was swiftly evolving by their well-received full-length and even more so with the single Shadows which came out in 2013. It set a teaser for things to come and now explored fully through the Neoteric EP. There is an aggression and power to the release which has its seeds in the bands early days but also a melodic enterprise which revitalises influences found in the likes of Biffy Clyro, InMe, and more so we would suggest Funeral for a Friend. It is a tight and compelling mix which takes little time to thrill and persuade as the EP opens with New Light.

The first track shimmers with a crystalline stroke of a guitar crafted melody to awaken attention before a throaty bass lure aligned to thumping beats sets down its own imposing bait. To that there is an unexpected growl of electro tempting,

though it is soon immersed in the full weight of the song’s intensity. A slip into a restrained stroll follows with the vocals of Larry Turner stepping forward, well backed by the supporting calls of the band, to join a pulsating funk kissed bassline from Callum Shortland. It is just another twist in the song though as it ignites again with a raw glaze of riffs from Turner and Ross Derby against imposing strikes from drummer Ashley Jones before a folk stomp of strings joins the raucous revelry, these provided by guest musician Joe Labanowski. It is a riveting proposition, as unpredictable as it is magnetic with the short bursts of returning electro deviltry and the progressive ambience that wraps around its climax more striking invention to the exciting opener.

Silver Tongues comes next with a forceful wall of caustic riffs hitting ears first, though they are entwined with rich sonic lacing and slow jabbing beats. A melodic relaxation emerges soon after with emotive expression from Turner’s vocals and narrative. The progressive endeavour of Derby infuses further rich colour to the song whilst backing vocal scowls and antagonistic rhythms leave an intimidation which nicely tempers the surrounding warmth. Though strings make an enthralling and potent addition to the skilfully sculpted song, it lacks the spark of its predecessor mainly because the bold invention and unpredictability of the first is missing here. Nevertheless it is a deeply pleasing encounter matched by Angels Of Our Nature. The third song merges choppy riffs and crisp rhythms into a weave of glowing harmonies and poetic melodies which engulf imagination and emotions with ease. There is also a drama to the sound of the song which again without quite finding the heights of the opener leaves a hunger in the appetite already woken by the EP.

That early single Shadows is next, a track which is a ball of fiery energy and aggressive intent yet unafraid to venture into reflective vocals and emotive melodic ideation. Cored by a tempest of outstanding rhythms from Jones and Shortland, there is a robust yet seductive intensity to the song and it is easy to see why it raised strong anticipation in so many for Neoteric as it makes a stirring addition to the increasingly impressing EP.

The release is closed by the emotionally intensive and melodically fired Rise Again, another track which is missing something compared to other songs on the release, yet with the skilled musicianship of the band casting a tapestry of sonic adventure over a cauldron of melodic passion, it is impossible not to immerse eagerly into its thoroughly satisfying embrace. That pretty much sums up the EP too, a truly enjoyable proposition which has moments of outstanding ingenuity within a perpetually rewarding canvas.

The Neoteric EP is available digitally from September 22nd through all stores and on CD @ http://apheriumofficial.bandcamp.com/