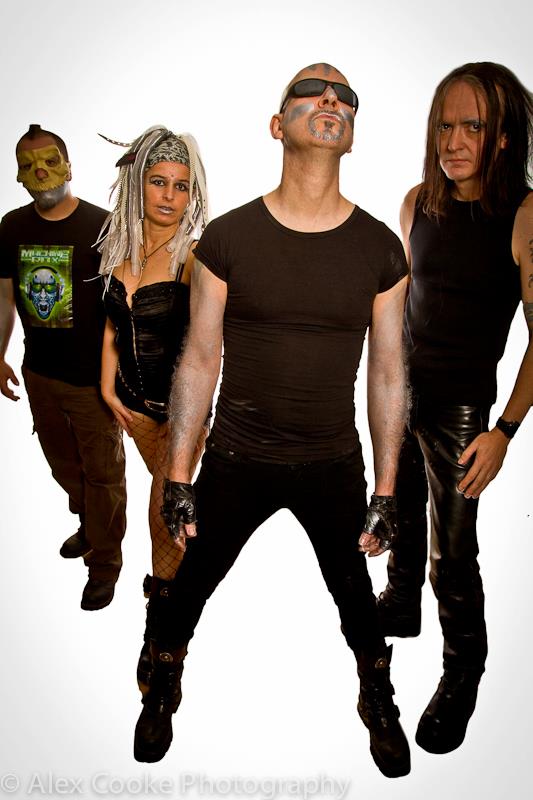 British industrial metallers Machine Rox has never been a slouch in stirring up ears and emotions with its fiery and rapacious energy and imagination, but the London quartet has found a new covetous creative tenacity to consume the senses with new album Next Level. As its title declares, the eleven track adventure sees the band rise to a new plateau in songwriting, sound, and sheer contagious enterprise. Not exactly a game changer but an encounter to set a fierce new blaze within the landscape of industrial and electro rock, Next Level is a gripping and feistily enjoyable rampage.

Originally formed by musician/songwriter Richard K as a solo project in 2007, Machine Rox has evolved into a full line-up consisting of guitarist Val Oproiu, drummer Nuj Farrow, and Aga on keys and vocals alongside vocalist/bassist/ programmer Richard K. Employing his experiences in bands like industrial metallers Meat Machine and Global Noise Attack, and in the sharing of stages with the likes of Rammstein, Napalm Death, and Covenant, Richard after some time away from music began exploring a merger of metal and electro rock in his band’s emerging sound. It is a journey which has intensified and grown with accompanying acclaim through releases such as the Activate Your Anger EP and debut album Shout, both in 2013. Last year also saw the release of the more metal infused Intox EP, a tasty hint of the exploits to be found on Next Level, though to be fair the band’s electro and industrial side is as vocal and potently evolved on the album.

The album flirts with ears straight away through the opening crystalline electro coaxing of Lost My Mind. The first track takes little time to flex its muscles and intensity though, sinew packed riffs and rhythmic teasing combining to challenge and ignite the senses as the vocals of Richard K similarly work on thoughts with his raw expression. The electronic lure of the track provides a contagious enterprise whilst the muscular strength of the song and the vocal bait adds anthemic essences, it all adding up to a riveting and impressive start.

The melodic Front Line Assembly meets Ghost In the Static feel of the song is replaced by the more caustic breath and ferocity of Love Explosion, KMFDM and Godflesh coming to mind though as with all songs the finished recipe is all

Machine Rox. The second track also unleashes an insatiable energy and charge to its pulsating persuasion, synths swirling feistily around the senses whilst guitars and beats cast a heavier and darker confrontation in the relentlessly infectious endeavour. With a glorious solo adding to the proposition, the song continues the outstanding start to the release and is immediately emulated by the heavy and catchy swing of Losers In Your Game. A Marilyn Manson-esque swagger fuels carnivorous riffs and eager rhythms whilst vocally Richard K prowls ears with a provocative narrative cast by his distinctive tones, the mix another slab of inescapable virulence.

Next Level is an album which holds a greater diversity than any Machine Rox release to date, the following warm mellow embrace of Electric Sun one example of the different sides to the character of the album. It is a melodic and seductive smouldering reminding of fellow Brits MiXE1, but also a song unafraid to spread a rawer climate across its sultry canvas; keys and guitars merging extremes for a heat wave of evocative and imaginative adventure.

Both Illusion and Cycle Complete keep body and emotions aflame, the first a bubbling yet bordering on corrosive devilry gaining swift enslavement of feet and imagination, whilst the second has a sinister edge to its imposing presence and electronic fascination. A throaty bass flavouring adds to the song’s drama, its weave of noir kissed shadows soaking the otherwise magnetically fiery track driven by vibrant electronics, heavy metallic riffery, and enticing vocals of Richard and Aga. Though neither song quite finds the plateau of their predecessors, both leave an already hungry appetite greedier before making way for the bewitching instrumental Last Kamikaze. Keys and guitars entwine with melodic beauty whilst the electronic atmosphere of the track provides a mesmeric soundscape for thoughts to drift into their own adventure through. There is also a sterner intimidation offered by slow but voracious riffery, again a blend which results in a stunning incitement for ears and emotions.

The aggressive yet welcoming presence of Breathe Again comes next, its striking metal seeded attack and rabid toxicity instantly contagious as a spice reminding of Gravity Kills and Die Krupps shows itself. Another scorching solo from Val Oproiu lights the exciting and scintillating tempest, its impressive offering contrasted and matched by My Own Religion as a resonating electro temptation swallows the senses to breed a similar weighty enticement as its predecessor. Only nailed to the floor feet could resist its enthralling call whilst the raw glaze to the vocals and the scything guitar invention gives the rest of the body a welcome work over. The two songs show another twist in the nature of the album but each slightly pales against the might of Mind Game. It is a thunderous provocation, rhythms and riffs the heaviest on the album and melodies the most acidic as it evolves into an irresistible almost savage stomp which leaves thoughts and lungs breathless.

The album closes with You Belong To Me, itself another slab of industrial metal loaded with creative voracity and uncompromising attitude within heavyweight infectiousness. It is a thrilling end to an enthralling and rigorously compelling album. Next Level is without doubt Machine Rox at their most potent and thrilling yet, the start of a new adventure which should push the band into a new and greedy industrial /electronic spotlight.

Next Level is available now @ http://machinerox.bandcamp.com/album/next-level

Be sure to catch Machine Rox at the DARK7 festival at The Electrowerkz, London on October 11th