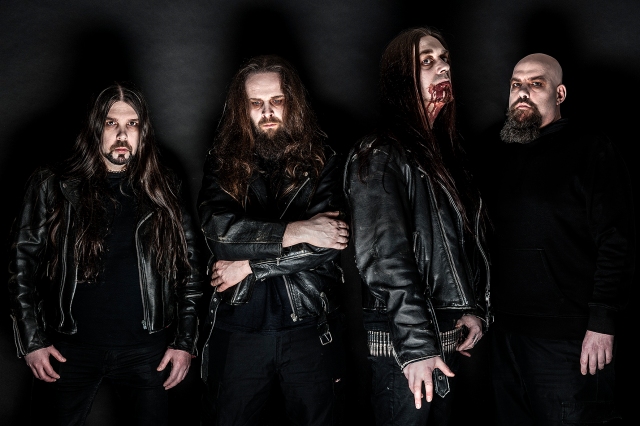 The return in 2009 of Dutch death metallers Antropomorphia brought with it a potent impact on the extreme metal scene especially through the band’s acclaimed 2012 second album Evangelivm Nekromantia. Now the Tilburg quartet unleash its successor Rites ov Perversion, another accomplished and compelling savaging to put a spark into the heart of death metal. It is not an encounter to reshape or offer new realms for the genre but over time certainly one to thrill and add another tasty flavour to its impressive year.

Formed in 1990, Antropomorphia embraced inspirations from the likes of Celtic Frost, Possessed, Death, Autopsy, and Venom as they honed their own uncompromising and honest sound. The demo Bowel Mutilation in 1992 gripped attention, subsequently becoming a long sought after encounter among underground metal fans. Its release led to the band signing with Swiss label Blackened Recordings and the unleashing of Necromantic Love Songs a year later. Its well-received release was followed by band member’s time being taken up by their other projects and Antropomorphia being put on indefinite hiatus from 1999. They did not restrain from writing songs though and in 2009 the band sprung back to life, going on to sign with Metal Blade Records and unleashing Evangelivm Nekromantia. Reawakening interest and drawing new attention to the band, as well as almost getting banned by German authorities because of its violent and occult themed topics, the album led to festival appearances for the band at Neurotic Deathfest and Extremefest. Now Rites ov Perversion is poised to stir things up with its vicious and raw intent, as well as easy to suspect a greater hunger for the band’s imposing presence.

There is no escaping the force and ferocity of the album as opener Temphioth Workings draws up to ears on a crest of rampage riffs and thumping rhythms, all orchestrated by the vocal roar and vehemence of Ferry Damen. Expelling

even greater malevolence through the dark tones of Marc van Stiphout’s bass and the increasingly vindictive swipes of Marco Stubbe, the track proceeds to ravish and seduce the senses and imagination respectively. Grooves nag and thrill throughout as the sonic invention of Jos van den Brand and Damen persistently entangle thoughts and song. It is a great start with nastiness to its breath which is just as rich in the following Carved to Pieces, an openly contagious and irritable proposition. Grooves again steal attention and passions, veining the inhospitable climate and intensity of the thrilling offering for an irresistible persuasion.

The pestilential predation of Inanimatus Absqui Anima comes next; its body a crawling ruinous enticement which stalks ears and emotions yet expels a swing to its beats and grooves which belies the toxic animosity drenching its appealing heart. Its success is matched by Crowned in Smoldering Ash, another rapacious proposal from the band taking its time to size up its victim before spilling demonic and sonic toxicity through its hostile design. Neither track matches the heights of the first pair of songs yet bind ears and thoughts in a healthy dose of creative malevolence to keep appetite for the album greedy.

Nekrovaginal Secretions is a romantic little number if being smothered in venomous riffs and salacious sonic causticity lights your fire. Grooves twist emotions around their acidic flame with ease, again seducing without reserve as a punishing and creative tsunami of rhythms from Stubbe shows little restraint to their precisely skilled animosity. It is a glorious violation of the senses swiftly matched by the ravenous presence of Gospel ov Perversion. The track is a maelstrom of enterprise and raw hostility, merging a twisted melodic radiance with blistering sonic endeavour and rancor.

Through the hellacious and addictive bad blood of Morbid Rites and the intriguing and riveting Tevfelskvnst, band and album reinforce their already virulent animus with compelling force and charm. One thing about the album is the familiarity between groove structures and at times sound, yet they are woven into the individual characters of songs with an imaginative touch which defuses any over familiarity as strongly shown by the second of the two. The track rumbles and snarls from start to finish, the bass of van Stiphout especially inescapable bait within a torrential and impressively evolving landscape.

Completed by a powerfully enticing cover of the Death track Open Casket, the album is a formidable and thoroughly exciting proposition. Certainly it is not venturing into realms unknown but for primal yet organically inventive death metal there have been few releases better this year.