A brawling roar and intensive tapestry of the essential essences of nineties old school and modern death metal, Lunatic Confessions the debut album from German metallers Miseo, is an uncompromising fury which what it lacks in originality it makes up for with ravenous enterprise and imaginative hostility. It is a release which does not startle but easily wakens a greedy hunger to come back for more again and again.

Hailing out of Marburg, the band is made up of vocalist/guitarist Fernando Thielmann (MTGM, Carnal Ghoul), bassist André Rink, and drummer Timo Claas (Lay Down Rotten). Formed at the beginning of last year, the trio caught the imagination if arguably not the success it warranted with The Dead Will Predominate EP a few months later. Now they unleash Lunatic Confessions to evolve the promise of their first offering with a ferocious and captivating tempest of sound and intent. It is death metal without any pretensions but also a proposition unafraid to be adventurous and inventively expressive within the existing scenery of the genre.

The Blacksmith Records released incitement opens with the brief and expressive intro Trapped In Veil before exploding with the exhausting and thrilling storm of Daddy’s Girl. The track rages sonically and vocally from the start 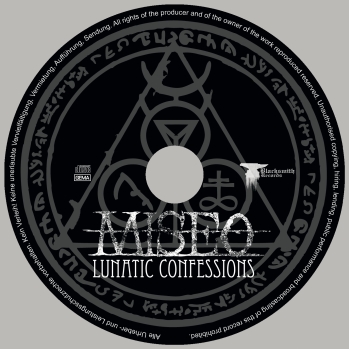 whilst riffs rub incessantly across the senses as heavy duty rhythms tenderise the same surface. It is a striking eruption of sound and intent which creatively mixes up its assault in gait and intensity, grooves and sonic intrigue as prevalent as an inescapable hostility.

Greed Kills equally takes little time to encase ears in a rigorous examination of riffs, bone splintering rhythms, and vocal animosity. The track almost has a swagger to its maliciousness and dark hearted grooving, enslaving imagination and emotions as swiftly as its predecessor. It is a cantankerous treat of an aural bullying which is then shadowed by the outstanding title track. Unrelenting repetitive grooves bind ears first before its slower roam over the senses casts imposing shadows and appetite igniting temptation. Equally impressing with its sinew sculpted malevolence which drives drums and bass especially, the song is an early best track contender. Its lingering qualities followed and matched by the inhospitable predation of Skin Dress. The track stalks the listener, twisting with spiteful grooves and uncompromising rhythmic incitement whilst vocally Thielmann and band find their most caustic malice yet. It is a bordering on hypnotic consumption of ears and another pinnacle in the increasingly impressing release.

Both Überzucht und Untergang and Harlots For God keep things tempestuous and highly satisfying, even if neither grips quite as tightly as the previous pair of songs. The first harangues ears with an insatiable fierce blaze of riffs entwined with scorching grooves caged by a rhythmic provocation which alone numbs the senses. Its successor prowls with bestial intent whilst flirting with the imagination through veins of acidic melodies and sonic seduction. Both songs spark with extreme enterprise which only incites further hunger for the release which Everybody’s Victim feeds with its erosive savagery and venomous narrative.

It is impossible not to have addictive tendencies towards Lunatic Confessions by this point, every track presenting slightly familiar but invigorating and refreshing twists to their death metal offering, as evidenced by the barbarous No Guts No Glory and its blend of fiercely nagging riffery and creative seducing seeded from melodic toxins. It is an irresistible baiting not quite matched by Five Star Doc yet the song with its haunting opening and fiendish stroll still provides a richly satisfying proposition before final track Ingrate Deadbeat uncages its own threatening maelstrom of extreme vehement and hellacious intent.

Lunatic Confessions is a blistering and thrilling encounter which offers everything good and addictive about death metal. It may not be setting new boundaries but it leaves only the thickest pleasure which is more than enough to wholeheartedly recommend Miseo’s impressive release.