Dark fires and blazing shadows: an interview with Andrew D’Cagna of Brimstone Coven 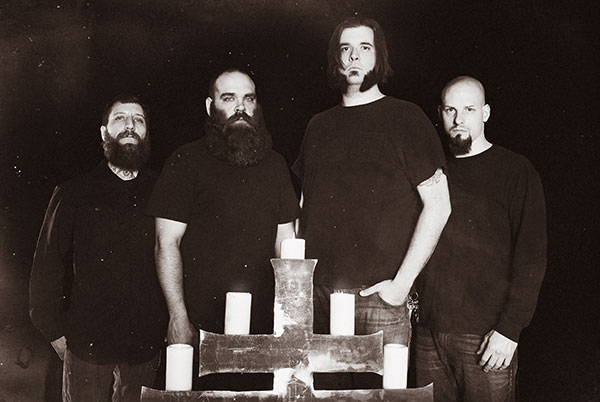 Retro heavy rock and metal is flourishing right now through a host of inventive bands and they do not come more compelling than Brimstone Coven. Offering plenty more than just retro rock and doom in their attention grabbing sound, the dark occult rock band is a proposition which roars and seduces with songs which rigorously awaken the imagination and flirt with the passions. Their signing to Metal Blade Records has brought the release of a self-titled album which brings together the band’s earlier EP and first full-length in one richly satisfying place. We set about finding more about the West Virginian band with the kind help of bassist Andrew D’Cagna who talked origins, their link up with Metal Blade, dark influences and plenty more…

Hi Andrew and welcome to the site, thanks for taking time out to talk with us.

Can you let us in on the origins of the band and how the line-up met and linked up?

Thanks for having us! We have all known each other for years and have been in different bands of various styles over those years. Corey started this project and hand-picked us as his ideal line-up for Brimstone Coven.

Is Brimstone Coven the first adventure for you all?

Was there any specific intent with the band and early songs either in sound or direction?

Yes, Corey was very specific about his vision of what he wanted this band to be. He is the primary songwriter and we normally just replicate what he plays on demo songs and refine them from there

Has that ideation evolved dramatically since or is it still the core spice to Corey and the band’s writing etc.?

Not really, the vision has always remained the same. The songs have definitely matured as one would expect but our course has been steady since day one.

There is a vibrant surge of bands re-visiting retro hard rock and doom and fusing it into their own imaginative flames of sound. Have you sensed this from in the midst of the psychedelic and occult rock scene which seems to be healthily

Yes, we are definitely not the only ones playing this type of music. The retro rock resurgence is in full swing and there are many great new bands playing old sounding music. I think it’s a much needed breath of fresh air in a scene of sterile music.

Your sound has been called ‘Vintage’. A tag which you feels suits?

Yes it definitely suits us. I would not classify us as Doom Rock, or Stoner/Fuzz. We call it Dark Occult Rock, but we are perfectly comfortable with being called Vintage Rock.

How do you see your sound predominantly differing and equally fitting in from the current doom rock landscape?

I think we are much more akin to the old psychedelic rock of the late 60s/early 70s. We are not quite as “heavy” as a lot of the bands out right now. It works to our advantage, because not being as heavy sounding opens us up to a wider audience than others.

You have just released your self-titled album, which brings your debut EP and first album II together for the first time via Metal Blade Records. Why, the certainly not unwelcome re-appearance of the previous releases in one package, rather than a new encounter with the label first of all? Just because of the lack of availability of the records from the first time around?

That was the label’s idea. We think all of that material is strong enough for the world to hear, and so did they. We are glad they made that decision, since a lot of people never got to hear our earliest material.

Are there swift plans for something new afoot you can reveal?

We are in the process of writing a new record, and to us it’s the best material to date. It sounds like the next logical step for Brimstone Coven. we cannot wait to let everyone hear it.

How do the impressive songs on the album differ to those you are writing nowadays? Is there any particular evolution in songwriting and sound for us to anticipate?

Expect more diversity, more evil and more psychedelia. If you like the material on our first two releases, we are sure you will love the new stuff. 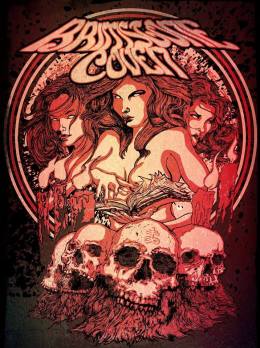 Can you give us some background to the EP and album making up the album? What was the creation and recording like at the time and in hindsight anything you wish you could hone a little more now?

It was a fun and simple process. A lot of the recording was done live, and that’s the way we prefer it. Looking back, there isn’t anything we would change about those songs or the recordings. They came out exactly as we intended.

I assume the opportunities in the creating a release with Metal Blade’s support will be a big new step for you. What are your hopes and anticipations for that experience?

We hope to reach as many new fans as possible, and so far the label has been an immense help with that. We wouldn’t be doing this interview with you right now, had it not been for Metal Blade. We are truly thankful for this opportunity.

What have the benefits been already from linking up with the label? Has it given the band a dose of wider attention just from being in their roster?

It’s been great so far. The European press has been especially kind to us.

Back to the album, have you tweaked any of the tracks on it or is it a straight transplant of the previous records?

All we did to release the songs on Metal Blade was to re-master the songs onto one recording. We also re-packaged the layout and added new artwork and photos.

How does the songwriting come about predominantly in the band, musically and lyrically?

Corey writes 99% of all the music, and we just follow his lead. There are a few new songs we have begun to collaborate on, but the songs and the feel are still the same.

Any specific inspirations which has made the biggest impact on both those aspects of the songwriting and your creative thoughts generally across the band?

We draw influence from many things. There is no shortage of themes to draw inspiration from.

The band hails from Wheeling in West Virginia. I know little to nothing about the town/city so is there a healthy music scene around the place and of metal/ heavy rock in particular?

There are a lot of great bands in our small little area. All the musicians here are very talented and bring a lot to the table. I am sure you will be hearing more great music from this area in the very near future.

How about dubious and darkly shadowed goings on there, which may have sparked some lyrical incitement?

We tend to dwell on the darker side of life when it comes to lyrics. They are mainly occult themed, but not exclusively. Anything dark and mysterious makes for good lyrical inspiration in this band.

What is next for Brimstone Coven?

Writing, recording and performing are all in the works for the future.

Once again a big thanks for bearing with our questions. Have you any last thoughts for the readers?

Thanks for having us again, it’s been a pleasure. And thanks to all our fans who support in any way they can, we love you!