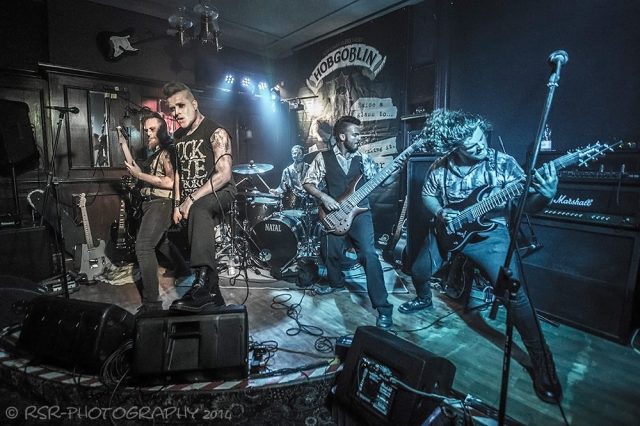 If you thought nu-metal was a redundant flavour then hold on to your floral panties boys and girls because it is not only alive and viciously kicking but it has been twisted into a whole new glorious personality by UK geniuses Anti Clone. Genius is just what the Lincolnshire quintet is for not only has the band reaped the most flavoursome and essential essences of the genre and fused them with a healthy dose of varied other spices, they have bred those inspirations and accompanying familiarities into a fresh and new dawning. It is not the forging of a brand new ground-breaking exploit but without doubt the beginnings of a template destined to spark a fire in others.

Formed in 2011, the Boston band like so many went through a tempestuous time line-up wise before the two sets of brothers in Peter (lead vocals) and Drew Moore (drums/ programming) alongside Conor (guitar) and Liam Richardson (guitar) alongside Fraser Burch (bass) came together. The band from there were soon earning a powerful reputation for their live performances and sound locally which was emulated as Anti Clone spread their musical fury across the UK starting with a tour alongside Eridium last year. Since then the band has graced stages with the likes of American Head Charge, Sworn Amongst, ESO, Maplerun, Evil Scarecrow, and Bloodshot Dawn. Following the success of debut single 1984, the band’s Matt Hyde (Machine Head, Trivium, Fightstar, As I Lay Dying and Slipknot) produced Hands Sewn Together gets its national release and it is hard to see the British metal scene being the same ever again.

It only takes the first few moments of opener Take This Pill to turn attention and imagination on their heads and lay down bait which sets the seeds to a lingering ardour soaked reaction. Coarsely surfaced riffs size up ears first; their

touch a rough rub before scythes of sonic enticement sears the senses through the guitars. With controlled yet punchy rhythms punctuating the initial lure to equally appealing success, Peter unveils his outstanding vocal expression, his deliver subsequently shown to be as inventive and varied as the sounds around him. The track continues to twist and flirt with the imagination and passions, elements of Korn making strong hints though maybe more so the song plays like a mix of Mudvayne and Fuckshovel with a rich dose of Drowning Pool incitement. That too is only a spice as Anti Clone proceeds to sculpt an antagonistic seduction which oozes originality and mouth-watering invention.

The simply outstanding start alone would be enough to wax lyrical about the promise of the band, but that potential is shown to be far more than just a future possibility by the following Here Comes The Flood. As different in character as it is similar in its creative alchemy, the second song completes the persuasion that release and band is something special. Charging from the blocks like Usain Bolt caught short, muscles and attitude bulging with every beat and note, the track is a carnivorous tempest of sinew driven temptation coursing with a (Hed) PE like anger and contagion. It is a riveting swipe at the senses which only intensifies its might and coaxing with an insatiable torrent of rhythms from Drew which in turn inspires guitars, bass, and vocals to collide in a breath-taking brawl of ingenuity. To be quite honest if there has been a better track unleashed this year it will have been something really sensational.

The furious drama of the track is equalled by that of 1984 though it comes as a more reserved proposition. The slow courting of vocals and drums stabs skirted by the excellent dark throat of the bass is another irresistible lure from the band. Behind it a seeping breath of portentous atmosphere is released but it is also a slow brew which hints and taunts before the guitars begin to stretch their presence and narrative with melodic enticing amidst a similar rising of passionate energy vocally. Eventually taking big strides rhythmically with potent hues of guitar enterprise on board, the song swells with an American Head Charge seeded adventure before repeating its magnetic sequence but with a fuller weight and evocative dexterity. Glorious in its harmonious reflection and raw in its impassioned protest, the track is a masterful.

The following System, which also features John Knight of Synaptik, makes a more controlled entrance like its predecessor but this time within an openly voracious frame of sound and intent. There is an intimidation to the track from its first breath though which ignites a sudden twist as the song escapes its compelling rein to surge with inventive nostril flaring into a riveting stomp of crusading rhythms and sonic tenacity. As all tracks it is also as unpredictable as they come, playing like an aural jigsaw which is unafraid to let its moves make rude and clunky interruptions to enhance further an already thrilling beast.

The EP ends with its most hostile offering, vocals and grooves from the first syllable and note a raw abrasion which develops its own infection soaked enticing. The Usurper is a brute of an encounter, a hostile and uncompromising protagonist which deceptively loads up with hooks and squealing grooves to seduce as it gnaws on the senses. Again it is another facet to the sound and presence of Anti Clone, no two songs on the EP sharing a whisper of ideation and undeniably none as ferocious and unrelentingly invasive as the closer.

Hands Sewn Together is pure joy, an encounter which leaves the majority of releases this year standing in its shadow whilst as declared earlier making for a standard setting proposition. Even though Anti Clone has only just started redesigning and warping British metal, it is impossible not to get truly excited about the band.

The Hands Sewn Together EP is available now @ http://www.anticlonehq.com/