Home › Music › Album › Jona Overground – On The Outside

Jona Overground – On The Outside

A persistent caress on the ears, the soulful acoustic pop of Jona Overground as vibrantly presented on their debut album On The Outside, is a proposition to warm up any thought, emotion, or day. Presenting ten easy going yet elegantly crafted and persuasive songs, the release makes no demands yet provides a tender persuasion of memorable and lingering propositions which melt the senses.

Formed in 2011, Jona Overground is the creation of vocalist Ann-Marie Gilkes, who has worked with the likes of Erasure, Kylie Minogue, Lionel Richie, and Tricky, and guitarist/keyboardist Jon Griffin. Meeting whilst studying music at Goldsmiths College, the pair began writing together after discovering a mutual love of classic pop, with the creation of the band coming soon after. Establishing a potent reputation on the live scene around London and the South East, the duo linked up with producer Alexander Mayor to work on their debut release, the impressive IRL Records released On the Outside.

Opener If You Were Free sets the tone of the album right away, warmly coaxing chords of guitar courted by firm if unadventurous beats styling a canvas to which Gilkes paints intimate narratives with her potent tones and delightful 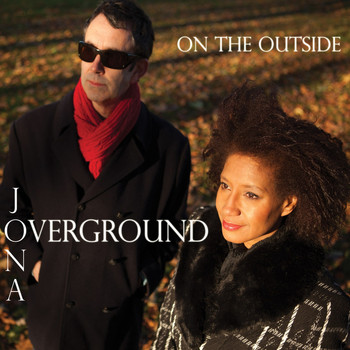 expression. There is much more to this and the other songs of course but it is a magnetic undercoat which leads to brighter enchantment. With the leaner backing vocals of Griffin skirting his tantalising guitar prowess whilst seducing harmonies break free throughout, the song swings and sway with a gentle but forceful enticement, making for an attention awakening and ear pleasing start to the release.

The following Spin Cycle sidles up to the senses with a sultry climate and dark seduction next; its majestic melodic curves from the start reminding of Burt Bacharach composed musical shadows, and more specifically at times the song Walk On By. With a glowing shimmer of keys leading to evocative flames of melodies around the emotive lyrical expression, the song continues the impressive beginnings of the album before moving on to be replaced by the intimacy of Last Time I Saw You. Though the song does not grip as its predecessors, ears and thoughts are still captivated by the enticing melody seeping from the guitar and the glorious heat of classically bred stringed suasion which immerses the imagination. A track which impresses further with time, it adds another potent hue to the body of the release, as does the next up title track. A song which from a powerful first meeting also increases its lure which each involvement, it parades a joyful stride and vibrant energy in creating an increasing infectiousness whilst keys add their individual colour to meet the ever agreeable vocals and harmonies of Gilkes. It marks the pinnacle of the album, a plateau which embraces its successor too. Caught In A Line is a ballad which lies close to ears and emotions, its repetitive harmonies and evocative incitement of keys mesmeric whilst Gilkes smothers the senses in her intimate vocal beauty. That alone is enough to delight an already contented appetite but it is the rub of strings and keyboard additives which add unpredictable intrigue to the tale to turn a great song into something which sticks in thoughts long term.

Both the smiling gait of Let’s Pretend and the darker throatier breath of When Sorrows End keep the highs coming, the first a slice of reined in pop revelry which is still allowed to swish its melodic skirt in seductive fashion and the second a glorious embrace of deeper toned sounds and encroaching shadows which flirt with and kiss the senses from start to finish. The best track on the release, the song is an imposing beauty and quite irresistible.

My Word, Your World is a provocative call for feet and emotions next, its again heavier emotive premise still an easy bait to dance floors before the similarly flavoursome revelry of Time For Games parades its summery festivity. Employing a duet between the melodious temptation of Gilkes and the down to earth tones of Griffin, it is a song which takes a little time to acclimatise to but soon has body and soul locked into its flirty waltz of sound.

The album is brought to a close by the more than decent Fallout, though its balladry lacks the spark of certainly the previous track. It still makes for a satisfying close to a thoroughly enjoyable romance of melodic pop in its most relaxed and refreshing state. On The Outside leaves contentment and a hunger for more in its wake, and that is more than enough to light up dark days and uncertain nights.