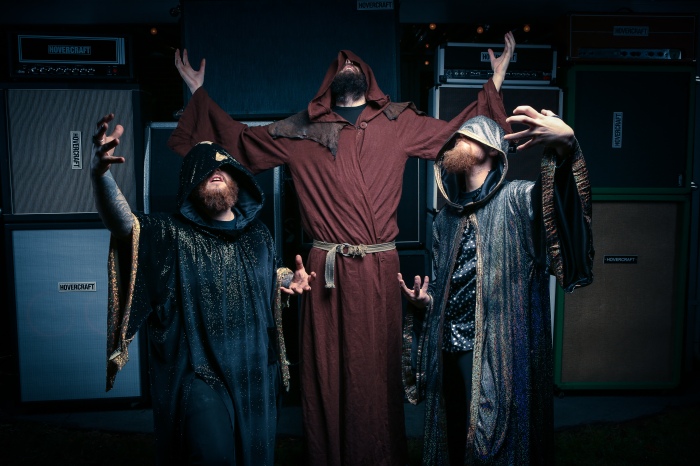 A year ago Oregon metallers Blackwitch Pudding released debut album Taste The Pudding, a collection of tracks which the trio of Wizards ‘took back stole and diluted their invention’. The story goes for newcomers to the Portland band, is that for 600 years Blackwitch Pudding has been “conjuring evil riffs, casting spells and wreaking supernatural havoc upon this planet” only to have mortals steal their creativity for their own success. That is the short version of the tale behind the presence of the band and their striking releases which take existing songs and turn them into the beasts they feel they were meant to be. You cannot call their tongue in cheek exploits the work of a cover band because of the whole new character and twisted invention they evolve songs with as well as the new warped lyrical adventures each comes with. Simply they take an established canvas and build a new ravenous predation of doom speared with caustic stoner grooves, biting hooks, and narratives of sex, drugs, and witch bred salaciousness. Now the band has unearthed the Covered In Pudding Vol. 1 EP and another quartet of singularly compelling and questionably sinful exploits.

Opening track Night Of The Blackwitch, stemming from Roky Erickson‘s Night of the Vampire, is a dank and pestilential crawl over the senses, riffs moving with erosive rapaciousness and rhythms with a military bearing which is as deceitful as the hypnotic seduction within their malevolent intent. Psychedelically enhanced and insidiously aired lyrically and sonically, the song makes for a black soaked night of incitement complete with the rawest vocals to be found still churning syllables in a graveyard. It is doom with a ridiculously enticing core which overpowers the mischievous intent to its sculpting and devilry.

The following and irresistible Toke’n Man is equally as lumbering in its primal filth clad predation as it ‘steals’ back the essence of Rush track Working Man. You can almost taste the fumes of its hazy breath and addled imagination as

the track seeps relentlessly over senses and imagination. Riffs make for the darkest web whilst rhythms again have a controlled frame to their corruptive endeavour but it is the bass stalked grooves and vocal recruitment of the band which makes the strongest toxic persuasion.

Kiss lose their anthem God Of Thunder to the threesome next as they unleash Gods Of Grungus and its bar room brawl of liquor soaked ferocity and devilment. Whereas the first two songs had a laid back senses consuming gait, the third track sees the band break into what can best be called a limping swagger with is muscles swinging lethargically and an energy keen to riot yet not too far away from the next swig of alcoholic poison. It like its predecessors is a magnetic treat to make you forget the source of their birth, each track so far improving on the original canvases.

Bong Hits and Lust completes the EP with an eleven minute epic doom transformation of Diamonds And Rust of Joan Baez and Judas Priest fame. It is a rabid and vicious slab of slow ear entwining doom revelry which exposes more of the undoubted skill and craft of the band members and of course their cauldron of possessed diablerie.

To be honest it is hard to know how to take the EP and album before it. Certainly it is a thoroughly enjoyable and accomplished encounter to easily recommend indulging in, but something inside for all the work and enterprise the band puts into each track wants Blackwitch Pudding to confront with something completely of their own…though maybe they already do that in another guise?

The self –released Covered In Pudding Vol. 1 is available now digitally and on 200 limited-edition, wizard-conjured cassettes @ http://blackwitchpudding.bandcamp.com/