Mischievous, unpredictable, and relentlessly adventurous, Brand New Silhouettes is a debut which swiftly sets its creators apart from the crowd. The first album from US indie rock pop band Body Futures, the scintillating encounter is a delightfully warped and devilishly captivating collection of songs which seduce the imagination with the creative innocence of the playground and the adventurous revelry of illicit moments behind the school bike shed. To that there is a captivating mix of feverish ideation and exploratory maturity which turns every track into a unique emprise of ingenuity. The album is simply glorious which is destined to head best album lists and make the Wisconsin band one of your new best friends and lustful obsessions.

Formed in 2012, Body Futures took their time before stepping into a spotlight, taking their first year writing and rehearsing before making a live debut in 2013. Consisting of vocalist Dixie Jacobs (ex- White, Wrench, Conservatory), guitarist/vocalist Christopher Maury (ex-Five Mod Four), bassist/vocalist Michael Wojtasiak (ex-Everybody at Midnight), and vocalist/drummer D.J. Hostettler (ex- IfIHadAHiFi), Body Futures linked up with Latest Flame Records before entering Howl Street Studios to record their album with Shane Hochstetler earlier this year. What has emerged is one of the most riveting and exciting introductions to a band in a long time, certainly in the realms of indie and pop rock.

The Milwaukee quartet instantly engage ears and thoughts with opener Hooks & Eyes, the harmonically aflame vocals of Jacobs a vibrant caress to which the more unbalanced expressive tones of Hostettler bring a delicious almost crazed accompaniment. Rhythms jab within the appealing blend whist riffs carry a jagged attitude and the bass a darker throat to the enticement. It is not the most startling song to leap at the senses but a vivacious start to the album with its Weezer like festivity and slightly frenzied vocal glow which reminds of eighties band Girls At their Best.

Things move up another step with the following When You Had A Jaw and even further with A Complete Divorce straight after. The first of the pair with its great mix of male and female led vocals again carries that eighties essence, 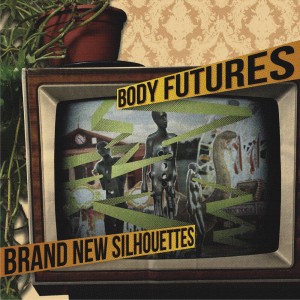 the same band as reminded of in its predecessor coming to thoughts as well as fellow US band Late Cambrian. The bouncy chorus and anthemic call of the song makes for a ridiculously catchy tempting but the band mingles it with a muddled flame of sonic agitation and atmospheric intrigue which turns the track into a whole other type of creative bedlam before closing out on the irresistible romp which set it off. It is a clever piece of songwriting and sonic incitement but soon left in the shadow of its successor. The third song starts with Jacobs alone, voice revealing more of its depths before being paced by the absorbing tones of Wojtasiak’s bass and subsequently an evocative glaze of guitar. The track is a ‘regular’ proposition initially but soon blessed by shards of discord kissed guitar resonance and a delicious flow of vocal harmonies. Thoughts of The Passions and Jingo come to the fore here, the latter the one band which most comes close to the inventive majesty of Body Futures.

From the first big peak of the album, the band dances with ears and passions through the feisty beauty of That’s So Church, its enthralling swing of hooks and beats as gripping as the mouth-watering vocals. By now you expect a little of the unexpected and the track certainly offers that with a closing discord lilted twist of inventive drama before making way for the more reserved melodic caress of Is The Skeleton A Weapon? The song smoulders and moves engagingly with a sixties teasing pop charm but along rails of sonic causticity which adds that perpetual tinge of surprise which roams the release. Not the strongest of the songs on the album but one to lick lips over all the same, it is followed by (That’s A) Big Smile (for Someone About to Drown) and its starting blaze of Sex Pistols seeded guitar and riffery. The track proceeds to jangle and rile up the passions with clashing but beautifully merged punk spiced vocals, predatory rabidity, and the melodic resourcefulness of Jacobs’ synth and autoharp prowess and of course her mesmeric vocals. Imagine Devo meets Morningwood and you get the gist of the beauty of the song which triggers another ascent in the album’s exploration and might.

The opening ‘Psycho Killer’ like lure of bass which opens up Save the Clock Tower is potent bait alone but with the military seeded rhythms and stabbing riffing soon courting the magnetic web being cast, the track is soon in irresistible control. Jacobs walks alone through it all, her voice and keys seducing from within the compelling trap like a solitary figure in the midst of an addictive alchemy, but she is really the puppeteer urging and pulling the listener into the concussive and at time disorientating maelstrom of sound and invention. It is a stunning track which is swiftly equalled by the similarly beautifully deranged fascination of Phantom Patterns Arson. Running with a pop punk energy and virulence, the track is as jagged and irritable as it is melodically rampant, vocals and keys a relentless temptation within the more antagonistically captivating web of rhythms and guitar endeavour.

Sha Na Na: Clone Project Alpha is a song about Elmer Edward Solly, an escaped convict who masqueraded as a dead member of Sha Na Na, and just as frantically warped as the other pinnacles of the album. Lurching around with the will and intensity of a Dervish yet still making time to smooch with ears through melodic fondling, the song is impossibly infectious and unique, a track to rival Save the Clock Tower though both have to bow to What Bugs Eat. The penultimate song of the album, it is an immediately challenging fusion of two extremes which simply thrills. On one side there is the vocal pop toxicity of Jacobs alongside acidic yet warming melodies and on the other, a caustic discord spawned rapacity of sound which breeds hooks and riffs which scamper over the senses with the irritancy of a thousand insects. It is a simply bewildering and brilliant union as the sides merge in a bedlam of enterprise and ingenuity

The album finishes on the thick and rich psychedelic sunset of The Spanish of Scraping, a track with a sultry air but unafraid to interrupt with moments of poetic lunacy. It is an outstanding end to a quite brilliant album, Brand New Silhouettes destined to be a marker for indie rock and pop to come you sense as it twists its mischief through ears.

Though not in sound, there is one band which Body Futures reminds of in unique invention and the distinctness of the sounds they can conjure, and that is Talking Heads and we all know what happened to them.