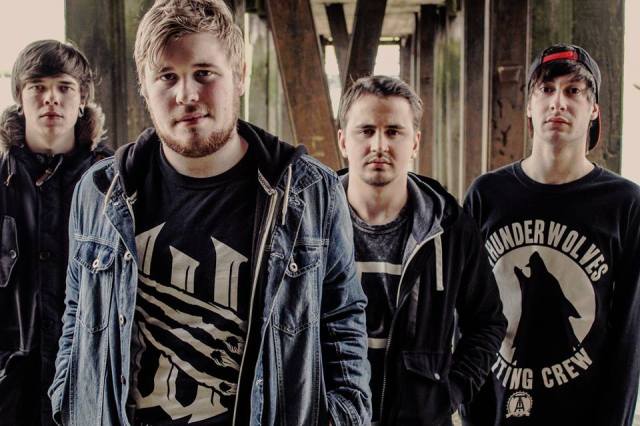 FROM HER EYES HAVE THEIR EXPLOSIVE DEBUT EP NATIONALLY RELEASED!

Up-and-comers ‘From Her Eyes’ are poised for a brisk climb with the national release of their rousing debut record ‘Demons’, which hits outlets on Monday 25th August.

Born in 2012 and hailing from Bridgend, Wales, ‘From Her Eyes’ carry the potential to follow in the footsteps of fellow home-towners ‘Funeral For A Friend’ and ‘Bullet For My Valentine’. Consisting of old school friends Tom Owen (Vocals), James Kearle (Guitar), Jesse Simmonds (Bass) and Gary Holley (Drums), the metalcore quartet have a formidable and mature sound that certainly defies the fact that they are all just out of their late teens.

By drawing power from the Architects, While She Sleeps, Devil Sold His Soul and post-rock heroes, Touche Amore, the band has cultivated a sound that is direct, hard-hitting, and all consuming.

Despite their lean years, the band have been actively hitting the road since the end of 2012, and during this time have chalked up a plethora of fiery live shows, including igniting stages whilst supporting the likes of With One Last Breath, Red Seas Fire, Continents, When We Were Wolves, Set to Break and Reaper in Sicily. After winning souls with their live set, the post-hardcore seeded band soon turned their attention to their first record, and earlier this year bunkered down at Bandit Studios with Jonny Renshaw (Devil Sold His Soul) to record their forthcoming new EP ‘Demons’; the resulting fury nothing short of breathtaking.

‘Demons’ starts off with the hypnotic and atmospheric ‘Decay’, which lulls you into a faux state of calm before the monstrous ‘Comatose’ hits you right between the eyes. The juggernaut groove of ‘Porcelain’ also works its way into your grey matter with devastating conviction, while the fantastically frantic ‘Disillusionist’ further displays the band’s arsenal of hefty riffs at their disposal. The haunting ‘Elsyuim’ is next and it highlights the combo’s impressive maturity and guile. Finally, the EP’s namesake ‘Demons’ completes the record, crowning a striking piece of work that proves the rising riff tyrants are ripe for national recognition.