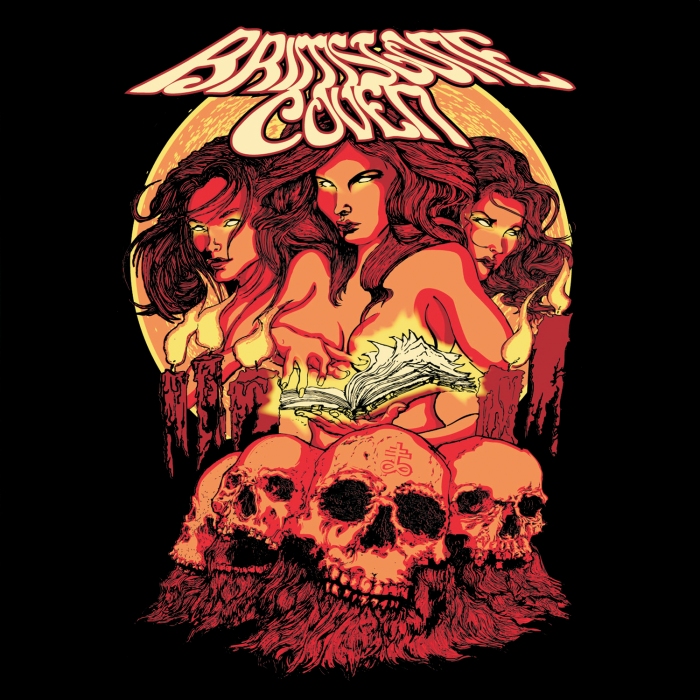 Psychedelically distilled, the dark occult rock fusion of retro-hard rock and doom which is cast by US band Brimstone Coven is a flight of nostalgia and modern enterprise rolled into one fiery proposition. As openly evidenced by their new self-titled album, it is a sound and incitement which roars and seduces with its sounds but also ebb and flows in strength and persuasion at times, especially if there is no dormant passion and appetite for the genre they explore within their recipient. Yet it is only fair to say even with that obstacle before it, the release makes for a compelling and often rigorously captivating offering which awakens the imagination and flirts with the passions.

The album sees the uniting of second release II and a preceding self-titled EP/album from the West Virginian band which began in 2011 with guitarist Corey Roth, who subsequently brought vocalist “Big John” Williams, bassist Andrew D’Cagna, and drummer Justin Wood into the project; the latter replaced by Dan Hercules until his more recent return. The success of the band’s live presence and their first two releases, led to them signing with Metal Blade Records at the tail of last year going into this. The new unleashing gives their previous encounters a combined and wider canvas to enthral from and it is fair to say that the album does that with consummate ease.

The thumping beats opening up first track Cosmic Communion instantly ensures attention and appetite is rigorously awoken, its instinctive raps swiftly joined by flames of guitar and the potent melodic voice of Williams. It is a strong coaxing which finds a potent vein of magnetism with swinging grooves and sonic weaves of flavoursome enterprise over which group harmonies also impress. The song is soon casting a revelry which is as potent urgently shifting its feet or making a more sultry seduction, each leaving ears and emotions fully engaged. Thoughts of Pentagram and Orange Goblin come to mind in varying degrees as the track makes an invigorating start to the release. Its success is not quite matched by the moodier Behold, the Anunnaki, its air and attitude a darker presence to the more celebratory essence of its predecessor. The bass instantly catches the ear, its heavy shadowed tones even more pronounced and intrigue ridden than in the first song, whilst the excellent vocals again smoulder and soar enjoyably singularly and as a group, bringing an Alice In Chains essence to the narrative and feel of the song. A repetitive prowl of bass and aligning riffs equally makes a rich lure to the track which though definitely lacking the spark of the first, still leaves a contented feeling behind.

The Black Door pushes emotions and pleasure back up to that early plateau with its sinister yet absorbing beauty. Grooves and melodic hooks litter the mesmeric landscape of the song, its paths of again throaty basslines and more monotone kissed vocal enticing just as irresistible as those more openly grabbing lures. It is the best track on the album by far, everything about its invention and body dangerously seductive and hypnotically imposing, like an occult themed episode of seventies TV show Hammer House of Horror. The album never quite repeats the song’s glory again though the likes of the sultry Blood On The Wall and The Grave with its ravenous enticement as well as the slowly crawling Lord & Master give plenty to contemplate and striking rewards in. The second of the trio especially ignites a fresh hunger, its rawer and vivacious stoner lit textures a healthily appetising provocation to which blazes of guitar imagination and sonic rapacity flirt evocatively, whilst its successor is a slow burning tempting which grows and enslaves emotions over time with raw elegance and dramatic sonic poetry leading to a blaze of a finale.

The addictive almost predatory riffing which is soon in place through Vying makes for another inescapable baiting, though the song never manages to quite breed the same depth of potency through the rest of its accomplished ideation and craft. Again though it is a song which leaves a lingering thread of allurement which draws you back into its resourceful grasp, something The Séance is less successful in creating despite its presence making for a pleasing if quite quickly forgotten encounter, especially with the intensive weight and atmosphere of The Folly of Faust coming soon after, its thick smothering air a tempestuous spark to the imagination.

The remainder of the album is made up by Brimstone Coven’s first release, a heavier and darker toned collection of songs thanks to their raw recordings and production, but also tracks which just do not have the same spark and life as those before them. It is easy to see why that first EP drew strong attention though with tracks like We Are Forever with its smoky blues atmosphere and the more classic metal hued The Ancients showing all the potential exploited better in the following album. With Son of the Morning making the most potent impression of the remaining songs, the whole album is a fascinating proposition, a journey back to previous eras but finding plenty to awaken a modern palate, even those with a less keen appetite for those older times.

Brimstone Coven has the potential to make a major statement ahead taking their album as suggestive evidence, its persistently convincing presence increasingly persuasive as it immerses ears and thoughts.