Home › Interviews › Warm crypts and sizzling corpses: an interview with Norm Elliot of Norm And The Nightmarez

Warm crypts and sizzling corpses: an interview with Norm Elliot of Norm And The Nightmarez

Wickedly contagious and a diversely warped fusion or rockabilly and psychobilly at its most incendiary best, Psychobilly Infection the debut album from Norm & The Nightmarez is one of those standard forging releases which breeds inspiration and exhilaration. Thirteen tracks of intrigue lit and passion drenched rock ‘n’ roll, the album is a storm of rapacious creativity flourishing in decades of influences and twisting them in something new and template casting. The band is the creation of vocalist/guitarist Norm Elliot, already renown with Mickey & The Mutants and their impressive first release last year. Norm & The Nightmarez is a new kind of a riveting beast and we seized on the chance to find out more when Norm kindly spared his time to let us explore his history, the album, psychobilly and much more…

Hi Norm and many thanks for sharing your time with us.

Before we talk about Norm And The Nightmarez and debut album Psychobilly Infection, tell us about yourself and your musical history up to previous band Mickey And The Mutants.

Hi Pete … I was born in Northern Ireland, to escape the troubles we moved to Birmingham England when I was 4. I’ve been here ever since. I picked up a guitar when I was 13 and found I could play it quite easily, it was the 1st thing that actually made sense to me, school just went over my head and bored the shite outta me. I joined a R’n’R band after 2 weeks of playing, then developed into Rockabilly and then I discovered The Meteors and my life changed forever. I formed a psychobilly trio called the Phantom Zone, we were OK and supported all the new upcoming bands including The Guana Batz, The Stingrays, and The Vibes. I then travelled the world for years just playing my acoustic around bars developing my writing skills on the way.

Has rockabilly/psychobilly always been the main source of your strongest musical pleasure personally and creatively?

You have seen and been involved in numerous decades of the psychobilly scene here in the UK, would you say it’s in one of its healthiest moments right now?

I was there very near the beginning, then as I say travelled the world, it’s amazing to see how big it’s become again. Its healthier than ever and an amazing scene to be involved in, full respect to those that kept playing, they saved the music I love and I thank each & every one of them for that. Also people like The Bedlam Crew and Little Jo, her MySpace was one of the 1st psycho related sites I came across and I’m sure that played a huge part of the returning scene.

We mentioned Mickey And The Mutants, how did the link up with ex-Meteors/ex-Guana Batz bassist Mick White and Sharks drummer Paul ‘Hodge’ Leigh come about?

I was in my own Crampish Garage band called The Bionic Krugerrands and Mick liked what we did, and my guitar style so asked me to join him. I said no many times but then my drummer left and as I was at a loose end I caved in, I’m glad I did. Then the drummer he had left and we found Hodge, simple as that really.

I may be wrong but I get the impression that you are happier and more fired up creating and driving your own bands than playing in other’s projects, though I hasten to say that your own penned songs and vocals on the MATM album Touch The Madness do not suggest that to be fair.

No, you’re correct, I love to create and have a deep passion for what I do and after 37 years of creating music in one form or another I know how it works so understand the process and what to do to get the best out of it. It was fine working 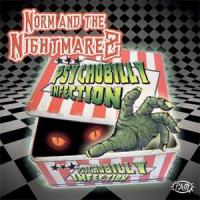 with Mick and he was kind enough to listen to my input, and you know what? We made one hell of an album Hodge, Mick ‘n’ Me and I’ll always be proud of it.

What are your strongest inspirations would you say in sound and your guitar style?

Artists: Most of the Sun Rockabilly’s and various Rockabilly and Psychobilly over the years.

Norm And The Nightmarez has just released its first album, the undeniably brilliant Psychobilly Infection. There seems to have immediately spread a swift and lively buzz about the band and release. Would you say this has been the most dramatic impact a band or release you have been involved in has made?

HELL YES !!! But as soon as we heard the album mixed, myself and Alan Wilson knew we had created something special. That’s from a punters point of view not from an arrogant stance. I’m thrilled with the way it turned out!.

Did you have any expectations or hopes beyond simply having people like it once it had emerged in the studio?

Oh Yes, I want to play this devils music all over the world as much as possible, I’m never happier then when I’m onstage doing this material, it honestly sends me wild, sometimes I have to rein myself in a bit for fear of injury ! Whatever you see me do onstage is from the heart, nothing is staged or acted, any scream, any grimace any movement, it just gets into my bones and transports me to a place I love to be.

You seem to have found the perfect blend of rockabilly and psychobilly on the album, both teasing and seducing without overpowering the other. Has this been an instinctive and natural find or something you have cultivated over time?

I get the impression that the band is very new as a presence; is that the reality and were the songs on the album bred after its emergence or do some have a longer history to them?

I just sat down over a weekend and wrote the songs as I always do, on my own with my acoustic. A few were already in existence but most totally new. I think I’ve had Sex Kitten for about 30 years but never used it till now.

How did you meet drummer Frank Creamer and bassist Mark Bending and how easy was it to get them on board for the album?

Frank Creamer was briefly around in the late part of the early days so I kinda knew him a little from then and I got Mark Bending from an advert I placed.

I am right in believing the band has a different line-up for live shows now?

Yes you are, I have a very talented young buck called Jake Lyon on drums, he has a degree in music and filled in with the Mutants on a couple of gigs, I’ve honestly never worked with such a gifted live drummer. John Goodey is on double bass, he’s been in rockin’ bands for the past 30 years plus and is an awesome double bass player.

Tell us about the recording of Psychobilly Infection, was it all smooth sailing?

I honestly can’t remember much about it, it went by in a flash and as ever recording with Alan Wilson was really pressure free. I did the ground work and preparation before I went in and as a trio we practiced hard for it. We did have one hiccup as the bass player’s bass wasn’t up to it and Alan wanted to make it special so Steve Whitehouse put his underpants on over his jeans and saved the day by driving his own personal bass over for us to use in a super hero styleeee.

Any tales you can tell us from that time, any solicitous meetings or the occasional salacious summoning? 😉

Yeah, there were the 9 prostitutes, two if which were lady boys (I can’t tell you who had them ) and the mountain of coke night !!!. Nah, only kidding, all quite boring really we just concentrated on getting it bang on, capturing the threat and suspense we wanted to create. Early nights and Earl Grey!!!.

Is there a particular moment or aspect to the album which gives you the biggest chill and tingle of satisfaction and pleasure?

It all gives me a tingle I just honestly cannot believe how amazing it’s turned out, though if I’ve got to pick one moment it’s at the end of the 2nd lead break in the song Psychobilly Infection just before I start to sing, it’s like a Buddy Holly dum dad dum da dum, dum dum, it just moved me and I get a thrill now every time I do that bit live, its ace.

What is on the near horizon of Norm And The Nightmarez? 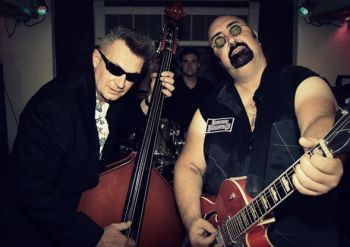 The Beldam Breakout festival in September & a lot of gigs booked, to be honest amazing stuff is coming in daily but we’re up for anything and just wanna get out there both in the UK and around the world and play, play, play.

Thanks again for talking with us, any final thoughts to leave us pondering?

Norm & the Nightmarez are here to stay, come to a show and see for yourselves … come get the PSYCHOBILLY INFECTION !!!.

And finally tell us five of the most important or simply thrilling releases which have had a part in your evolution as a musician and songwriter.

In Heaven – The Meteors