Like a potent book you cannot put down, there is a magnetism and intensive lure to Vremya borby, the new album from Russian folk metallers Bastion, which is inescapable. Severely rugged and antagonistically muscular yet melodically mesmeric, the second album from the band is a striking and commanding enticement, folk metal at its instinctively formidable best.

Formed in 2002, Bastion began with a sound bred from heavy and power metal influences but through several line-up changes before and after, as well as natural evolution, their sound found its home in Pagan/Folk metal inspired by the ‘struggle for the revival of Pagan Ideology and Traditions of their Nation’. 2007 saw the release of the demo Remembering the Past but it was debut album The Dawn of Svarog in 2011 which awoken a richer attention upon the band. Before its release, Bastion was already looking ahead to its successor, working on its visual design with Peter Podkolzin before in the following year, laying down the drums for the next encounter. Created over two years, Vremya borby, translated as ‘The time to struggle’, was completed and unleashed to show a new intensity and aggressive to the Krasnoznamensk sextet’s sound in which they thrillingly employ an enthralling mix of varied folk flavours and instruments.

Released via Der Schwarze Tod, the album immediately makes an intensive impression with an attention grabbing flow of rhythms and a subsequent squall of riffs and sonic rapacity as opener Arkona 1168 consumes ears. It is a formidable and thick web of sound which alone potently coaxes but once the folk spawned melodies of pipes add their temptation, the track elevates to an even greater enticement. Riffs and rhythms continue to badger the senses, at times leaning intensely upon them and in other spaces pummelling their surface as the urgency and aggressive intent of the song continues to show its sinews and ferocity. The vocals make for an intriguing and pleasing aspect too, their raw and gruff attack at odds with the melodic side of the song whilst aligning to the hostile roar elsewhere but they make the perfect fit within the riveting mesh.

The title track steps up next with a similar intent and structure but a mellower tone within a still rabid tempest of attitude and sound. As it evolves the track spreads a distinctly different and adventurous charm to its predecessor, melodies 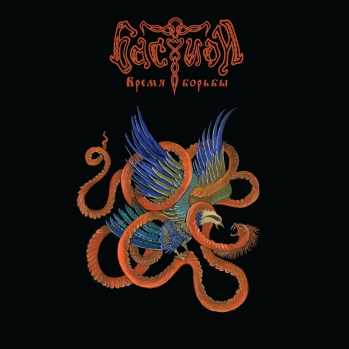 and hooks an insatiable tempting within a restrained but keenly intrusive charge of sound. As all tracks it provides an adventure which is a tale of its own and even though the narrative is sung in Russian the imagination is pressed into shaping its own visions and interpretations. With a sonic invention and swirling acidic endeavour, the track soars and incites emotions with ease for another impressive step in the landscape of the album, one soon taken up another level by the pair of Zavety (Behest) and Boevaya (War Song). The first of the two is part stalking predator and part rabid horde as it surges upon ears and thoughts. Its body is never an outright fury or assault but certainly one which intimidates with instinctive predation, even as the delicious web of traditional folk wood instruments colour the imposing shadows of the song. It is a stirring encounter with the throaty bass prowess especially thrilling though it is soon left slightly in the shade of its successor. The second of the two calls with citric pipes initially before immersing in a thunderous charge of riffs and rhythms ridden by the lordly and raucous vocals. It is an enthralling call to arms, muscles clashing in the air as a melodic seduction, especially from keys and horns, brings hope fuelled hues and dawns to the building hostility as it thrusts thoughts right in the midst of sweat soaked, dirt clad warrior bonding.

The albums best track is followed by Moya Zemlya (My Land) which has the unenviable of trying to compete with its predecessor. Rawer and dirtier than the previous song, and even more hostile, the track rummages through the senses with a malicious vocal and caustic sonic voracity. It is a destructive engagement until the moment the song reins in its spite for another absorbing evocative passage of melodic imagination and emotion which in turn inflames the potency of the returning tenacious fury of the track. Though it does not manage to match earlier songs, it is a compelling and ravenous provocation which is soon a distant memory once the might of Bylina takes over. Though the group vocals with their tribal discord labour in their convincing the torrential and unrelenting nagging of riffs and punchy rhythms seduce ears and emotions with sublime ease. It is a lure which only tightens its grip as pipes dance and flirt with their rich tapestry of expression and sound over the merciless and scintillating surging of riffs and rhythms.

The album closes with V pesnyah dedov (In Songs Ancestors), an eleven minute epic which scars and seduces, ravishes and entices across its evolving soundscape of sound and lyrical emprise. It is a fine conclusion to an excellent release which has everything you wish from a folk metal release and more in a masterfully unrefined and honest encounter. Bastion is without doubt a band to take notice of.