With their new album our introduction to King of Asgard, expectations of Karg were bred from the influence and suggestion of others. The band’s third album follows the widely acclaimed debut Fi’mbulvintr of 2010 and the similarly well-received …to North two years later. The former especially is mentioned in lustful voices so hopes and anticipation for the bands new full-length was keenly high. What emerged is a release which initially did not completely convince. Certainly the band’s raw blackened death metal impressed in weight, craft, and malevolence yet it lay relatively dormant in the passions. As with all releases though the first couple of ventures were mere suggestions and subsequent listens began revealing a much broader and inventive proposition. It would be wrong to say that the album has managed to light a fire in our imagination and passions yet but it has become one tenaciously compelling protagonist over time. How it sits against the previous King of Asgard albums we will have to let others say for now but Karg is definitely an album worth a decent perusal.

The Swedish band was formed in 2008 by vocalist/guitarist Karl Beckman alongside drummer Karsten Larsson, the pair having played together in Viking metallers Mithotyn. Drawing on Norse heritage lyrically, the band released the demo Prince of Märings in 2009 before being joined that same year by bassist Jonas Albrektsson, once of Thy Primordial. The demo drew strong attention from labels and by the December of the same year King of Asgard has signed with Metal Blade Records. Fi’mbulvintr caused a big stir in the metal scene with its release the following year. Recorded with Andy LaRocque, as both the subsequent albums, it strongly thrust the band onto the folk/extreme metal map. Second guitarist Lars Tängmark was then recruited as the band hit the live side of things across 2010/11 before the band settled down to work on and create sophomore album …to North.

The dark and harshly lit soundscape of Karg is the next confrontation for ears and emotions from the band, its title meaning barren in English which is a perfect description of the stark atmosphere it carries, and to be honest of that first initial persuasion. As with all things closer inspection reveals creative nooks and crannies though; the unpredictable elements which breathe and tempt below the surface, and it is undeniable that Karg has a wealth of those lures.

The distant portentous storm of what feels like a brewing battle front makes way for the wonderfully nagging riffery of The Runes of Hel, the guitars calling invitingly from within the still rumbling scenery. Swiftly rampant rhythms are 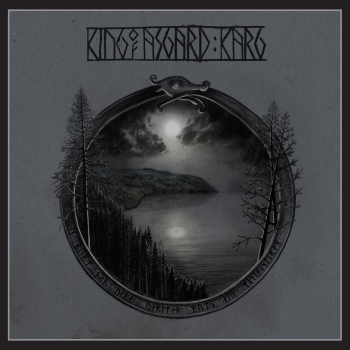 in league with the inciting guitars, as are soon after the gravelly growls of Beckman. There is virulence to the eventual charge of the track which has attention and appetite recruited keenly, more so as it expands its creative and lyrical narrative. Persistently guided by that niggle of a toxic groove which set it in motion, the track continues to enthral and impress with its at times subtle twists and caustic melodies within the overall intimidation of the song, making for an open attraction to greedily devour.

It is a mighty start which has hopes licking their lips for what is to follow. The Trickster comes next, striding in on imposing riffs to which shards of sonic enticement blazes. It is a magnetic entrance, especially with the group vocal calls, but despite prowling energetically loses its impetus. The grooving lures and crisp rhythms make a forcible draw whilst riffs and vocals roar pleasingly but the track feeds more than defies expectations, missing the inventive colouring of its predecessor. There are engaging twists within it to keep interest and satisfaction high though and make it an encounter you want to explore more, just like its successor Highland Rebellion. Aggression and antagonism is high from its first breath, the call to arms rhythmically and in atmosphere a potent coaxing within and around the menacing textures and attitude of the track. Again though, it lacks the spark to ignite the passions which disappoints, even if ears and imagination are admittedly quite content.

Remnant of the Past marks a shift in the strength of the album, the track returning its appeal to the levels of the first track with adventure and raw enterprise. Its coarse wind of riffs and punchy rhythms makes an intriguing beckoning but it is when the storm drops and the bass takes centre stage with its sinister tone as Beckman’s equally noir lilted vocals snarl out the lyrical bait, that there is a new potency to track and release. The song continues to stalk ears with roaming riffs and concussive rhythms but reined in by that threatening air. The song persistently surprises to incite a new hunger for the release, its winding melodic tempting and group vocals adding extra taste to the richly appetising proposition. It is soon left in the shade of the outstanding Omma though. From an elegant piano crafted caress the track builds a brooding dusty squall of sonic and rhythmic intimidation. It is not hostile but certainly warlike which is accentuated by the great vocal drone which comes in, its primal chant like a meditative tribal coming together in preparation for battle. That intensity erupts with warring rhythms and vocal causticity but bound again by delicious melodic straps of enterprise and emotively atmospheric textures. Ultimately barbarous in its intent there is also a seduction to the song which leaves thoughts and passions basking.

Both The Heritage Throne and Huldran keep things at a heightened level, the first especially contagious in its creative suasion. The track strolls in with rhythmic muscles poised and confident swaggering riffs. The bass finds a gutsier growl too which only adds to the captivating and bruising rapacity of the song. It is another track unafraid to explore different avenues, arguably too few of the songs doing so upon Karg. With slow moves into clean harmonies over melodic respites and equally restrained crawls of heavy weight predation veined by majestic sonic hues, the song is an enthralling offering. Its successor is pure vitriol in sound and presence, a furious rabidity but veined by irresistible grooves and intrigue clad ideation. Many of the songs on the album are slow burners in persuasion, this more than most but it evolves into one of the most eagerly digested incitements over time.

The album is concluded by firstly Rising, a brutally imposing and exciting encounter which also takes time to permeate thoughts and feelings but does so with a tenacity and tempest of sound and imagination which leads to a stealing of full praise, and lastly a brilliant cover of Bathory’s Total Destruction. I know this will upset a great many but with its punk/thrash fuel and urgency, and outright inhospitable infectiousness, the track takes the original to another level and along with Omma is the pinnacle of the album.

Karg has still not lit a fire in the belly but with each and every listen just grows and brings a stronger persuading and is easy to whole heartedly recommend.

Like Loading...
‹ That Massive Bereavement – Sugar for the Masses
The essence of greatness: an interview with Franky De Smet Van Damme of Channel Zero ›