The Males – Her Golden Blood EP

Dirty, fuzz lit, and pungently unfussy, the sound of UK noise rock band The Males is a proposition which just crawls under the skin and gets feet right through to passions dancing to its feverish tune. The band’s new EP Her Golden Blood tells you all you need to know about the emerging band. Consisting of three songs which are just as grunge/stoner fuelled as they are noise spawned, it is an encounter which does not make massive waves but ripples and smoulders very nicely to leave a lingering and raucously reminding indent in thoughts and emotions.

The Males was spawned from the creative coming together of guitarist Will Goldstone and vocalist/drummer Lewis Young at Bournemouth University during the mid-2000s. Eventually joined by bassist Ben Smith, the trio set forth as The Males and were soon drawing attention and eager ears towards their noise bred rock ‘n’ roll. With inspirations from the likes of Shellac, Black Sabbath, Jesus Lizard, Fugazi, The Melvins, the Misfits, Refused, Queens of the Stone Age and AC/DC spicing up their invention, the London based trio uncaged a self-titled demo in 2012, a raw and unruly incitement of sound sparking the imagination and a growing spread of fans. The single Wolves followed in the October of 2013 with a teaser from their debut EP, Golden Gates touching ears earlier this year. All has helped inspire keen anticipation for the new EP, an appetite easily and potently fed by Her Golden Blood and its potential drenched roar.

Opening track Cut Her Off from its first breath leads ears and feet into its immediate inescapable bait, punchy rhythms and raw riffing leading to addictive behaviour upon which sonic designs and the strong vocals add extra tempting. 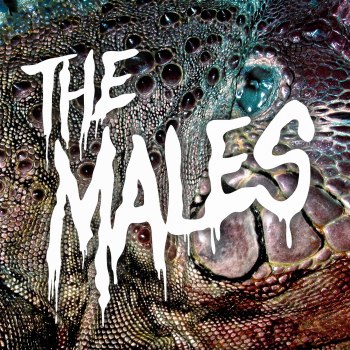 The song flirts with hints of bands, though the ones which most spring to mind and certainly not influences on The Males being as new as they, is Feud and The St Pierre Snake Invasion. There is an expectations feeding aspect to the song in some ways but also a more prominent refreshing energy and coarse rabidity. It is a tenacious encounter with caustic melodies, increasingly dramatic rhythms, and a glaze of sonic enticement simply luring the listener in further.

The track is a strong and masterful start to the EP which the following Golden Gates backs up solidly. It wraps tendrils of sonic coaxing around ears first, an acidic scuzz lined lure which is soon joined by weighty rhythms and an even bigger bass incitement, its tones bulging with devilish intent. The vocals again bring an expressive and eager revelry to the highly satisfying encounter though ultimately there is not quite the same spark of imagination to the body of the song as its predecessor. It certainly offers enough to intrigue and keep thoughts on their toes though, especially to the latter stroll of the track where it seems to find a more virulent persuasion with an irresistible groove.

The final song Hot Blood has an old school punk flavouring to its fiery waltz of moody basslines, agitated rhythms, and squalling riffs. It is hard to define who it reminds of but there is definitely a nostalgic tang to the track which colours its impressive enticing even more potently. The best track on the release, it is a compelling protagonist to imagination and ears, a track which hints at riots and brawls with its energy yet resorts to primal seduction for the main to ignite once again an already greedy appetite.

Her Golden Blood is not going to lead to declarations of The Males being the next big thing but it undoubtedly has the potential and weight to earn the band a stronger spotlight and reputation in their continuing ascent.

The Her Golden Blood EP is available now @ http://males.bandcamp.com/