Preying on ears with the primal snarl of early Killing Joke, the punk fury of Amen, and the raw salacious bloodlust of Frankenstein Drag Queens from Planet 13, UK metal punks Generation Graveyard has become one of the eagerly talked about new protagonists of the European horror punk scene, and it is easy to see why with the release of new EP, Lonewolves. The band’s official debut release, it is a predatory assault on the senses and a stirring incitement to thoughts and emotions. It is hard to say that it is going to be the most startlingly original thing you will hear this year yet the London quintet unleash their venom and antagonism with a blend of flavours and impassioned vitriol to stand apart from the crowd and excite with undeniably ferocious potential.

Since its conception in the latter part of 2009, Generation Graveyard has earned a strong and impressive reputation through their live performances which has seen the band share stages with the likes of Misfits, Anti-Nowhere League, The 69 Eyes, Black Breath, Viking Skull, Warrior Soul, The Defiled, and most recently supporting Breed77 on their full UK tour. Fusing rich essences of hardcore, rock n roll, black metal, and crust into their metal punk voracity, the band’s next big step hits potently out in sound and lyrical intent, casting hostility amongst things at life and urban isolation, society and social upheaval, and substance dependence. As suggested Lonewolves is not reshaping a scene but it does make it impossible to ignore or resist the band’s fury.

The release immediately stands intimidatingly over ears, stirring thing up with caustic riffs and short sonic taunts whose acidic discontent is punctuated by occasional thumps of rhythms. The entrance of Abominate/Desolate is a 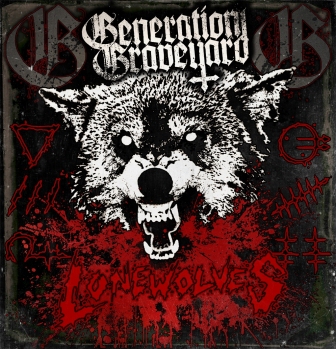 slow enticement which almost preys on its recipient before opening up a broader wash of guitar incitement around a sturdy stride. Once the drums start rumbling along with beats which seem to coax further the already impressive vindictive bass flirtation, the track takes to full hostile flight within its still stalking gait and the similar stance of vocalist Max’s grizzled growls. Dark addictive grooves and surges of scarring riffs continue to flourish within the brawling presence of the song, but it is the almost deceptively menacing bass and spiral of melodic guitar enterprise which leave the lingering impression of the strong and potent starter.

Things kick up another gear in attack and pleasure with Human Hive, the song scurrying urgently through ears from its opening breath and teasing attention with heavily poking beats within a maelstrom of sonic causticity. There is a more open contagiousness to the song than within its predecessor, a lure providing a dangerous and virulent seduction. Sonic groans and ravenous riffs stalk throughout the track’s rippling body, adding intimidation to the web of infectious persuasion and adversarial endeavour honed into one gripping confrontation. With Max offering a Casey Chaos like combativeness to his tones and the guitars an unrelenting and varied squall of abrasing enticement littered with thick hooks, the track ignites an already open appetite with ease.

The Empty strikes next, again a song making an initial quarrelsome impression veined by sonic bait clad in riveting invention and enticement. The track stomps and bustles with attitude and impatient ire, eager to start a fight or incite a riotous commotion. It is a pleasing and easy to embrace slab of unfriendly provocation but lacks the spark and quite simply the addiction forging qualities of the previous pair. Nevertheless it is another strong lure into band and release before the incendiary punk storm that is Deletist savages ears. It is as raw and as vicious as it gets on the release, every note and syllable a raucous enmity whilst the rhythms just puncture the body with their verging on malevolent antisocial attack. Like the last song it lacks some of the lures of certainly its successor but counters that with pure venom and hardcore punk voraciousness.

The title track takes over to steal best song honours, its Misfits like opening the doorway into the epidemically anthemic roar of the song. Rhythms and riffs spare little time to size up their victim, jabbing and raging respectively with the hunger and rabidity of a restless social uprising. Hooks and grooves play incessantly with the imagination whilst the group calls to stand up and roar simply provide the icing on the ridiculously thrilling cake. It is a great finale to an increasingly impressing release though certainly on the CD there is also a bonus track, the Stereo Juggernaut remix of Human Hive which offers a more than decent stomp to fling limbs to.

Lonewolves is a dramatically healthy and intensely promising introduction to Generation Graveyard, one easily showing why the fuss from those in the know towards the band. You feel though that there is much more to come and be explored within the band ahead than shown on the excellent release, which makes their future rather exciting.

The Lonewolves’, EP is available through all stores on Monday 21st July.