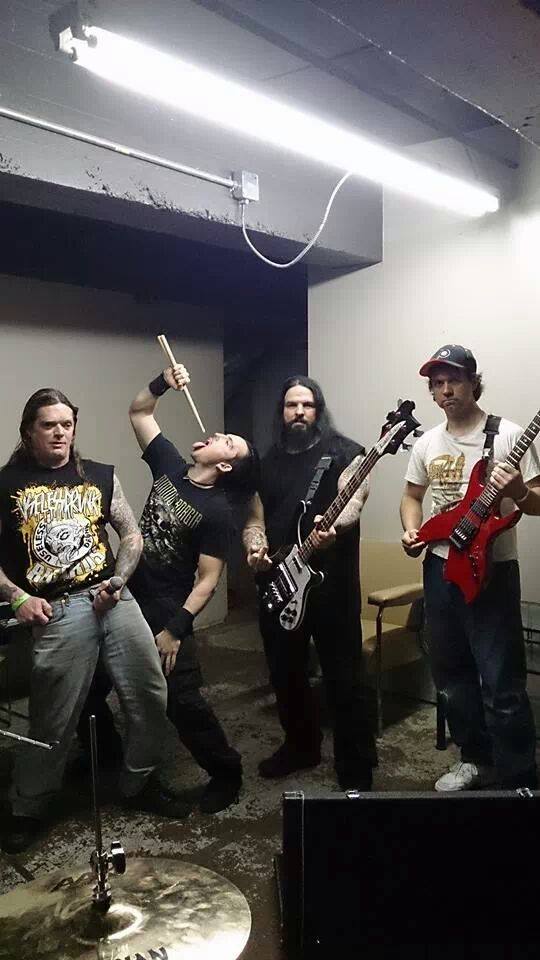 The first album since their return, Lesch-Nyhan Syndrome makes a ravenous and richly satisfying confrontation from US death metallers Lesch-Nyhan. The successor to the band’s 1991 demo Indistinguished Remains, the seven track savagery is a rewardingly imposing and thrillingly incessant beast of a proposition, a bestial encounter recalling the seeds and original toxicity of the Philadelphia quartet whilst equally holding an unhealthy dose of modern intrigue and fresh faced twists. It is not an album to blow extreme metal away but certainly a ravaging to make Lesch-Nyhan’s comeback a highly joyous and thrilling one.

Formed in 1989 by vocalist Gary Hadden with brothers, Mark (drums) and Anthony Delacandro (guitar), Lesch-Nyhan was soon completed by bassist Greg Oreski and guitarist Mike Carr. Quickly getting to play live shows with the likes of Suffacation, Incantation, Crucifier, and Ripping Corpse, the band released their demo in 1991 from which the band was invited to play a showcase in front of numerous label representatives. What followed though was the demise of the band; a slow falling apart which new members could not bring any halt to with the band stopping in 1994. Fast forward to 2012 and a discussion between Hadden and guitarist Rob Vanderveer (a member of the last line-up of the band), about reigniting things, to “Put our stamp on this shit”. A year later saw Lesch-Nyhan reform with a re-issue of Indistinguished Remains on Horror Pain Gore Death Productions, just as the new album. With guitarist Jack Carmichael, bassist Chris Miller, and drummer Mark Stainthorpe alongside Hadden, Lesch-Nyhan has produced a riveting scourge of sound and intent with Lesch-Nyhan Syndrome, a furious hostility sure to excite those with an appetite of bands such as Autopsy, Bolt Thrower, Carcass, Gorguts, Immolation, and Napalm Death.

Recorded live in the studio helping to bring the raw brute creative force of Lesch-Nyhan to life, the album opens with World Destruction, a track as expected from its title with all the hostility and rancor to bring all before it to its

knees. It also comes with a passions binding groove which from its first breath grinds and worms deeply into the psyche as rhythms cascade voraciously down on the senses. Complete with the barbarous rancor of Hadden’s throat and the nagging contempt of the bass, it is an irresistible blast of insidious feuding which ignites appetite and passions just as forcibly as the album itself.

Its stunning start is not quite matched by the following Septic Hole and Flock Of The Misfortunate, though it is more to do with its might than their failings. The first of the two again is offering a scathing infection soaked groove around with rhythms bring a barbaric unpredictability and guitars a sonic smog of contagious endeavour. Vocally Hadden lurches syllable after syllable across the senses, his delivery breeding a pestilential persuasion which is as sinister and merciless as the predacious sounds scarring his way. It is another masterful proposition if without bringing too many surprises, similarly as its successor. The album’s third track prowls with purposeful weight and predation, every riff and rhythmic provocation concentrated in its oppressive incitement which an emerging fiery but respectful groove cannot defuse. With the vocals at their most demonically intimidating and caustic, the track sends primal shivers down the spite but fails to find the same spark to ignite the passions as the opener and subsequent tracks hold.

Bathed In Phlegm returns the senses to a tempestuous torrent of frenetic riffs and rhythms bred from the darkest despair. It is a storm which has a rein on its hunger though, switching intensities of gait and ferocity for a filth clad waltz of insurgent sounds and rabid animosity which ebbs and flows in its voracity and ultimately success. To be fair though it is a proposal which ears and emotions welcome with open submissive arms, but one again only stirring up the passions rather than igniting them. The following Regurgitation Through Decapitation has little problem in seizing imagination and those passions, such its corrosive beauty and invention. Marking the moment where the album reveals it’s most potent and addictive nature, the song thunders against ears with a wall of barbaric rhythms and an intensively fused swarm of riffs. It is tsunami of spite and malignancy turned into a sonic vendetta in turn driven by a great dual squall of vocal spite from Hadden feverishly backed by Miller. The song stomps and rages with little regard for the health of its recipients, bass and drums crafting a frame of tortuous entrapment which any dungeon would be proud of whilst the guitars and vocals lay waste with an emotion violation of hellacious enterprise.

The glorious rhythmic coaxing which brings the title track into view is one of those instinctive baits there is no resistance to, an insatiable coaxing which only increases its toxic potency when aligned to the serpentine bred vocal cancer brought by Hadden. It is not long before the enthralling leviathan tones of the bass stalk air and guitars spread their caustic waves, the emerging blend of ferocious rapaciousness only reaching deeper into the psyche and greedy hunger inspired by the album. Roving with pack like relentlessness, the track is a predator of sound and bestial appetite, its grinding incitement and gutturally shared narrative an evil suasion to unrelentingly and sublimely excite the whole body.

Lesch-Nyhan Syndrome is brought to a powerful close by Internal War And Hate, a final purge of hope and security brought with an increasingly dangerous consumption of single minded grooves and scarring riffs within a network of bass rabidity and rhythmic enmity. It is an outstanding end to a thrilling encounter, not one as we said to turn extreme metal on its head but a release to easily place Lesch-Nyhan back in the heart and intensive spotlight of death metal.