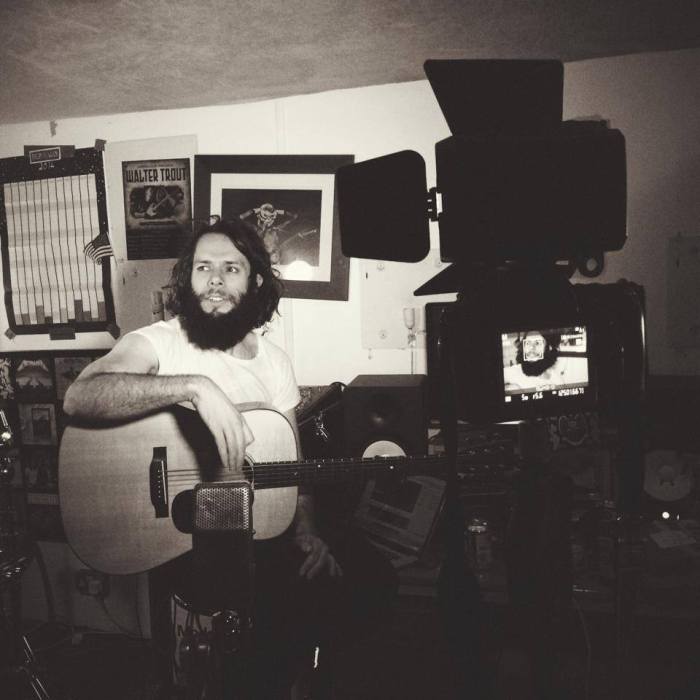 From the release of his striking and impressive The Damage EP of 2012 there has been a healthy dose of acclaim placed around UK musician Thom Bowden and keen anticipation bred for his debut album. This week sees the unveiling of Searching The Brittle Light and those hopes are sure to be satisfied with the ten track encounter. It is not a release which impacts as potently and consistently as Bowden’s previous proposition but certainly it brings another wash of the rich potential within his songwriting and highly agreeable sound.

Surrey based, Bowden takes inspirations from the likes of The White Stripes, Nick Drake, Dresden Dolls, Fugazi, and Neil Young into his imagination catching enterprise. As mentioned The Damage EP brought strong attention and responses from fans and media alike, something you can only see the album repeating and increasing. A collection of songs written when Bowden was ‘at a low point in his life’, the album was recorded with and mixed by Steve Albini (Pixies, Nirvana, Manic Street Preachers) and mastered by Steve Rooke at Abbey Road. Inspired by some advice offered whilst the artists was in Chicago by Kim Deal, the album brings a raw honest intent and beauty to the ears. There is also a slightly more adventurous variation across the songs than on the last EP, a move you can only respect and embrace even with its slightly mixed success in comparison to the consistency of the previous release.

With guitarist Richard George and drummer Steve Matthews alongside Bowden, the album opens strongly with Click!, a song taking mere seconds to seduce ears and thoughts with its opening seduction of sultry blues kissed flames.

The slow swipes of guitar are soon joined by punchy beats and a darkly drawing bassline before the great expressively twanged and unpredictable voice of Bowden starts revealing the lyrical narrative. His voice and a rich essence of the music has a Frank Black like temptation which only adds to the smouldering enticement, an invitation which burns increasingly brighter as the song evolves and spreads its senses sizzling charms. The feisty stride of the track is an incessant call on the passions whilst the increasingly warped vocal delivery which by this point has a more My Red Cell essence, Bowden sounding similar to frontman Russell Toomey of the defunct Welsh band, only captivates with mischievous bait. It is a strong and gripping start to the album which without lighting fires sets up a keen appetite for its offering, a hunger soon spicily fed by the second song.

So So Long makes a controlled and infectious entrance, guitars and rhythms a simple but entrancing lure to which Bowden’s grazing tones lay angst spawned invention and caustic passion. The track never lifts its gait to anything more than a slow determined canter but with expulsions of sonic heat and expressive melodic energy, the song irresistibly wins over ears, again thoughts of the previously mentioned Welsh band coming to the fore. It is a masterful slice of sonic magnetism bringing a licking of lips. Its potent presence is followed by the ballad My Arms, the song a union of voice, guitar, and emotive textures which certainly stirs up thoughts and attention but brings an unexpected and underwhelming halt to the thrust of the album. Obviously a highly personal offering, it is hard and impossible to dismiss, or not enjoy, but the song is a wrongly positioned rein on the passions for personal preference.

The following Control brings the temperature and energy back with accomplished and thrilling enterprise. Rhythms roll invitingly through the ears as guitars swerve and let fly with melodic scythes of enticement and sonic tempting which reawakens a thirsty imagination. There is a definite eighties new wave feel to the track, another shade of familiarity which in different designs attractively flirts with most of certainly the rockier numbers on the release. As it continues to tease and impress, the glorious song casts a web of inventive guitar endeavour, melodic mischief, and sonic alchemy to treat and seduce the emotions; it all aided by an emerging Pixies sounding toxicity.

Next up How About It? slips into a gentler hug of emotive intimacy and melodic caressing around a spine of shadow involving rhythmic invention from drums and bass. It is a slowly burning temptation which takes longer than certainly the previous song to persuade but emerges as a deliciously riveting and evocative highlight of the release. Its broody success is followed by the forty five second instrumental …, a piece which is just there before the outstanding With Pace unleashes its grunge spawned sinews and punkish desires. As its title suggests, the track romps with swift, heavily thumping feet and fiery riffs around which rapacious grooves and fuzz encased vocals flirt and rage respectively. There is no escaping a Nirvana comparison but as elsewhere it only spices up the brawling encounter. The album and Bowden seems to wear inspirations on their sleeve, definitely more than the EP, to predominantly bring stronger aural colours to embrace.

The raucous air and exhaustive pleasure of the triumph is swiftly tempered and brought back to the ground with the folk seeded reflection of The Water Is Cold, a decent and strikingly performed song but again an underwhelming shift in scenery and suasion. Its emerging emotional stringed flight and expressive vocal coaxing does light thoughts and feelings, but there is the thought that the track would be better served elsewhere in the order or set on a separate release to find the reaction it deserves.

The bluesy plaintive cry of In The Ground comes next to stir up a nest of satisfied thoughts and emotions with its persistent tendrils of sonic imposing and fiery enticement around another roar of vocal lament and expression. It is a track which you want more of before the final elegant balladry of Sweet And Tender brings the album to a musically and lyrically rueful close. Soaked in more folk seeded melancholy it is a captivating end to a fine if inconsistent album.

Searching The Brittle Light is an impressive next step for Bowden but because of its intent and bravery in stretching its boundaries may be fails to match its predecessor. The songs are a clear step on in craft and maturity let alone invention but the album feels like two releases in one which defuses its impact whereas separating them into EPs of rock and ballad seeded tracks might have brought the showcase and clarity they deserve. Nevertheless Thom Bowden is an exciting talent which will be creating remarkable and keenly devoured statements ahead, we for one wait eagerly.

Searching The Brittle Light is available digitally, on vinyl, and CD now via Audio Candle Records and @ http://thombowden.bandcamp.com/