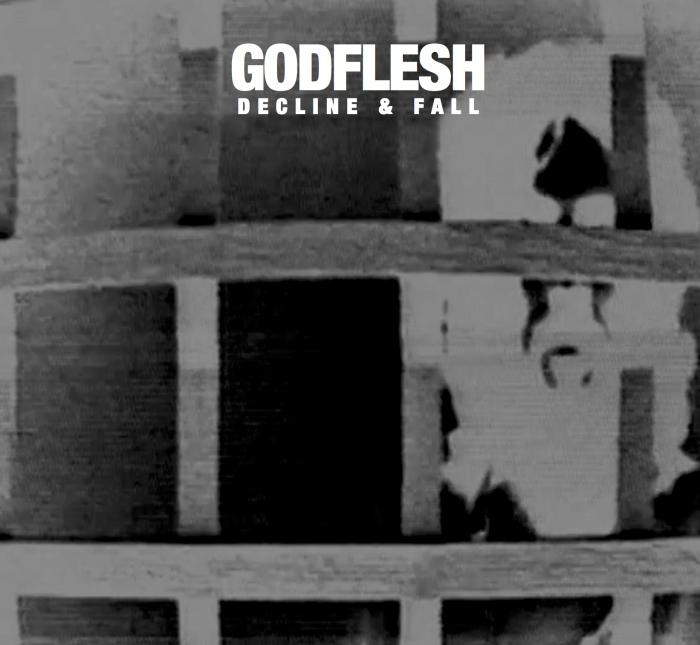 There are some bands you always find a soft spot for in the vast ranks of likes and thrilling encounters which accost the senses and imagination over a lifetime, and Godflesh is one of the most impacting and self-sustaining examples. The prime provocateurs of not only industrial but metal full-stop, the band even in the few years they were ‘AWOL’, continued to incite and inspire personally and emerging propositions, their influence constantly openly audible in new bands and sounds. Now the UK band has unleashed its first new material in 13 years through the carnivorous ear seduction of the Decline & Fall EP. Birmingham duo Justin Broadrick (Jesu, Palesketcher, Final) and GC Green has twisted the richness of their early sounds with the experiment intrusiveness of latter inventions to give birth to an exhaustingly primal and vindictively fresh predator. The four tracks making up the release are ravenous tempests of industrial toxicity, metallic hostility, and punk rabidity, a brew which simply steals the passions just as the band has done so many times before.

Also acting as a potent teaser for the band’s new album A World Lit Only By Fire, due out this Autumn, Decline And Fall as well as rigorously casting out a new net of virulently antagonistic enticement also holds a nostalgic strain of bait most notably in opening track Ringer. As well as unearthing past memories of the band’s earlier forages into the psyche there is a raw but definite early Killing Joke repetitious tone and bait to its carnal charm. A sonic wash disturbs ears first, brewing up a portentous air which heavily cascading rhythms and bestial riffs pounce upon with greedy ferocity. The beats stamp with a military like enmity and precision whilst the bass of Green brings arguably it’s most primal and tenacious malignancy of sound yet. It is a delicious and glorious savaging which prowls imperiously alongside the feverishly caustic scrubs of guitar and the loathing fuelled monotones of Broadrick, the years having seemingly only increased his scornfully raw and imposing tones. The track is pure primal evil, a contagious tension soaked malice to devour greedily.

The following Dogbite immediately infest ears and psyche with sonic squalls which seductively sway with wanton designs whilst the bass brings its own salacious swagger to the emerging animus. The track has its own unrelenting gait to its predecessor but equally suffocates and consumes with a base fury which resourcefully blazes with cold flames. Repetition is one of the most instinctive addictive tools in music, along with discord, and there are few who can swing that bait so potently and seductively as Godflesh. The track crawls over thoughts and emotions with the gnawing patience of a dog, every chewing snarl and intensive lick of sonic persistence an irresistible incitement.

As impressive as the EP is to this point, it touches perfection with Playing With Fire. The track is simply an inescapable epidemic, its harsher industrial climate and alienating sonic web pure destructive and addiction spawning manna. We mentioned new bands being influenced by the duo but here alone you equally know and recognise the well which the likes of bands such as Fear Factory and Prong drank inspirationally. That mentioned discord is a passion igniting flavouring around the vocals whilst again bass and rhythms frame the maelstrom of sonic vendetta and enterprise with sheer grudge clad might.

The title track brings the release to a close, its viscous feud of sound a corrosive abrasing sculpted into another magnetically inspiring and senses grinding, almost cathartic challenge. The least dramatic in its attack and incessant in its confrontation, the track is the most inventively tangled weave of fascination on the EP but also the least gripping, though to be fair it still chains imagination and ardour drenched passions without mercy.

If the Decline & Fall EP is a hint of the album to come we are in for something special once again from Godflesh. We admit we might have a slightly blinkered appetite for the band and their sounds over the years but it cannot disguise the impressive and blistering might of the new release, or the impatient anticipation of the impending full-length.

The Decline & Fall EP is available on Avalanche Recordings now and @ http://godflesh1.bandcamp.com/releases