Still fresh around the gills, having formed in the last weeks off 2013, UK rock band Inlaze lay down a rather compelling introduction with new single Shallow. A feisty stomp of alternative rock and grunge with a just as healthy dose of punk and fuzz revelry, the song is a virulently contagious and riotously addictive brawl of sound with a temptress like seduction at its core. Like a cross between Feud and early Foo Fighters with a veining of Reuben-esque aggression and sultry Allusondrugs temptation, the band’s sound flames voraciously around ears on the single, sparking a just as keen fire in the passions.

Hailing from Wakefield in West Yorkshire, Inlaze consists of vocalist/guitarist Cauley Pritchard, guitarist Ollie O’Brien, bassist Joe Tabz, and Tom Whiting on drums. March this year saw the release of their debut two-track release Waste​/​Fall, a pair of songs which explored a more shoegaze mesmerism upon the band’s firmer rock canvas of sound. Both songs made a potent attention coaxing declaration to spark intrigued interest but it is Shallow which really ignites a hungry appetite for itself and the band ahead.

Riffs and rhythms cascade down on ears within the song’s first breath, jangling over and jabbing the senses for a feisty opening. The bass of Tabz is an instant lure too, its throaty growl contagious bait over which the chords and 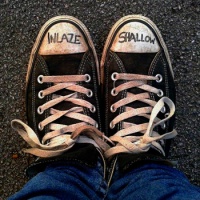 melodies of Pritchard and O’Brien cast their acidic yet richly appetising colour. Pritchard’s smooth and energetic vocals equally flourish over the commanding rhythmic spine with the whole riveting mix forming a virulent persuasion for feet and emotions to climb upon. The song also has a raw breath to not only its production but its scuzz spiced touch which only accentuates the infectiousness of its presence, especially within the incendiary finale, it a riot of call to arms vocals and voracious urgency.

Shallow suggests that Inlaze is a band we should all be paying attention to, and we for one are not going to deny its insistence as we wait impatiently for the band’s next foray into ears.

Shallow is available now as a buy now name your price release @ http://inlaze.bandcamp.com/track/shallow