Hessian/Primitive Man –The Abyss Stares Back #2 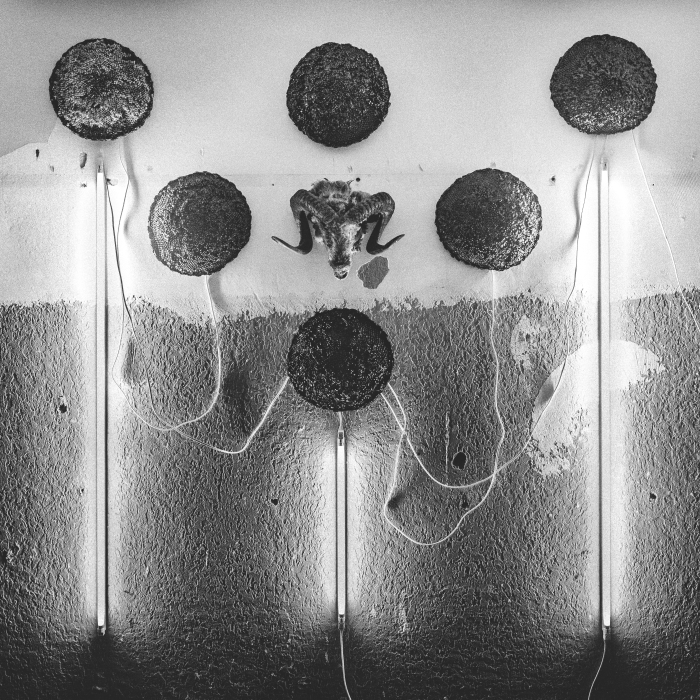 Continuing their series of split releases The Abyss Stares Back which began with the impression union of Amenra and Vvovnds in May; Hypertension Records unveil the second instalment of dark consumption with a two track union between Hessian and Primitive Man. The second of a planned five splits, The Abyss Stares Back #2 brings again exclusive propositions from the two protagonists, a pair of tracks which drag the senses and emotions through cavernous, insidious landscapes but with the sweetest toxic lures which feverishly ignite the imagination and fears.

With future releases in the series to include Nihill, Scott Kelly, Drums Are For Parades, Mathieu Vandekerckhove, and Alkerdeel, Hypertension has already set a gripping standard and presence for the series through #1 and #2, the newest a startling and compelling onslaught of virulent hostile seduction. As all in the series it is wrapped in the artwork of Tom Vanuytrecht and with the photography of Stefaan Temmerman, but consumes and envelops in its own unique voracity with frightening intensity and ridiculously easy success. Both bands on the release are united in the devil’s oppression whilst providing an individual merciless savagery and invigorating violation to maybe unwillingly but certainly rewardingly bask in.

Having been rigorously persuaded by their debut album Manégarmr, appetite and anticipation for Hessian’s contribution to the release was keen and swiftly satisfied by the Belgian band and their track Inward Dawn. Consisting of guitarist Levy Seynaeve (of Amenra), drummer Tim Bryon (of The Black Heart Rebellion), vocalist Bram Coussement, and bass player Kenneth Vanhoutte, the quartet threaten as they lumber in upon heavily punching rhythms and a sonic web of antagonism. It is a disarming sweep of sound and confrontation lorded brutally over by the vocal causticity of Coussement but one which swiftly enslaves the passions through the rolling and inciting drum enticement of Bryon. Like a puppeteer he directs and cages the imagination so the scorched sonic endeavour of Seynaeve can layer web upon furious web of deviously captivating and searing design. The repetitious lure of the track aligned to the rapacious rhythms is the prime bait though; it’s intermittent enticement the irresistible spine to which emotional enmity and aural chastisement explores their rich potency and hostile animosity. Gloriously insatiable and contagiously persistent, the encounter is a fall through the depths of organic persuasion, a sirenesque anthem come hymn to the primal core of body and emotion. The track is pure addictive venomous alchemy, Hessian reaching deeper into their rapacious ingenuity than ever before for a seriously hypnotic and ruinous triumph.

Primitive Man swamps the senses in a darker corrosive tsunami than the pestilential but voraciously mesmeric suasion of Hessian, though neither you would trust with your soul. Their track Unable takes mere moments to invade and permeate body and feelings, its lumbering sludge tar coating senses and thoughts with suffocating efficiency. As shown on their impressive debut album Scorn, the Colorado trio of Ethan Lee McCarthy, Jonathan Campos, and Bennet Kennedy, venture into the lowest, base primal sounds and provocation, unleashing sonic swarms as lethal and disorientating as the destructive slab of slow rhythms and maliciously devouring intensity beneath. Similar to Hessian though, there is a potent lure of addiction forging enticement working away, warped grooves and anthemic rhythms breaking free just enough to entangle fevered appetite and eager passions with their riveting coaxing. It is often an understated but constantly infectious trapping within the malevolent corners of the song, a potent seducing for the same senses and psyche which are being unrelentingly worn away and viciously smothered by the doom entrenched pestilence. Closing on a brawling tempest of vitriolic energy and punk infused urgency, the track is a towering predator which easily draws submission for its hellacious fury.

Both tracks on the split are exhaustingly glorious, though of the pair Hessian has a toxin which steals body and mind for a truly lingering pleasure. Both also provide stunning introductions to newcomers to the bands and a raw hint of further things to come for fans, each breeding further waves of anticipation. Hypertension Records with their first two episodes of The Abyss Stares Back easily ensure the forthcomings offerings will be eagerly awaited, and with each split pressed on 180gr. vinyl for a one time only release of 500 copies, time procrastinating is the way to missing out on, certainly in the case of #2, one of the year’s finest essential releases.

The Abyss Stares Back # 2 is available now @ www.hypertensionrecords.com.